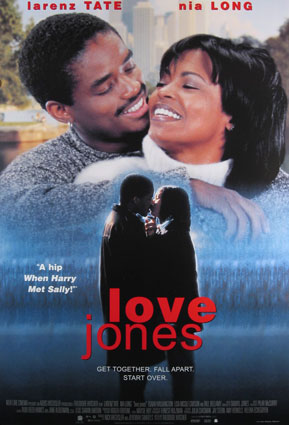 "Love Jones" is a 1997 written and directed by . and portray young romantic upward-mobile navigating through Chicago's club culture.

"What do you do after love at first sight?" That's the question posed in this romantic comedy-drama set in Chicago. Darius Lovehall () is a who is giving a reading at the "Sanctuary", an upscale night club presenting and to a clientele. Shortly before his set, he meets Nina Mosley (), a gifted who has just lost her job. They exchange small talk, and Darius makes his interest clear when he retitles a love poem "A Blues For Nina". A mutual attraction is sparked between them, and Darius invites himself back to her place to persistently ask her out. The relationship turns seriously sexy when they have sex on the first date, but neither Darius or Nina are sure where to go next after this promising start. She's just gotten out of a relationship and isn't sure if she still cares for her old boyfriend or not, while Darius' buddies read him the riot act for wanting to give up his freedom so early on in the game. "Love Jones" was the debut film for writer and director , and it is already considered a classic work in African-American cinema. , , and lead the supporting cast.

*The success of "Love Jones" is partially responsible for an increased interest in s and the art form as a whole in the late 1990s and early 2000s. In 2002, began airing "Russell Simmons Presents Def Poetry Jam", hosted by actor/rapper .
*Two of the poems recited by Nia Long's character Nina were written by and are included in her book "Like the Singing Coming Off the Drums: Love Poems."
*Internationally renowned former bodybuilder counts "Love Jones" as one of his favorite films. He named his son Darius after Larenz Tate's character, and his daughter Nina after actress Nia Long ("" magazine, September 2000).