The Red Ensign, as currently used by the United Kingdom's Merchant Navy 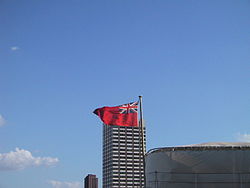 The Red Ensign of the United Kingdom in use in London

The Red Ensign or "Red Duster" is a flag that originated in the early 17th century as a British ensign flown by the Royal Navy and later specifically by British merchantmen. The precise date of its first appearance is not known, but surviving receipts indicate that the Navy was paying to have such flags sewn during the 1620s. It is currently used as the civil ensign of the United Kingdom.

In 1674, a Royal Proclamation of Charles II confirmed that the Red Ensign was the appropriate flag to be worn by English merchant ships. The wording of the 1674 proclamation indicates that the flag was customarily being used by English merchantmen before that date. At this time, the ensign displayed the English Cross of St George in the canton. The Red Ensign was also flown by ships of the Royal Scots Navy, with a Saltire in the canton. 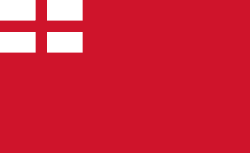 English Red Ensign as it appeared in the 17th century. 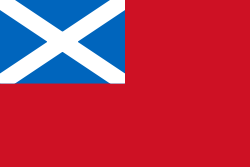 The Scottish Red Ensign, flown by ships of the former Royal Scots Navy before it was merged into the Royal Navy.

In 1707, Acts of Union, ratifying the Treaty of Union that had been agreed the previous year, were passed by the parliaments of England and Scotland, thereby uniting the Kingdom of Scotland with the Kingdom of England (which included the Principality of Wales) into a new state with the name Great Britain. This resulted in a new red ensign which placed the first Union Flag in the first quarter. The new design of the Red Ensign was proclaimed by Queen Anne, who indicated that it was to be used by both the navy and ships owned by "our loving subjects." This was the flag that flew over the thirteen American colonies before the American Revolution and was a precursor to the flag of the United States.

In 1801, with another Act of Union, Ireland joined with Great Britain to form the United Kingdom of Great Britain and Ireland, which resulted in the present Union Flag being added to the canton. The St Patrick's Cross was added to the Union Flag and, accordingly, to the first quarters of the British ensigns.

In 1854, the Merchant Shipping Act included a specific provision that the Red Ensign was the appropriate flag for a British merchantman. This provision was repeated in successive British shipping legislation (i.e., 1889, 1894 (section 73) and 1995).

Until 1864, the Red Ensign was also the principal ensign of the Royal Navy, and as such it was worn by ships of the Red Squadron of the navy, as well as by those warships that were not assigned to any squadron (i.e., those sailing under independent command). The white ensign and the blue ensign were also used by the Royal Navy.

Many in the Admiralty felt that the Royal Navy's use of three separate ensigns (i.e., the red, white, and blue) was outdated and confusing. Many also felt that steam merchantmen should be clearly distinguishable from warships. In July 1864, an order-in-council provided that the White Ensign was the ensign of the Royal Naval Service. The Blue Ensign was designated as the proper national colours for ships commanded by an officer of the Royal Naval Reserve, and (with an appropriate badge) as national colours for ships in government service. The Red Ensign was assigned to British merchantmen. This basic structure remains today.

A few years later (1867–1869), the Admiralty determined that the blue ensign charged with an appropriate badge in the fly would be used as the ensign by those ships in the armed, or public, service of the many British colonies. Most British colonies needed to use the blue ensign due to the fact that most had government vessels; some colonies, such as South Australia, had warships. As a result, the Blue Ensign was used throughout the Empire and thus became the model for the flags used by a number of colonies and former colonies in the British Empire. At the same time, the red ensign (which was designated in 1864 as the flag for merchant shipping) was used by merchantmen of those colonies which obtained an Admiralty warrant. Not all colonies obtained an Admiralty warrant, however; the ones that did tended to be larger, and included Canada (1892); New Zealand (1899); Australia (1901); South Africa (1910) and Cyprus (1922). Those areas that did not have an Admiralty warrant used the plain Red Ensign, although unofficial local versions of the Red Ensign were used.

Today[update], Red Ensigns charged with the local emblem are available to be used by ships registered on several of the component registers of the Red Ensign Group: Bermuda, British Virgin Islands, Cayman Islands, Falkland Islands, Gibraltar, Guernsey, Jersey, and Isle of Man. 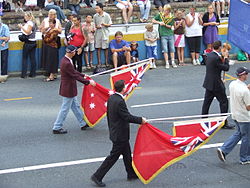 The British Red Ensign being paraded alongside the Australian Red Ensign during the 2007 Anzac Day celebrations in Brisbane, Australia.

The Australian Red Ensign, is a red version of the Australian Flag and is a reserved civil ensign. From 1901 to 1954 the flag was used as a civil flag, to be flown by private citizens on land, while the government used the Blue Ensign, reflecting British practice. In 1941, Prime Minister Robert Menzies stated that there should be no restrictions on private citizens using the Blue Ensign on land, and in 1947 Prime Minister Ben Chifley reaffirmed this position, but it wasn't until the passage of the Flags Act 1953 that the restriction on civilians flying the Blue Ensign was officially lifted, after which use of the Red Ensign on land became a rarity. Under the Navigation and Shipping Act 1912 and the Shipping Registration Act 1981, the Red Ensign remains the only flag permitted for use by merchant ships registered in Australia. Pleasure craft may use either the Red Ensign or the national flag, but not both at the same time.

Bermuda, uniquely among British overseas territories, uses the Red Ensign as its land flag as well as at sea. The flag has apparently been flown unofficially since Bermuda's arms were granted in 1910. There appears to be no formal adoption of the Bermuda flag for use on land, although a 1969 Foreign & Commonwealth Office circular mentions its use. The white and green shield has a red lion holding a scrolled shield showing the sinking of the ship Sea Venture one mile off the coast of Bermuda in 1609. The ship struck a reef after being caught in a hurricane. The Red Ensign is likely to have been chosen as Bermuda's land flag due to Canadian influence. (In the early twentieth century, Canada made use of the Red Ensign defaced with the Canadian shield as an unofficial land flag). Bermuda's 2002 shipping legislation officially recognizes the flag as an ensign for Bermudian registered ships. Prior to 2002, the flag was often used unofficially by Bermudian ships as an ensign, as reflected in Admiralty correspondence dating back to the 1950s. Bermuda (civil) Government vessels and maritime services use the defaced blue ensign, which is flown both from vessels and from shore facilities.

The term Red Ensign is often used to refer to the Canadian Red Ensign, the former de facto national flag of Canada. It was informally adopted following Canadian Confederation in 1867 and, from 1892, it was the official flag for use on Canadian merchant ships. On land, however, the official national flag was the Union Flag. Despite its unofficial status, the Red Ensign was widely used on land as well. In 1924, the Red Ensign was approved for use on Canadian government buildings outside Canada, and from 1945 for those inside Canada as well.

Canada's Red Ensign bore various forms of the shield from the Canadian coat of arms in its fly during the period of its use. The picture shows the official form between 1957 and 1965. Canada also used a blue ensign for ships operated by the Canadian government and for the Royal Canadian Navy.

The Red Ensign served as Canada's national flag until 1965 when, after considerable debate, it was replaced by today's Maple Leaf Flag. The Red Ensign is still popular amongst traditionalists and monarchists and even though the flag is no longer in use nationally, the original provincial versions of the flag, with the coat of arms of the respective provinces in the fly, continue as the official flags of Manitoba and Ontario.

The Hudson's Bay Company also used a Red Ensign as their corporate flag.

Indian Red Ensign with the Star of India

The Crown dependency of the Isle of Man was granted a red ensign, with the three legs of Man in the central fly, for use by ships registered on the Island, by Royal Warrant dated 27 August 1971.

The Red Ensign with the great seal in the fly was considered Newfoundland's unofficial flag from 1904 until 1931, at which point it was officially legislated as the Dominion of Newfoundland's "National Colours" to be flown as Civil ensign, with the Union Jack being legislated as the national flag at that time as well. The Newfoundland Red Ensign was then used as official commercial shipping identification until the mid-1960s.[1] The badge in the flag consists of Mercury, the God of Commerce and Merchandise, presenting to Britannia a fisherman who, in a kneeling attitude, is offering the harvest of all the sea. Above the device in a scroll are the words Terra Nova, and below the motto Haec Tibi Dona Fero or "These gifts I bring thee." The seal was redesigned by Adelaine Lane, niece of Governor Sir Cavendish Boyle in 1903.

Example of a Red Ensign used by some New Zealand Māori.

The New Zealand Red Ensign with the Union Flag in the first quarter, and the Southern Cross, represented by four five-pointed white stars featured in the fly became the official flag in New Zealand for merchant vessels in 1901.[2] Previously a plain red ensign was used.

The red ensign may continue to be flown on land in Māori areas or during Māori events under the Flags, Emblems, and Names Protection Act 1981[3] in recognition of long held Māori preference for red flags. New Zealand law allows the defacement of the flag in accordance to Māori custom in which white capital letters identifying a particular family or Māori tribe are added. In the case of the flag on the right, TAKITIMU refers to a grouping of Māori tribes descended from the crew of the ancestral canoe of that name.[4]

Today, private and merchant craft can choose to fly the Flag of New Zealand (which is a blue ensign) or the Southern Cross red ensign.

The Red Ensign, defaced with the shield of the national coat of arms, was authorised as the merchant ensign of the Union of South Africa on 28 December 1910.[5] From 1912, the shield was displayed on a white disc. The ensign was superseded by the national flag with effect from 1 January 1960, in terms of the Merchant Shipping Act 1951.[6]

The Red Ensign with the shield was also used on land as a de facto national flag from 1910 until 1928. There was also a Blue Ensign which was the official ensign of government-owned vessels, and was also flown at South African offices overseas.

The most notable usage of the Red Ensign as a national flag was when General Louis Botha flew the flag over Windhoek in what was then German South West Africa after the town's occupation by South African troops in 1915.

The use of the Red Ensign as a national flag ended with the introduction of a proper national flag under the National Party government in 1928. This was preceded by the South African Flag Controversy of 1925 to 1928.[7]

Sea Scout groups within The Scout Association can be Royal Navy Recognised, and are allowed to fly a defaced Red Ensign to signify this. 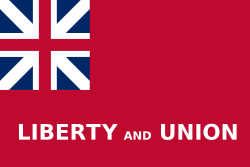