The Integrated Deepwater System Program (IDS Program or Deepwater) is the 25-year program to replace all or much of the United States Coast Guard's equipment, including aircraft, ships, and logistics and command and control systems. The $24 billion program includes equipment that will be used across all missions.

When the program is complete, the interoperable system will include new cutters and small boats, a new fleet of fixed-wing aircraft, a combination of new and upgraded helicopters, and land- and cutter-based unmanned aerial vehicles (UAVs). All of these assets will be linked with Command, Control, Communications and Computers, Intelligence, Surveillance and Reconnaissance (C4ISR) systems. Performance-based logistics is also an aspect of the contract.

The Coast Guard's mission includes policing the territorial waters of the United States, identifying anomalies and deterring threats to protect U.S. shores. During the 1990s, it was determined that the assets and capabilities needed to complete this mission were antiquated and becoming obsolete. An evaluation by the Coast Guard determined that seven of their nine classes of deepwater assets would reach the end of their planned service life over the following 15 years, making it older than all but two of 42 worldwide naval fleets of similar mission and size.

In 1993, the Commandant's Office of Operations formally acknowledged that the Coast Guard needed a long-term strategy to recapitalize its inventory of 93 cutters, 206 aircraft, and supporting systems. In 1998 the Coast Guard issued a Request for Proposal (RFP) for industry teams to bid in proposal a package of assets and systems to meet an identified set of Coast Guard mission requirements. This unique "performance-based approach" to modernization and replacement of the Coast Guard deepwater fleet was competitively bid on by three teams: One led by Science Applications International Corporation (SAIC), one led by Boeing, and one led by Integrated Coast Guard Systems LLC, a joint venture of Lockheed Martin and Northrop Grumman established in June 2001 and jointly owned and fully guaranteed by both companies. On June 25, 2002, the Coast Guard awarded the base-term agreement of the then 20-year, $17 billion Deepwater contract to Integrated Coast Guard Systems (ICGS).

During the first three years of the initial five-year contract the Coast Guard re-baselined the Deepwater program in July 2005, expanding requirements due to post-9/11 mission needs, which expanded the program to 25 years and a total of $24 billion.

The Program Executive Offer (PEO) for Deepwater since June 8, 2007 is RDM Ronald J. Rábago. His predecessors include RADM Gary Blore and the "founding father of the IDS", RADM Patrick M. Stillman.

Integrated Coast Guard Systems has participated in joint Integrated Product Teams (IPTs) with the Coast Guard since the inception of the Deepwater program. Oversight of contractor performance by the government is largely non-existent, due to contract language developed by the contractor. A major performance metric was IPT meeting attendance.

ICGS subcontracts with more than 600 suppliers in 41 states, as well as manufacturers from around the world. 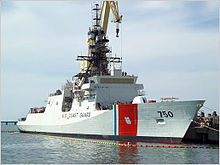 USCGC Bertholf in the builder’s yard

One of the key components of the Deepwater solution is the National Security Cutter (NSC). These eight Legend-class cutters are designed to replace the aging 378-foot (115 m) Hamilton-class cutters currently in service. The NSC will have a length of 418 feet (125.2 m), be powered by a gas turbine engine with two auxiliary diesel engines, and be capable of 12,000 nautical mile (22,000 km) voyages lasting up to 60 days.

The new class of NSCs will carry an MK 110 57 mm gun and will be equipped with a stern launch ramp for launch and recovery of the Short Range Prosecutor (SRP) and the Long Range Interceptor (LRI). They will also be equipped with a state-of-the-art C4ISR suite. A contract for the third ship was issued in August 2007, but it will include structural improvements based on flaws discovered during the construction of the first two.

USCGC Bertholf (WMSL-750) – The first-in-class NSC is named for Commodore Ellsworth Price Bertholf, USRCS, USCG, the fourth Commandant of the United States Coast Guard. The ship was built by Northrop Grumman Ship Systems in Pascagoula, Mississippi under contract from ICGS and was completed in early 2008.

Meryl Chertoff, wife of U.S. Department of Homeland Security Secretary Michael Chertoff, was chosen by the Coast Guard as sponsor of the first NSC. The keel laying for Bertholf took place on March 29, 2005. The ship was launched on September 29, 2006 and she was christened on November 11, 2006.

The Coast Guard accepted delivery of the Bertholf on May 8, 2008 and was commissioned on August 4, 2008 at her homeport in Alameda, California.

USCGC Waesche (WMSL-751) – The second Legend-class NSC is named for Commandant Russell R. Waesche who served as Commandant of the Coast Guard and was the first Coast Guard Admiral to receive four stars. The ship is currently under construction at Northrop Grumman Ship Systems in Pascagoula, Miss.

Marilla Waesche Pivonka, granddaughter of the cutter's namesake, was chosen by the Coast Guard as sponsor of the second NSC. The keel laying for the Waesche took place on September 11, 2006 and she was christened on July 26, 2008.

USCGC Stratton (WMSL-752) - The third NSC is named for Captain Dorothy C. Stratton who was the director of the SPARS, the Coast Guard's Women's Reserve established during World War II. The ship began construction on July 21, 2008 in Pascagoula, Miss.

The Fast Response Cutter (FRC) was intended to replace the 110’ Island Class Cutters currently in service. It was removed from the IDS contract due to concerns over the feasibility of the ship design. The role will now be served by the Sentinel class cutter, which is based on an off-the-shelf design that has already proven itself.

The Offshore Patrol Cutter was intended to replace the 210' and 270' cutters currently in service. It was also removed from the IDS contract.

The 123' patrol boats were intended to serve as a bridging strategy until replacements for the 110' Island Class cutters could be designed and procured. They were created by lengthening eight existing 110' cutters to accommodate additional mission capabilities. The converted 123's were deemed unsafe for use in the projected operating environment in 2007 and are currently awaiting disposition. [1]. The USCG asked the contractors in August 2007 for a refund because these former 110 foot cutters will now have to be scrapped resulting in a reduction of capability instead of improvement.[2] In August 2011, the US government sued contractor Bollinger Shipyards over the failed modifications, alleging that the company made false statements about the hull strength that would result from its extensions to the patrol boats.[3]

The Medium Range Surveillance Maritime Patrol Aircraft (MRS) HC-144 Ocean Sentry is a new twin-turbo-prop airplane selected by the Coast Guard to replace the HU-25 Falcon Guardian, which has been in service since 1982.

Also known as the CN-235, the MRS aircraft are built by EADS CASA in Seville, Spain and are being transported upon completion to Mobile, Ala. for C4ISR pallet installation by Lockheed Martin. The first MRS aircraft was delivered to the Coast Guard in December 2006. Currently there are three aircraft undergoing testing in Mobile and an additional five are in various stages of construction.

The MRS aircraft, or "Ocean Sentry", will be the eyes of the Coast Guard fleet. It features a belly-mounted radar and is equipped with improved detection capability. It will be used in search and rescue missions, international patrol missions, law enforcement, and for illegal drug interdictions.

The Multi-Mission Cutter Helicopter (MCH) MH-65C is the upgraded model of the HH-65 Dolphin helicopter, which has been used by the Coast Guard since the 1980s. The new model (HH-65C model) features a more powerful engine, allowing the helicopter to fly faster, twice as far, and with twice the payload as their predecessor, the HH-65B model.

The reengining, which began in 2004, was originally scheduled to take place during the conversion to a multi-mission cutter helicopter, equipped with airborne use of force, but was accelerated under the Deepwater program following multiple in-flight loss of power events.

The upgrade program was completed in Fall 2007.

The development of the ship-launched Unmanned Aerial Vehicle is currently halted.[4]

All logistics support was intended to be provided through ICGS. With the exception of one year of support for C4 systems, this has been cancelled.

In 2004, the RAND Corporation released a report that questioned the ability of the Deepwater program to handle both the traditional duties of the USCG and the additional missions it has undertaken under DHS and recommended doubling the number of cutters and increasing airpower by 50%.[5]

Because of the scale of the building program exceeded anything done by the USCG before, Deepwater is unique in that the primary contractors were tasked with making design and procurement decisions on behalf of the Federal government. This did not achieve its intended result - assets that were designed to meet mission needs.

Because of performance problems, Deepwater has been the source of congressional budget battles over its funding. For fiscal year 2006, President George W. Bush requested funding of over $900 million, but the House of Representatives approved only $500 million. In September 2005, the full Congress did approve $900 million, just short of the President's original request.

In August 2006, the inspector general in the Homeland Security Department said that the department's oversight of the program was hampered by funding limitations and lack of experience with this type of program.[6]

Michael DeKort, a former lead systems engineer at Lockheed Martin for Deepwater, was dissatisfied and concerned with Lockheed Martin's conduct, in particular that of Lockheed executive Fred Moosally. After a series of failed attempts to draw needed attention to a growing problem within the project, DeKort made news headlines for taking a bold approach into corporate whistleblowing by utilizing YouTube.[8][9][10] After over a year of investigations, some conducted by congress, the Department of Homeland Security Inspector General's office and various members of the press, it appears DeKort's allegations have all been proven to be accurate.[citation needed] Recently[when?] news stories have surfaced demonstrating his warning, that significant C4ISR problems will continue on all future ship assets, like the National Security Cutters, appears to be true. A DOJ investigation which began in the fall of 2007 is ongoing. In May 2008 the Coast Guard was asked to put aside its $96 million refund request from ICGS so the DoJ and DHS IG could pursue the case themselves. In the summer of 2008 several reports on the Deepwater program—specifically the state of the 123 refund and the NSCs were submitted to congress by the GAO. Relative to the 123s the GAO compiled a list of costs the Coast Guard has incurred as a result of the eight lost patrol boats. These costs add up to well beyond the $96 million refund the Coast Guard requested. Their figures approached $150 million and did not include the residual value of the eight 123s or the $1.3 million for the eight rejected SRPs (Short Range Prosecutors). In another report the GAO acknowledged that the DoJ investigation now included an investigation into the NSC problems as well as the problems associated with 123s.[citation needed]

On May 29, 2009, The DHS IG released a report on the claims and amounts recovered.[11] Mr. DeKort responded to this report with a list of additional issues the IG neglected and suggested that the same issues may occur with the NSC.[12]

"The following summary is provided by the Congressional Research Service, which is a nonpartisan government entity that serves Congress and is run by the Library of Congress. The summary is taken from the official website THOMAS. 7/31/2007—Passed House amended. Integrated Deepwater Program Reform Act - Prohibits the Secretary of the department in which the Coast Guard is operating from using a private sector entity as a lead systems integrator for future Integrated Deepwater Systems Program (Program) procurements. Allows completion of existing delivery and task orders. Allows the Secretary to obtain assistance from federal agencies and, by grant, contract, or cooperative agreement, from private sector entities. Directs the Secretary, subject to exception, to use full and open competition for certain Deepwater Program acquisitions. Imposes other Program requirements, including certain required contract terms, development of a life cycle cost estimate, and assignment of a separate contract officers."

If passed, this law will complete the termination of IDS.