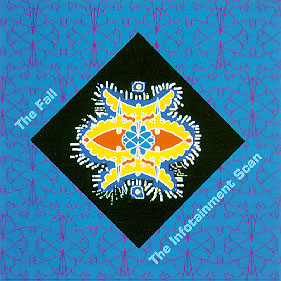 "The Infotainment Scan" is an album by The Fall, released in 1993 on Permanent Records in the UK and by in the US. It was considered at the time of its release as the band's most accessible album, and came when the band were experiencing unprecedented recognition in the media. It entered the UK album charts at number 9.

The album features covers of the disco track "Lost in Music" and of Steve Bent's "I'm Going to Spain", an obscure song which Bent performed on the British talent show "" in 1974; the track was subsequently included on a compilation entitled "The World's Worst Record" (1978) put together by disc jockey [http://blog.wfmu.org/freeform/2005/09/mp3_download_di.html] . The CD edition of "The Infotainment Scan" also includes "Why Are People Grudgeful?", the only track to be released as a single. It is based on two reggae songs: People Grudgeful by Joe Gibbs and People Funny Boy by [http://www.visi.com/fall/discog/data/single31.html] .

Of the original compositions on "The Infotainment Scan", "Glam-Racket" drew much attention for its alleged criticism of band Suede, with the lyric "you are entrenched in suede". At the time, Suede were regarded as a 'nouveau ' band. "The League of Bald-Headed Men", meanwhile &mdash; identified variously as a "jokey " and a "diatribe against " &mdash; appears to borrow its riff from 's "", despite claims by Fall front man that he had never heard the band's music [http://www.visi.com/fall/gigography/93sep00.html] . A remix of "...Bald-Headed Men", retitled "League Moon Monkey Mix", is also included on the CD edition.

track is exclusive to the CD edition

"The Infortainment Scan" was reissued by Artful in 1999 with the same tracklisting as the original CD editions. It was remastered and expanded to a 2CD set by in 2006 in slightly amended artwork. The first disc followed the original CD album programme and the second ran as follows:

Tracks 1-4 were the group's 16th session with tracks 5-8 having also been recorded for the , this time for 's evening programme on Radio 1. Tracks 9-12 are slightly alternate mixes from the album incarnations ("The Re-Mixer" being a new version of "The Mixer" from ""). The remaining tracks were all previously unreleased studio outtakes. Persistent rumour had it that The Fall had created as many as 17 different mixes of "Lost In Music"; the numbers given to the previously unissued versions on this edition strongly suggest that this was true.