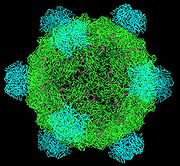 The phi X 174 (or ΦX174) bacteriophage was the first DNA-based genome to be sequenced. This work was completed by Fred Sanger and his team in 1977.[1] In 1962, Walter Fiers had already demonstrated the physical, covalently closed circularity of phi X 174 DNA.[2]

In 2003, it was reported that the whole genome of ΦX174 had been assembled synthetically from scratch.[3] ΦX174 has also been successfully assembled in vitro[4]

This bacteriophage has a [+] circular single-stranded DNA genome of 5386 nucleotides encoding 11 proteins. Of these 11 genes, only 8 are essential to viral morphogenesis. The GC-content is 44% and 95% of nucleotides belong to coding genes.

Infection begins when H protein (or the DNA Pilot Protein) pilots the viral genome through the bacterial membrane of E.coli bacteria (Jazwinski et al. 1975) most likely via a predicted N-terminal transmembrane domain helix (Tusnady and Simon, 2001). However, it has become apparent that H protein is a multifunctional protein (Cherwa, Young and Fane, 2011). This is the only viral capsid protein of ΦX174 to lack a crystal structure for a couple of reasons. It has low aromatic content and high glycine content, making the protein structure very flexible and in addition, individual hydrogen atoms (the R group for glycines) are difficult to detect in protein crystallography. Additionally, H protein induces lysis of the bacterial host at high concentrations as the predicted N-terminal transmembrane helix easily pokes holes through the bacterial wall. By bioinformatics, this protein contains four predicted coiled-coil domains which has a significant homology to known transcription factors. Additionally, it was determined by Ruboyianes et al. (2009) that de novo H protein was required for optimal synthesis of other viral proteins. Interestingly, mutations in H protein that prevent viral incorporation, can be overcome when excess amounts of Protein B, the internal scaffolding protein, are supplied.

The DNA is ejected through a hydrophilic channel at the 5-fold vertex (McKenna et al. 1992). It is understood that H protein resides in this area but experimental evidence has not verified its exact location. Once inside the host bacterium, replication of the [+] ssDNA genome proceeds via a rolling circle mechanism. As D protein is the most abundant gene transcript, it is the most protein in the viral procaspid. Similarly, gene transcripts for F, J, and G are more abundant than for H as the stoichiometry for these structures proteins is 5:5:5:1.

Phi X is regularly used as a positive control in DNA sequencing due to its relatively small genome size in comparison to other organisms and the extensive work that has been done on it.