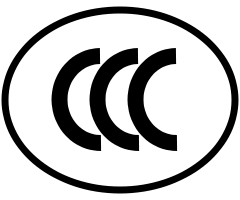 The China Compulsory Certificate mark, commonly known as CCC Mark, is a compulsory safety mark for many products sold on the Chinese market. It became effective on May 1, 2002. It is the result of the integration of China's two old compulsory inspection systems, namely "CCIB" (Safety Mark, introduced in 1989 and required for products in 47 product categories) and "CCEE" (also known as "Great Wall" Mark, for electrical commodities in 7 product categories), into a single procedure.

The CCC mark is required for both domestically manufactured products and products imported into China, such as:

The CCC mark is administered by the CNCA (Certification and Accreditation Administration). The China Quality Certification Centre (CQC) is designated by CNCA to process CCC mark applications and defines the products that need CCC.

On 27 April 2009, China announced 13 categories of products, so called "IT security products" should conform CCC (China Compulsory Certificate) implement regulation and it apply from, only a few day ahead, 1 May 2009. In view of security measure of China, there would be highly possible that China request disclosure of source code of program run on these products. The disclosure of source code is the big concern among countries U.S., Japan, EU and South Korea, and asking China to take back and opposing the implementation plan to come. The certification agent shall be limited to the organization or entity within China, but this restriction also arise other concerns that source code and secret of product know-how leaked to private sectors. In respond to such concern, China altered Compulsory Certificate implement from apply to all these type of product import into China to apply to only government procurement products and postponed implementation date to 1 May 2010.[1][2][3] China has also commented that the number of product categories is not expanded to more than 13.

The timeline of the opposition acts against to be settled policy of foreign IT security products procurement into Chinese government operations by other countries.