The town is located just outside Düsseldorf near Düsseldorf International Airport and Messe Düsseldorf. Further neighbour cities are Neuss, Krefeld, Duisburg, Kaarst and Willich. The total area of 36 square kilometres is divided into:

Division of the town

Various companies have settled their branch offices in several industrial parks. Above all, IMAV-Hydraulik GmbH has its headquarters in „Breite Straße“ and Epson, Ernst-Rademacher GmbH, Nedap, ATHLON, BOBST GROUP and Kyocera Mita have settled in Office Park Mollsfeld. This enlarged area is called "Mollsfeld North". In the neighbourhood, there are also many industrial parks mostly used for logistics because of the highway. The industrial park „Fritz-Wendt-Straße“ in Strümp was developed because of the grinding technology company Wendt GmbH. „In der Loh“ business park in Lank hosts small and middle class companies like Abit AG or KUPP GmbH and features modern architecture in „Robert-Bosch-Straße“. 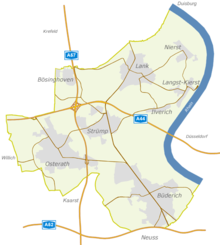