Mare Tranquillitatis (Latin for Sea of Tranquility) is a lunar mare that sits within the Tranquillitatis basin on the Moon. The mare material within the basin consists of basalt formed in the intermediate to young age group of the Upper Imbrian epoch. The surrounding mountains are thought to be of the Lower Imbrian epoch, but the actual basin is probably Pre-Nectarian. The basin has irregular margins and lacks a defined multiple-ringed structure. The irregular topography in and near this basin results from the intersection of the Tranquillitatis, Nectaris, Crisium, Fecunditatis, and Serenitatis basins with two throughgoing rings of the Procellarum basin. Palus Somni, on the northeastern rim of the mare, is filled with the basalt that spilled over from Tranquillitatis.

This Mare has a slight bluish tint relative to the rest of the moon and stands out quite well when color is processed and extracted from multiple photographs. The color is likely due to higher metal content in the basaltic soil or rocks.[3]

In 1965, the Ranger 8 spacecraft crashed in Mare Tranquillitatis, after successfully transmitting 7,137 photographs of the Moon in the final 23 minutes of its mission.

This mare was also the landing site for first manned landing on the Moon. After making a smooth touchdown in the Apollo 11 Lunar Module named Eagle, astronaut Neil Armstrong told flight controllers on Earth, "Houston, Tranquility Base here. The Eagle has landed." The landing area at 0.8° N, 23.5° E has been designated Statio Tranquillitatis after Armstrong's name for it, and three small craters to the north of the base have been named Aldrin, Collins, and Armstrong in honor of the Apollo 11 crew.

Along the periphery of the mare are several bay-shaped features that have been given names: Sinus Amoris, Sinus Asperitatis, Sinus Concordiae, and Sinus Honoris.[4] 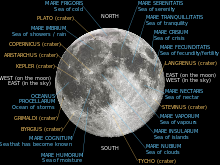