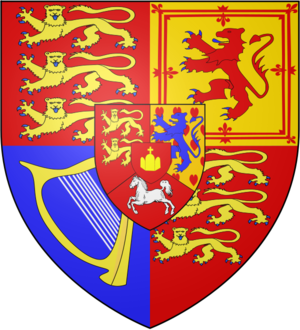 The Electorate of Hanover (or, more formally, the Electorate of Brunswick-Lüneburg; _de. Kurfürstentum Hannover, Kurfürstentum Braunschweig-Lüneburg) became the ninth Electorate of the in 1692, when the Holy Roman Emperor, Leopold I, elevated Duke Ernest Augustus to the rank of Elector of the Empire as a reward for aid given in the . There were protests against the addition of a new Elector, and the elevation did not become official until the approval of the Imperial Diet in 1708.

In 1714, George Louis became king of Great Britain, whereby Hanover and Britain were joined in . The influence of the electors grew in Germany as well, as they inherited the formerly Swedish territories of Bremen and Verden in 1719, and as part of the of 1803, the Electorate received the .

In 1803, the electorate was occupied by French and Prussian troops after the , and following the in 1807, its territories together with territories ceded from Prussia was created into the , ruled by Napoleon's brother . However, the government of George III did not recognize the French annexation, being at war continuously with France through the entire period, and Hanoverian ministers continued to operate out of London. The Hanoverian government maintained its own separate diplomatic service, which maintained links to countries such as Austria and Prussia, with whom the United Kingdom itself was technically at war. The Hanoverian army was dissolved, but many of the officers and soldiers went to England, where they formed the . The Legion was the only German army to fight continually during the whole Napoleonic wars against the French.

French control lasted until October 1813 when the territory was overrun by Russian troops, and the Battle of the Nations at Leipzig later the same month spelled the definitive end to the Napoleonic client state, as well as the entire , after which the was restored as rulers and elevated from their roles as s of a former vassal of the , to monarchs of an independent kingdom, at the in 1814.

In 1692, the Holy Roman Emperor, Leopold I, elevated Ernest Augustus, son of Duke George, to the rank of Elector of the Empire as a reward for aid given in the . There were protests against the addition of a new Elector, and the elevation did not become official until the approval of the Imperial Diet in 1708, in the person of Ernest Augustus' son, George Louis. Though the Elector's titles were properly "Duke of Brunswick-Lüneburg" and "Elector of the Holy Roman Empire", he is commonly referred to as the "Elector of Hanover" after his residence.

The Electorate was legally bound to be indivisible: it could add to its territory, but not alienate territory or be split up among several heirs; and its succession was to follow male primogeniture. The territory assigned to the Electorate included the Brunswick-Lüneburg duchies of Calenberg, Grubenhagen, and Celle (even though at the time Celle was ruled by Ernest Augustus' older brother) and the counties of Diepholz and Hoya.