Growing up as a kid who dreamed of playing for Paraguay, Valdez and his family lived in poverty in the deprived district of San Joaquin, one of the poorest parts of Paraguay.[3] He confessed that he had an "excellent childhood" who had the joy of being from a loving family. Not owning a football, Valdez's skills were developed by playing with an orange or a pair of socks as his family, which included six siblings, could not afford to buy a ball for him.[3] Before leaving home, Valdez was to convince his mother to let him play football. His father took his side and Valdez eventually managed to go to Asuncion to pursue his dream.[4]

Aged 15, Valdez left his home and family to move to Ypané when he was signed to the junior divisions of Club Atlético Tembetary and eventually made his first-team debut in 2000.[5] The small club, then based in the Paraguayan second division, were not able to pay him a salary large enough to earn a living and his family were not able to provide funding for him. Valdez confessed the difficulty he faced when leaving his impoverished family and his home to begin playing with the club, for two years he would spend some nights sleeping under the wooden planks and in a stairwell under the grandstand at the club's stadium using a makeshift bed of blankets and cardboard which laid in the stairwell beneath the stand, he never told his parents who were poor land workers.[6][7]

Valdez had no home while playing in Tembetary's youth team's while living 250 kilometres away from his family. He worked night shifts in a sawmill to pay for food and drink, developing a penchant for cane liquor Valdez revealed that he was once "almost an alcoholic". He was a 16 year old exposed to danger and the Paraguayan climate, boiling hot summers and freezing cold winters, which Valdez described as "hell", "frightening and horrible" "But if you have nothing, what can they steal? I had nothing to give".[3]

Jürgen Born, chairman of the board or management of Werder Bremen worked for Deutsche Bank in Latin America stated that he saw a "madman who never stopped running" remembering youth games in Ypané. He bought Valdez a ticket to Germany and got on the phone to Werder Bremen.[6] Klaus Allofs, a scout from Werder Bremen spotted Nelson's silky finishing, Valdez flew over to Germany for a trial. Valdez failed at first, not impressing in his trial but the club president's wife, who was a fellow Paraguayan, asked for Valdez to be given another trial. He scored four times in his first trial match and was offered the chance to join Werder Bremen's youth team.[3][8][9][10]

Haedo Valdez joined Werder Bremen in December 2001. He did not know a word of German and knew just enough Spanish.[11] He spent the first two seasons in the Regionalliga with the Werder Bremen reserve team, but became more regular. Valdez scored 15 times in 30 appearances for Bremen's U-18 side.

The then first-team manager Thomas Schaaf called Valdez up to the squad where he debuted in a 1-0 loss to Energie Cottbus where he was substituted onto the field on 82 minutes for Christian Schulz on 22 February 2003.[12]

On 23 August 2003 Valdez celebrated his first goal of the 2003–04 Fußball-Bundesliga season against Schalke 04 when he scored after three minutes of coming on to the field. On 30 October 2003 it was reported that Valdez had signed a professional contract with the club's first-team until 2007.[13]

On 29 May 2004 Bremen faced Alemannia Aachen in the 2003–04 DFB-Pokal cup final where Valdez had been substituted onto the field for Ivan Klasnić on 87 minutes of the 3-2 win as Bremen were crowned champions.

Bremen finished on top of the Bundesliga table with 74 points and qualified for the 2004–05 UEFA Champions League. Valdez had scored 5 goals in 21 league appearances.

On 14 September 2004, Valdez debuted in the 2004–05 UEFA Champions League in a game against Inter Milan. On 7 December 2004, within minutes of coming on as a substitute, Valdez scored two goals against Spanish side Valencia to help his team to a 2–0 away win in an ill-tempered match and enable it to progress beyond the group stages of the Champions League at Valencia's expense.[14] Bremen faced Lyon in the round of 16 Champions League knockout stage, Valdez played in both games where his side lost 3–0 in Bremen and 7–2 in Lyon.[15][16] During his years in the first-team Valdez did not often receive the opportunity to play in the starting eleven, his opportunities were limited when competing for a place up-front with Miroslav Klose and Ivan Klasnić, the Bundesliga's top striking duo at the time.

In May 2006 Borussia Dortmund were impressed enough by Valdez to offer him a four-year contract, where he was able to start on a regular basis but struggled to score, with one goal in 29 outings in 2006–07. His lack of prolificacy was always compensated for by energy and creativity.

During the 2009–10 Bundesliga season Valdez would make 28 appearances and score five goals. By then, Paraguayan striker Lucas Barrios would join Valdez at the club. Nelson's last goal for Borussia Dortmund came in a 1–1 draw against Hoffenheim on 18 April 2010 when Valdez had been substituted on the pitch for Mohamed Zidan on 29 minutes and scored a second half goal on 57 minutes to put Dortmund in front.[17] Dortmund finished in fifth position of the Bundesliga table and qualified for the 2010–11 Europa League.[18] In June 2010, Premier League club Sunderland had lined up a bid for Haedo Valdez after his impressive performance against Italy at the 2010 FIFA World Cup. Borussia Dortmund had indicated that they wanted €10million or around £8m for Valdez but Sunderland's boss Steve Bruce had been hoping to sign him for less.[19][20]

Haedo Valdéz during his presentation at Hérucles CF.

In August 2010 Valdez signed a three-year contract with Hércules CF after admitting that he had received offers to play in Russia. Valdez became the most expensive signing in the history of Hércules having been transferred for €3.5million.[21] His debut resulted in a brace against FC Barcelona on 11 September in a surprising 2–0 victory at the Camp Nou.[22] Valdez scored his second double for Hércules in a 3–1 win against Levante on 29 November.[23] He would then score in a 4–1 against Atletico Madrid on 11 January 2011.[24] In January, when Valdez had scored six times in 11 appearances, it was reported that Real Madrid had considered signing him when Madrid striker Gonzalo Higuain was ruled out for the season following back surgery, however, a transfer was never established.[25][26][27] He received a red card on 61 minutes in his second last game of the 2010–11 season in a 3–2 loss against Racing Santander on 8 May.[28][29] He would finish the season having scored 8 goals in 25 league appearances as Hércules would finish 19th in La Liga and face relegation. Having been partnered up front with David Trezeguet, the two had scored 20 goals between them for the 2010–11 season.[30] During his performance at the 2011 Copa América in July, it was reported in Spanish newspapers that a Wigan Athletic party had traveled to Spain to make a €4 million offer for the striker, which was rejected as they were told to put up more money to meet the €5 million release clause in Valdez's contract.[31][32] Sunderland then propsed an offer of €4.2 million to sign Valdez, who by then had received a lucrative offer from Holland's PSV Eindhoven and also offers from Russia, Portugal and England.[33] On 1 August it was reported by ABC de Sevilla that Real Betis had already began negotiations with Hércules for Valdez as a replacement for Achille Emana who was reported to being transferred to Saudi Arabia's Al-Hilal, where Hércules had asked for €4 million for the striker, Valdez was also reportedly tempted by Al-Hilal.[34][35]

In August 2011, Valdez signed a four-year contract with Russian Premier League side Rubin Kazan.[36] His debut came in a 3–1 away loss to FC Krasnodar on 10 September where he received a yellow card on 27 minutes.[37] He made his first appearance in the 2011–12 UEFA Europa League on 15 September in a 3–0 victory over Ireland's Shamrock Rovers.[38] Valdéz scored his first goal in the Europa League in a 2–2 draw against PAOK on 29 September 2011.[39]

Valdez was selected for Paraguay's Under-20 squad for the 2003 FIFA U-20 World Cup held in the United Arab Emirates as Paraguay had finished third at the 2003 South American Youth Championship. Valdez featured in all three group-stage fixtures scoring in the last game in a 2–0 win against Germany as Paraguay finished second in their group. Valdez then featured in Paraguay's round of 16 clash against Spain where which Paraguay were beaten 1–0.[40][41][42][43] 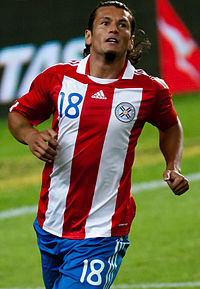 Haedo Valdéz in a friendly match against Australia in Sydney on 9 October, 2010.

Having not been selected for Paraguay's Under-23 squad for the 2004 Summer Olympics, Valdez was part of the Paraguay 22 man squad at the 2004 Copa America in Peru. Playing in two of Paraguay's three group stage games as Paraguay finished in first place and were drawn against Uruguay in the quarter-finals. Valdez played in the quarter-final which Paraguay lost 3–1.[44]

Valdez scored his first goal for Paraguay in a game against El Salvador on 17 August 2005.[45]

During the 2006 FIFA World cup qualification campaign Valdez scored after 64 minutes in a 1–0 away win against Venezuela on 8 October 2005.[46] Paraguay finished fourth with 28 points as Valdez was selected for the final 23 man squad for the tournament where he was handed the number 18 shirt. At the 2006 FIFA World Cup, Valdez started in Paraguay's opening Group B clash against England which they lost 1–0.[47] After a solid performance from Valdez against Sweden in the second game Paraguay would lose 1–0 after 89 minutes and be eliminated from the tournament.[48] Valdez would play 66 minutes of Paraguay's final group stage fixture against Trinidad and Tobago, which they won 2–0, as he was replaced by Nelson Cuevas.[49]

Valdez was not included in Paraguay's squad for the 2007 Copa America in Venezuela, however, a few months later he took part in the 2010 FIFA World Cup qualifiers, he opened his goal scoring account in round two of the qualifiers scoring in a 1–0 win against Uruguay on 7 October 2007.[50] Paraguay were undefeated until round six where they had lost 4–2 against Bolivia in La Paz, Valdez scored his third goal of the qualifiers.[51] On 9 September 2009, in Asunción in round 16 of the qualifiers Haedo Valdez scored after 27 minutes of the first half to give Paraguay a 1–0 lead against Argentina, who were coached by Diego Maradona at the time, Paraguay won the game 1–0 and qualified for the 2010 FIFA World Cup.[52][53][54][55] Paraguay finished the campaign in third spot, behind Brazil and Chile, with 33 points as Valdez had scored five times in 17 appearances.

Valdez was selected in the 23-man squad for the 2010 FIFA World Cup. Paraguay were grouped with Slovakia, New Zealand and Italy, Valdez participated in all three matches as Paraguay finished top of the group with five points.[56][57][58] In the round of 16 Paraguay faced Japan where they drew 0–0 after extra-time, Valdez replaced Édgar Benítez after 60 minutes and played until extra-time had finished. The match was decided by a Penalty shootout, Valdez converted his, and Paraguay's fourth, spot kick and eventually won the shootout 5–3.[59] Paraguay faced Spain in the quarter-finals, during the first-half Valdez scored past Iker Casillas but had the goal ruled out as offside. Paraguay eventually lost the game 1–0.[60]

Haedo Valdez provides his birthplace, San Joaquin, with £8,285 per month and buys 1,500 children presents every Christmas. San Joaquin depends on Valdez as he provides the people with a better chance than he ever had.[3]

Valdez once, gun in hand, chased off thieves stealing his car and ran into his blazing home to save his dog.[6]