The Alhambra Unified School District is a school district based in Alhambra, California, United States.[1]

AUSD serves the City of Alhambra, most of the City of Monterey Park, and parts of the Cities of San Gabriel and Rosemead. District headquarters is located at 1515 W. Mission Road, Alhambra, California 91803. 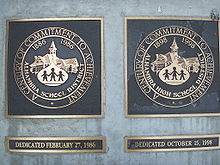 In January 1886, the citizens of Alhambra withdrew from the San Gabriel School District and formed the Alhambra School District. During the spring semester, classes were held in the second floor of a livery stable on a corner of what today would be 300 South Chapel Avenue. 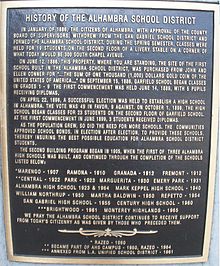 The Alhambra School District purchased the land for its first school, Garfield School, from John and Ellen Conner for the price of “…one thousand (1,000) dollars gold coin…” on June 12, 1886. Garfield School began classes on September 15, 1886 in grades 1-9, and the first commencement was held June 14, 1889, with five pupils receiving diplomas.

Later, on April 22, 1898, a successful election was held to establish a high school in Alhambra. The election, which passed with a vote of 49 to 9, established the Alhambra High School District. The high school began classes for twenty-three students on the second floor of Garfield School on October 1, 1898. At the first commencement in June 1899, three students received diplomas.

The need for schools grew with the population, and the communities approved bonds to provide these schools. The second building program began in 1905 with the completion of the first of three Alhambra High Schools, and continued through the completion of Monterey Highlands School in 1965.

Students in grades Kindergarten through 8 are required to wear school uniforms [1].

The policy, which applied to the Alhambra School District, began in September 1996. The policy remained after the consolidation of ASD and AHSD, with the policy applying to all Kindergarten through 8th grade students.

About every one to three years, the school board gives out surveys for the parents to fill out, asking for the opinion of whether or not the students should wear uniform. The school district asks for the students to wear uniform, but has made the exception of letting students include any color jacket or socks. Uniform colors include navy blue, maroon, and white. 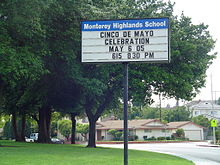 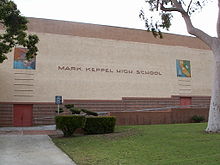