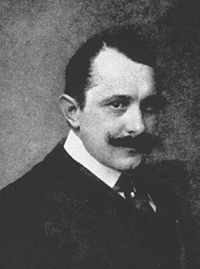 Born William Clyde Fitch at Elmira, New York, he wrote over 60 plays, 36 of them original, which varied from social comedies and farces to melodrama and historical dramas.

As the only child to live to adulthood, his father, Captain William G. Fitch, a graduate of West Point and a Union officer in the Civil War, encouraged him to become an architect or to engage in a career of business, but his mother, Alice Clark, in whose eyes he could do no wrong, always believed in his talent. She would hire the architectural firm of Hunt & Hunt to design the sarcophagus set inside an open Tuscan temple for his final resting place at Woodlawn Cemetery in Bronx, New York. Fitch graduated from Amherst College in 1886, where he was a member of Chi Psi Fraternity.

He was the first American playwright to publish his plays. His first work of note was Beau Brummell (1890), a major work set in the English Regency which became a showcase for actor Richard Mansfield (1857–1907), who would play the title role for the rest of his life. His 1892 play Masked Ball (an adaption from Alexandre Bisson's Le Veglione) would be the first time that Charles Frohman put Maude Adams opposite John Drew Jr. which led to many future successes. In 1900, Captain Jinks of the Horse Marines, made a star of Ethel Barrymore.

He is remembered particularly for his works such as Nathan Hale (1898), The Climbers (1901), The Girl with the Green Eyes (which ran 108 performances at the Savoy Theatre in 1902, and starred Robert Drouet as John Austin), The Woman In the Case, (which also starred Drouet and ran 89 performances at the Herald Square Theatre in 1905),The Truth (1907) and The City (1909). His works were popular on both sides of the Atlantic. His play based on the heroine of John Greenleaf Whittier's poem Barbara Frietchie met with mixed reviews in 1899 because of the romance he added to the tale, but it would be successfully revived a number of times. In 1896 he wrote the lyrics to a popular song Love Makes The World Go 'Round, with the arrangement by William Furst. 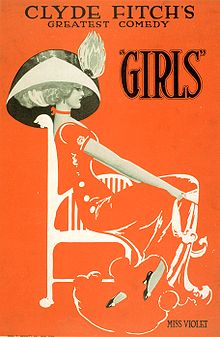 His career spanned a brief two decades, but he earned upwards of $250,000 from his plays at a time when a dollar a day was the working wage. He directed a few of his plays and was closely involved in the production of them all. Working with Edith Wharton he wrote and directed the stage adaptation of The House of Mirth in 1906. He was the first American playwright to be taken seriously and at one time managed to have five plays running simultaneously on Broadway.

A generous host with an engaging personality, he was renowned as a raconteur. His invitations to "Quiet Corner" in Greenwich, Connecticut were sought after. A close friend of Elsie de Wolfe, she would help him find many of the furnishings for this house as well as others. At one point she said "he knows more about women, than most women know about themselves." A dandy by his early teens, he knew that in school he was seen as a sissy, but he said, "I would rather be misunderstood than lose my independence." In fact, he seems to have been understood all too well; correspondence of the time points to a likely relationship, however brief, with Oscar Wilde.

He suffered from attacks of appendicitis but refused his American doctor's recommendation of surgery, instead trusting the specialists in Europe who assured him that they could effect a cure over time without surgery.

The gravesite of Clyde Fitch

While staying at the Hotel de la Haute Mère de Dieu at Châlons-sur-Marne, France, he suffered what would be a fatal attack. He underwent surgery by a local doctor, rather than travel to Paris, and died from blood poisoning. His body was returned from France where it was entombed for a time in the Swan Callendar Mausoleum at Woodlawn Cemetery which belonged to a friend.

In 1910, the body was removed and taken to New Jersey for cremation and the ashes were returned to the Swan Callendar Mausoleum until the Hunt & Hunt monument was finished. His ashes were then placed in the sarcophagus where his parents' ashes would later join his own. An additional memorial exists in the form of the Clyde Fitch Memorial Room in Converse Hall at Amherst.

Since his death, some of Fitch's works have been revisited in repertoire theater and more recently have been made into motion pictures and television dramas. The Archives and Special Collections at Amherst College holds a collection of his papers.