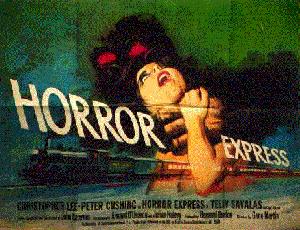 Professor Alexander Saxton () is an anthropologist returning home to Europe via the bringing with him a 'fossil' in a crate. The 'fossil' is the frozen remains of a primitive humanoid creature, which Saxton is sure is the missing link in the evolutionary chain. Also on board is Dr. Wells (), another Englishman and a colleague of Saxton's.

Mysterious deaths occur even before the train sets out. A known thief is found dead on the platform after having looked into the crate, bleeding from his eyes, which have turned blank and white. A slightly unbalanced monk (a Rasputin-esque figure, played by the actor Alberto de Mendoza), who acts as a spiritual advisor to the Count and Countess waiting to board the train, claims that the crate is evil.

Saxton is eager to keep his find a secret from everyone, especially Dr. Wells, but Wells pays the baggage man to look into the crate. When he does, he is also killed by the glowing red gaze of the creature, which escapes the confines of its crate. The murders continue while the humanoid fossil haunts the moving train, the victims found with blank white eyes, and an autopsy leads Wells and his assistant to hypothesize that the brains of the victims are being drained of memories and knowledge. When the fossil is gunned down by Inspector Mirov, an authority in charge of the train, the threat seems to have been vanquished. However, Saxton and Wells discover images embedded in liquid inside the eye of the dead fossil, images that reveal a prehistoric Earth, as well as a view of the Earth from outer space. They deduce that the real threat is a formless alien creature that was simply inhabiting the body of the fossil, and that it has now transferred itself to the Inspector. The monk senses the evil presence inside of the Inspector and pledges allegiance to it, considering it .

When news of the murders on the train is wired to n authorities, the train is stopped and an intimidating named Captain Kazan () boards with a small group of his men. Mirov is discovered to be the creature and is shot down, but not before the alien presence transfers itself to the monk. The passengers all retreat to the caboose, while the monk murders Kazan and his men by draining them of their brains.

Saxton rescues the Countess from the creature, but it resurrects all of its victims as white-eyed zombies. The zombies chase Saxton and the Countess back to the caboose, where the others are waiting. As they desperately work to detach the caboose from the rest of the train, Russia sends a telegraph to the next station ahead that they are to send the train over a cliff. The operators follow this order, thinking that they may be at war. Just as the surviving passengers manage to separate themselves from the rest of the train, it goes crashing over the cliff into a fiery explosion below. The caboose rolls to a safe stop precariously near the edge, where the survivors watch the fire consume the train and the unnatural inhabitants within it.

"Horror Express" was a Spanish production directed by Eugenio Martin. It was filmed in in the years 1971-1972, a low budget film ($300,000) with the luxury of having three familiar genre actors in the lead: , , and . The film was co-produced by American filmwriter/producer Bernard Gordon, who had collaborated with Martin on the 1972 film "Pancho Villa" (which also featured Savalas in the title role). The filmmakers used both the miniature train and interior train set from "Pancho Villa" for "Horror Express". The challenge was that they only had one set to be used as an interior train car. All of the scenes for each train car had to be shot at once, then the set would be rebuilt as the next car. [Bernard Gordon interview at [http://www.cinescape.com/0/editorial.asp?aff_id=0&this_cat=Books&action=page&jump=back&obj_id=21380&cat_id=270456&sub_id=270563] ; last accessed , ]

Securing Lee and Cushing was a coup for producer Gordon, since it lent a certain atmosphere reminiscent of Hammer Films, many of which starred both of the actors. However, when Cushing arrived in to begin work on the picture, he was still distraught over the recent death of his beloved wife, and announced to Gordon that he could not do the movie. With Gordon desperate over the idea of losing one of his important stars, Lee stepped in and put Cushing at ease simply by talking to him about some of their previous work together. Cushing changed his mind and stayed on. [Bernard Gordon interview at [http://www.cinescape.com/0/editorial.asp?aff_id=0&this_cat=Books&action=page&jump=back&obj_id=21380&cat_id=270456&sub_id=270563] ; last accessed , ]

The over-the-top performance of cemented the film's reputation as a cult favorite. Savalas performed the role using grand gestures and a speaking voice similar to his characterization of , despite the fact that his character was supposed to be a Russian Cossack.

"Horror Express" was filmed mostly without sound, with effects and voices dubbed into the film later. , and all provided their own voices for the English market. [Liner notes, Horror Express DVD release by , written by Mark Walkow.]

The film's scriptwriters were Arnaud d'Usseau andJulian Zimet (credited as Julian Halevy), who had also written the script for the supernatural biker film "Psychomania" together. Their script for "Horror Express" features a number of familiar horror/sci-fi elements for the story. The most obvious reference would be the short story "", which had previously been the inspiration for the 1951 film "". "" also dealt with an alien foe who could assume the form of human beings, threatening an isolated group of people and interested in building a spacecraft so that it could escape the Earth. The scenes featuring Cushing performing autopsies on bodies also seem to deliberately reference his appearances as Dr. Frankenstein in the Hammer films series.

But the script for "Horror Express" added several ideas to the formula, most notably the idea that the alien creature could be a supernaturally evil presence. The monk character performs an experiment at the beginning of the film where he tries to draw the sign of the cross on the fossil's crate, and it will not appear. The monk considers the alien to be , and at one point offers himself as a sacrifice to the creature directly. The creature scoffs at him and tells the religious man that there is nothing of importance in his brain. Later in the film, after the alien has indeed entered the body of the monk, it is confronted by Saxton and buys time by tempting him, offering to teach him about the history of the Earth and how to end disease and famine. At one point, while the monk is still human, he confronts Captain Kazan with a crucifix. Kazan respectfully kisses it, revealing a religious conviction despite his potential for violence. In contrast, the character consistently reveals a scientific nature that defies religion and superstition. He believes he has found the missing link, and one of the characters tells him that the theory of evolution is immoral. Saxton states bitterly that it is fact, and there is no morality in facts.

Also notable is that "Horror Express" is quite gory for its time. The victims of the monster bleed profusely from their eyes, which turn shocking white, and there is a gruesome autopsy scene where Dr. Wells cuts off the top of the corpse's head with a hack saw.

According to director Eugenio Martin, his native country of was where the film fared worst, both critically and in terms of box office revenue. [Liner notes, Horror Express DVD release by , written by Mark Walkow.] The film was received more positively in other markets, and became a cult favorite when it ran quite extensively on television in the 1970s and 1980s.

Dr. Wells: "Are you telling me that an ape that lived two million years ago got out of that crate, killed the baggage man and put him in there then locked everything up neat and tidy and got away?"

Inspector Mirov: The two of you together. That's fine. But what if one of you is the monster?

*
* [http://www.archive.org/details/Horror_Express "Horror Express"] as a free download at the . (Flash or MPEG4)