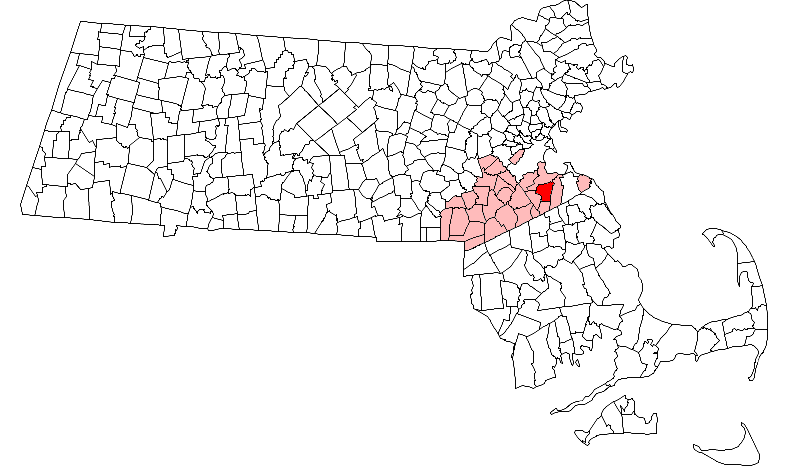 Braintree was founded on land first colonized in 1625 by Captain Wollaston, and initially named "". Under the rule of Thomas Morton it was renamed "Merry Mount." In 1640 the area was resettled and incorporated as the town of Braintree, named after the English town of Braintree, on land which was further split into the settlements of Randolph, Holbrook, the city of Quincy, and part of Milton. Braintree is the birthplace to Presidents and , as well as statesman and General , the "Father of ".

Braintree is also the site of the infamous murders as well as the retirement home of the co-inventor of the (See ).

In January 2008 Braintree converted from a form of government to a .

Braintree is situated in the , which has excellent rail, air, and highway facilities. State Route 128 and Interstate 495 divide the region into inner and outer zones, which are connected by numerous "spokes" providing direct access to the airport, port, and intermodal facilities of .

Principal highways in Braintree are (which runs concurrently with U.S. 1) and Route 3, as well as 37, and 53. Entering Braintree from the north, I-93, Route 1, and Route 3 all run concurrently as the from ; in Braintree they diverge, with Route 3 heading south toward as the Pilgrims Highway, and I-93 and Route 1 heading west toward Route 128.

Commuter rail service to South Station, Boston, is available on the Middleboro & Plymouth lines from the Rail Station located on Union Street. Rail service on the Greenbush line started up in late 2007. The Red Line is also accessible at the same location.

Braintree is a member of the () which provides fixed route service to Quincy Adams, Quincy Center, Braintree, and Ashmont stations. The also provides THE RIDE, a paratransit service for the elderly and disabled.

The majority of Braintree residents use for air transportation, and the , a Reliever (RL) facility, is also easily accessible with two asphalt runways 4,001'x 150' and 4,007'x 150'. Instrument approaches available: Non-precision.

There are three high schools in Braintree: , a public school; , a private school; and Archbishop Williams, a Roman Catholic private school.