Foster was raised in Manchester in a working-class family and was intrigued by design and engineering from a young age. His years observing Mancunian architecture subsequently influenced his works, and was inspired to pursue a career in Architecture after a treasurer clerk noticed his tendency to sketch and venture around Manchester to view buildings while he worked at Manchester Town Hall.[2]

Foster returned to the United Kingdom in 1963 and set up his own practice, Team 4 before changing its name to Foster + Partners. His breakthrough building was arguably the Willis Building in Ipswich in 1975 and has since gone on to design landmark structures such as the new Wembley Stadium and 30 St Mary Axe. His buildings has made him one of Britain's most prolific architects of his generation.[3] In 2009 Foster was awarded the Prince of Asturias Award in the Arts category.

Foster was born to Robert Foster and Lilian Smith[4] in 1935 in Reddish (now part of Greater Manchester), Stockport. Foster himself stated he has no recollection of Reddish[5] as within months of being born, his parents rented a terraced house, 4 Crescent Grove in Levenshulme for fourteen-shillings a week.[6]

Foster's parents were diligent, hard workers - so diligent that Foster, an only child without siblings, felt their heavy workload restricted his relationship with his parents and would often be looked after by neighbours or other family members.[7] He attended Burnage Grammar School (now Burnage High School) in Burnage. Foster stated he always felt 'different' at school and was bullied.[8] He often retired into the world of books and was quiet and awkward in his early years often making faux pas.[9] 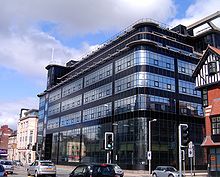 Foster would often venture around Manchester observing buildings. The art deco Daily Express Building in Manchester was a building that intrigued Foster. Foster later incorporated black glass into his breakthrough building, the Willis Building in Ipswich

Manchester was 'one of the workshops of the world'[8] during his childhood, as Foster later put it and was 'the embodiment of a great city'.[10] His father, Robert, worked at Metropolitan Vickers at the Trafford Park plant - both helped fuel his interest in engineering and design.[8] As a youngster, he was fascinated with engineering marvels and the process of designing which ultimately spurred his wish to pursue a career in designing buildings.[11] Specific interests included aircraft, a keen hobby he maintains to this day[11]; and trains, an interest generated by viewing passing trains on the railway track outside his terrace home in Manchester during his childhood.[11]

During his O-Levels in his later school years, Foster's father convinced him to take the entrance to get on the Manchester Town Hall's trainee scheme.[12] He passed in 1951 and landed a job as an office junior in the Manchester Treasurer Department.[12] Foster's parents were pleased, but their son was disappointed. Bored of office work, Foster would often venture out into Manchester to observe buildings during lunch breaks and sketch designs while at his desk. This trait alerted a town hall clerk, who Foster refers to by the name of Mr Cobb. Cobb's son was studying architecture and after discussions with the clerk Foster soon considered a career in architecture.[13] He worked on a permanent basis in the Manchester City Treasurer's office, before completing the compulsory National Service in 1953. Foster chose to do Service in the Royal Air Force, a choice inspired by his passion for aircraft.[14]

Foster returned to Manchester, and did not wish to return to work at the town hall as his parents wanted him to and remained unsure of the path to follow.[15] With 7 O-levels, he applied for a job at a duplicating office machine company and when asked by the interviewer why he applied, Foster replied: 'mainly because it offered the prospect of a company car, and a £1,000 salary.'[16] Foster was searching for a world away from his working-class roots, and much to the alienation of his parents.[17]

After failing to gain a job, Foster was led to John Beardstow, a local architect in Manchester. After a successful interview, he gained a job as an assistant to a contract manager at the practice.[18] Foster was unsure how to become an architect, and if it was even possible coming from a working class background where money for tuition was slim. Nevertheless, he queried colleagues at the architecture practice for advice on how to become an architect. Advised to create a portfolio to hand to an architecture school, he took various drawings, such as perspective and shop drawings from Beardstow's practice as inspiration.[19] Foster intended to submit this portfolio to an architectural school in the hope of gaining, however inadvertently Beardstow was so impressed with the drawings he promoted the young Foster to the drawing department of the practice.[20] However after trying to convince Foster to stay and learn his trade as an architect at Beardstow's, Foster declined and wanted to pursue a place at an architecture school.

After he was discharged, in 1956 Foster won a place at the University of Manchester School of Architecture and City Planning. Foster failed to get a grant to help fund his studies, and being from a working-class background money was at a minimum. He took up a number of part time jobs to fund his studies in Architecture.[21] His jobs in his teenage years included being an ice-cream salesman, night-club bouncer[21] and working night shifts at the local bakery to make crumpets.[8] He combined these with self-tuition via visits to the local library in Levenshulme.[22] Foster took a keen interest in the works of Frank Lloyd Wright, Ludwig Mies van der Rohe, Le Corbusier and Oscar Niemeyer and graduated from Manchester in 1961.[1]

Foster won the Henry Fellowship to the Yale School of Architecture, where he met future business partner Richard Rogers and earned his Master's degree. He then travelled in America for a year, returning to the UK in 1963 where he set up an architectural practice as Team 4 with Rogers and the sisters Georgie and Wendy Cheesman. Georgie (later Wolton) was the only one of the team that had passed her RIBA exams allowing them to set up in practice on their own. Team 4 quickly earned a reputation for high-tech industrial design.

The Willis Faber and Dumas Headquarters in Ipswich was one of Foster's earliest commissions after founding Foster Associates.

After Team 4 went their separate ways, in 1967 Foster and Wendy Cheesman founded Foster Associates, which later became Foster and Partners. 1968 saw the beginning of a long period of collaboration with American architect Richard Buckminster Fuller, which continued until Fuller's death in 1983, on several projects that became catalysts in the development of an environmentally sensitive approach to design – including the Samuel Beckett Theatre project.

Foster + Partners' breakthrough building in the UK was the Willis Faber & Dumas headquarters in Ipswich, from 1974. The client was a family firm insurance company which wanted to restore a sense of community to the workplace. Foster created open-plan office floors long before open-plan became the norm. In a town not over-endowed with public facilities, the roof gardens, 25m swimming pool and gymnasium greatly enhanced the quality of life of the company's 1200 employees.[23] The building is wrapped in a full-height glass facade which moulds itself to the medieval street plan and contributes real drama, subtly shifting from opaque, reflective black to a glowing backlit transparency as the sun sets. This black glass design was inspired by the Daily Express Building in Manchester which featured black vitrolite, a work Foster admired in his youth. The building is now Grade One listed. 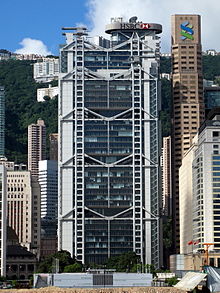 The HSBC Building in Hong Kong. Designed by Foster in the 1980s

Foster soon gained a reputation as an architect specialising in the design of office buildings. In the 1980s he designed the HSBC Main Building in Hong Kong for the banking firm, HSBC. The building is marked by a high level of light transparency for its inhabitants, as all 3500 workers have a view out to Victoria Peak or a view over the Hong Kong bay and Chinese mainland from the north side.[24] 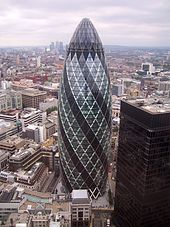 View of 30 St Mary Axe. The building serves as the London headquarters for Swiss Re and is informally known as 'The Gherkin'.

Foster was assigned with a brief to create a new development on the former site of the Baltic Exchange in the 1990s. The Exchange was bombed beyond repair by the IRA and so a new building was considered. Foster + Partners first submitted a plan for a 385m skyscraper which would be called the London Millenium Tower, but the skyscraper's height was seen as excessive and out of touch with London's skyline.[25]

The Millenium Tower proposal was scraped and instead Foster proposed 30 St Mary Axe, which gained the nickname of "the gherkin" due to its design which alluded to its shape. Foster worked with its engineering collaborators to integrate complex computer systems with the most basic physical laws, such as convection when designing St Mary Axe. Green, sustainable energy ideas inclue the complex facade which lets in air for passive cooling and then vents it as it warms and rises.

Foster's earlier designs reflected a sophisticated, machine-influenced high-tech vision. His style has since evolved into a more sharp-edged modernity. In 2004, Foster designed the tallest bridge in the world, the Millau Viaduct in southern France, with the Millau Mayor Jacques Godfrain stating; "The architect, Norman Foster, gave us a model of art."[26]

In January 2007, The Sunday Times reported that Foster had called in Catalyst, a corporate finance house, to find buyers for Foster + Partners. Foster does not intend to retire, but sell his 80–90% holding in the company valued at £300M to £500M.[27]

In 2007, he worked with Philippe Starck and Sir Richard Branson of the Virgin Group for the Virgin Galactic plans.[28]

Foster was knighted in 1990 and appointed to the Order of Merit in 1997. In 1999, he was created a life peer, as Baron Foster of Thames Bank, of Reddish in the County of Greater Manchester.[29] As a resident of Switzerland, in 2010 he stepped down from his seat in the House of Lords in order to maintain his non-domiciled status, and so be able to avoid paying UK residents' taxes on income earned abroad.[30][31] Foster was also criticised by some in the Architecture world for not advocating the importance of high standards of architecture and planning in the House of Lords.[32] Foster last gave a speech to the Lords in 2003 before his resignation in 2010.[32]

He is the second British architect to win the Stirling Prize twice: the first for the American Air Museum at the Imperial War Museum Duxford in 1998, and the second for 30 St Mary Axe in 2004. In consideration of his whole portfolio, Foster was awarded the Pritzker Architecture Prize in 1999. He is also a Fellow of the Chartered Society of Designers and winner of the Minerva Medal, the Society's highest award. Foster is a Senior Fellow of the Design Futures Council.[33]

Foster married business partner Wendy Cheesman. She died from cancer in 1989, leaving him with four sons. He was divorced from Sabiha Rumani Malik in 1998 and is currently married to Elena Ochoa Foster, Lady Foster of Thames Bank.

A qualified pilot, Foster flies his own private jet and helicopter between his home above the London offices of Foster + Partners, as well to his homes in France and Switzerland.[27] In 2007, Foster bought a Swiss 1720s chateau from the German industrialist Charles Grohe, which became his home from late 2008.[36]

Foster has established an extremely prolific career in the span of four decades. The following are some of his major constructions:

Proposed or under construction 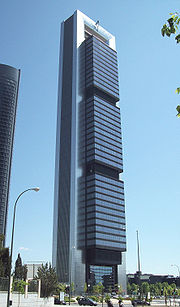 The restored Reichstag in Berlin, housing the German parliament. The dome is part of Foster's redesign. 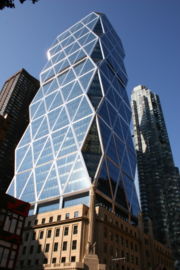 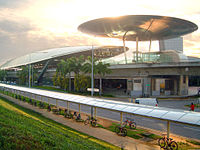 The Expo MRT Station, part of the Mass Rapid Transit system in Singapore.