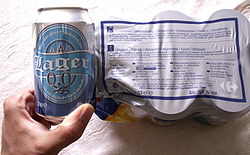 In the United States, beverages containing less than 0.5% alcohol by volume (ABV) were legally called non-alcoholic, according to the now-defunct Volstead Act. Because of its very low alcohol content, non-alcoholic beer may be legally sold to minors in many American states.

In the United Kingdom, the following definitions apply by law (correct as of May 2007):[1]

In some parts of the European Union, beer must contain no more than 0.5% ABV if it is labelled "alcohol-free".

Light beer is beer that is reduced in alcohol content or in calories, compared to regular beer. The spelling "lite beer" is also commonly used.

Light beers may be chosen by beer drinkers who wish to manage their alcohol consumption or their calorie intake. However, these beers are sometimes criticized[3] for being less flavorful than full-strength beers, being "watered down" (whether in perception or in fact), and thus advertising campaigns for light beers generally advertise their retention of flavor.

"Light beer" can refer to beer that has significantly less alcohol than regular beer.

In Australia, regular beers have approximately 5% ABV; reduced-alcohol beers have 2.2%–3.2%.

In Scotland, beers were taxed according to strength in the 19th century. The weakest category, 60/-, was generally under 3.5% ABV.

In the United States, most reduced-alcohol beers, including Bud Light, Coors Light, and Miller Lite have 4.2% ABV.[3] This is a 16% reduction in alcohol compared to beer that has 5% ABV. Also, some establishments are permitted to sell only reduced-alcohol beer. For example, in Colorado, Kansas, Minnesota, Oklahoma, and Utah, beer that is sold in supermarkets and convenience stores must have no more than 3.2% alcohol by weight (4% ABV). This low-alcohol beer is called "low-point beer" or "three-two beer". Minnesota has a full-service alcohol license that is available to retailers. It permits the sale of regular beer, but licenses permitting the sale of 3.2% beers are easier to obtain.

"Light beer" can also refer to beer that has a reduced calorie content, compared to regular beer. Reducing the calorie content of beer is done by a large reduction of its carbohydrate content and a small reduction of its alcohol content.[3] Most beer of this kind is not significantly less intoxicating than regular beer, although Budweiser Select is labelled as having under 3.2% ABW, possibly to permit its sale in localities that have 3.2% beer laws. Beer Advocate suggests it actually contains 2.5% ABV, or 50% of the alcohol in a normal American-style non-light lager.

The calorie content of beers varies over a wide range.[5]

Low-point beer, which is often called "three-two beer" or "3 point 2 brew", is beer that contains 3.2% alcohol by weight (equivalent to 4% ABV).

The term "low-point beer" is unique to the United States, where some states limit the sale of beer, but beers of this type are also available in countries (such as Sweden and Finland) that tax or otherwise regulate beer according to its alcohol content. In Sweden, beer containing up to 3.5% ABV (called Folköl or "Peoples Beer") may be legally sold in any convenience store to people over 18 years of age, whereas stronger beer may only be sold in state-run liquor stores to people older than 20. In addition, businesses selling food for on-premises consumption do not need an alcohol license to serve 3.5% beer. Virtually all major Swedish brewers, and several international ones, in addition to their full-strength beer, make 3.5% folköl versions as well.

The states of Colorado, Kansas, Minnesota, Oklahoma, and Utah permit general establishments such as supermarket chains and convenience stores to sell only low-point beer.[6][7][8][9][10] In these states, all alcoholic beverages containing more than 3.2% alcohol by weight (ABW) must be sold from state-licensed liquor stores. Oklahoma additionally requires that any beverage containing more than 3.2% ABW must be sold at normal room temperature.[11]

Missouri also has a legal classification for low-point beer, which it calls "nonintoxicating beer".[12] Unlike Colorado, Kansas, Minnesota, Oklahoma, and Utah, however, Missouri does not limit supermarket chains and convenience stores to selling only low-point beer. Instead, Missouri's alcohol laws permit grocery stores, drug stores, gas stations, and even "general merchandise stores" (a term that Missouri law does not define) to sell any alcoholic beverage;[13] consequently, 3.2% beer is rarely sold in Missouri.

Originally, "near beer" was a term for malt beverages containing little or no alcohol (less than 0.5% ABV), which were mass-marketed during Prohibition in the United States. Near beer could not legally be labeled as "beer" and was officially classified as a "cereal beverage".[14] The public, however, almost universally called it "near beer".

Today, the term "near beer" has been revived to refer to modern non-alcoholic beer.[citation needed]

The most popular "near beer" was Bevo, brewed by the Anheuser-Busch company. The Pabst company brewed "Pablo", Miller brewed "Vivo", and Schlitz brewed "Famo". Many local and regional breweries stayed in business by marketing their own near-beers. By 1921 production of near beer had reached over 300 million US gallons (1 billion L) a year (36 L/s).

A popular illegal practice was to add alcohol to near beer. The resulting beverage was known as spiked beer or needle beer,[15] so called because a needle was used to inject alcohol through the cork of the bottle or keg.

Food critic and writer Waverley Root described the common American near beer as "such a wishy-washy, thin, ill-tasting, discouraging sort of slop that it might have been dreamed up by a Puritan Machiavelli with the intent of disgusting drinkers with genuine beer forever."[16]

Small beer[17] (also small ale) is a beer that contains very little alcohol. Sometimes unfiltered and porridge-like, it was a favoured drink in medieval Europe and colonial North America, where George Washington had a recipe for it involving bran and molasses.[18] It was sometimes had with breakfast, as attested in Benjamin Franklin's autobiography. In those times of lower public sanitation, water-transmitted diseases were a significant cause of death. Because alcohol is toxic to most water-borne pathogens, and because the process of brewing any beer from malt involves boiling the water, which also kills germs, drinking small beer instead of water was one way to escape infection. Small beer was also produced in households for consumption by children and servants. It was not unknown for workers engaging in heavy physical labour (including sailors) to consume more than ten pints or five litres of small beer during a working day to maintain their hydration levels. This was usually provided free as part of their working conditions, it being recognised that maintaining hydration was essential for optimum performance. It was a naval tradition until the 1960s to provide a pint of rum diluted several times over with water (down to the ~5% ABV level) in several divided rations over the course of the day, although the amount of rum was steadily decreased until it was phased out, leading to the quote of Harold Nicolson, famously misattributed to Winston Churchill, "...naval tradition is nothing but rum, sodomy, and the lash".[19]

Small beer, or small ale, can also refer to a beer made from the "second runnings" of a very strong beer mash (e.g., scotch ale). These beers can be as strong as a mild ale, depending on the strength of the original mash. This was done as an economy measure in household brewing in England up to the 18th century and is still done by some homebrewers and microbrewers, such as the Anchor Brewing Company [compare second wine].

Metaphorically, small beer means a trifle, a thing of little importance. The term is also used derisively for commercially produced beer which is considered to be too weak.

Few commercial breweries bother to make small beer today. However, one of these rarities is produced by the Anchor Brewing Company of San Francisco, California. It is made from the "second runnings" of the malt from the brewer's Old Foghorn Barleywine Style Ale.

Legal restrictions around the world may be found here.

Beers that are labeled "non-alcoholic" still contain a very small amount of alcohol. Thus, some US states require the purchaser to be 21 years old. Exceptions include:

However, because it is NOT considered as an alcoholic beverage (the threshold is 1.15% ABV) by the definition, there is no legal drinking age (of 18) imposed in countries like New Zealand.

Besides Benjamin Franklin's autobiography, small beer turns up in the writings of:

Adam Smith, in a discussion of how trade works, refers to small beer in The Wealth of Nations as an example of a commonly consumed commodity.

Thomas Thetcher's tombstone at Winchester Cathedral features a poem that blames his death on drinking small beer while hot.

Graham Greene used the phrase “small beer” in a metaphorical sense in The Honorary Consul.

Ken Follett, in his novel The Pillars of the Earth, makes numerous references to small beer.

Islam prohibits the consumption of alcoholic beverages.[22] The Hanafi school of Islam, which accounts for around 40% of Muslims, does not prohibit alcohol but does prohibit intoxication, based on a different interpretation of the operative word khamr. The other three schools prohibit both alcohol and intoxication.

One of the two great scholars of the Hanafi school, Abu Yusuf, drank a mildly alcoholic malt beverage, which was at the time used to provide energy.[23] However, there is disagreement among scholars of Islam about the consumption of non-alcoholic beer.[24]

Possibly because of this disagreement, alcohol-free (0% ABV) beers, (e.g. Holsten, Barbican and Moussy) are often available in stores and restaurants that cater to an Islamic customer base. They are also popular in countries that enforce alcohol prohibition, such as Saudi Arabia, Kuwait and Iran. They are often available with added flavors (apple, strawberry, and peach).

How low-alcohol beer is made

Low-alcohol beer starts out as regular alcoholic beer, which is then cooked in order to evaporate the alcohol. This is possible because alcohol has a lower boiling point than water, making it easier to boil off. As opposed to water, which boils at 100 °C (212 °F), alcohol will boil at 78.6 °C (173.5 °F). Most modern breweries also utilize vacuum evaporation to preserve flavor and speed up the boiling process. In essence, the beer is placed under a light vacuum to facilitate the alcohol molecules going into gaseous phase. If a sufficient vacuum is applied, it may not even be necessary to cook the beer.

An alternative process called reverse osmosis does not require heating. The beer is passed through a filter with pores small enough that only alcohol and water (and a few volatile acids) can pass through. The alcohol is distilled out of the alcohol-water mix using conventional distillation methods. After adding the water and remaining acids back into the syrupy mixture of sugars and flavor compounds left on the other side of the filter, the process is then complete.[25]