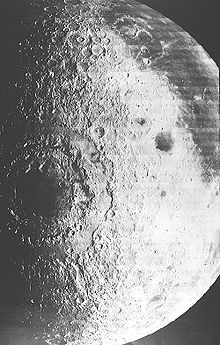 1967 photograph of Mare Orientale made by NASA's Lunar Orbiter 4 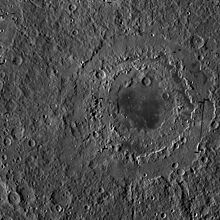 Mare Orientale ("eastern sea" in Italian) is one of the most striking large scale lunar features, resembling a target ring bull's-eye. Located on the extreme western edge of the lunar nearside, this impact basin is difficult to see from an Earthbound perspective.

Material from this basin was not sampled by the Apollo program so the basin's precise age is not known. However, it may be the freshest impact basin on the Moon and is believed to be slightly younger than the Imbrium Basin, which formed about 3.85 billion years ago. The surrounding basin material is of the Lower Imbrian epoch with the mare material being of the Upper Imbrian epoch.

The mare is about 900 kilometres (560 mi) across and was formed by the impact of an asteroid-sized object. Unlike most other basins on the Moon, Orientale is relatively unflooded by mare basalts, exposing much of the basin structure to view; the central portion of Mare Orientale is covered by a thin layer of mare basalt probably less than 1 kilometer deep, much less than in other nearside mare basins. The collision caused ripples in the lunar crust, resulting in the three concentric circular features. The innermost rings of this vast, multi-ringed crater are the inner and outer Montes Rook, and the outermost ring are the Montes Cordillera, 930 km in diameter. Basin ejecta begins just outside the Montes Cordillera and extends up to 500 kilometers beyond the base of the mountains. This ejecta has a rough, hummocky texture and contains linear patterns that point back at the center of Orientale.

Located at the antipode of Mare Orientale is Mare Marginis.

This feature is believed to have first been given its modern name by the German astronomer Julius Franz in his 1906 book Der Mond (DE: The Moon). However, in his book On the Moon, Patrick Moore later claimed to have discovered and named this same feature in 1946. In an earlier edition (1976) of the book (then titled Guide to the Moon) Moore describes how it was he and H P Wilkins who discovered it. Moore does, however, credit Franz as discoverer in his 2009 Yearbook of Astronomy (p.133-135).

However, in their paper that appeared in the Journal of the British Astronomical Association (vol.117, no 3, 129-135) Ewan Whitaker and Richard Baum tell the story of the 'discovery' and naming of the Mare, and it is credited to Julius Franz.

During the 1960s, rectified images of this area by Gerard Kuiper at the Lunar and Planetary Laboratory gave rise to the notion of this being an impact crater.

At the time this formation was named it was located on what by convention was considered the eastern side of the Moon, hence the latin name for "Eastern Sea". In 1961, however, the International Astronomical Union adopted the astronautic convention for East and West on the Moon and this limb became the western edge.