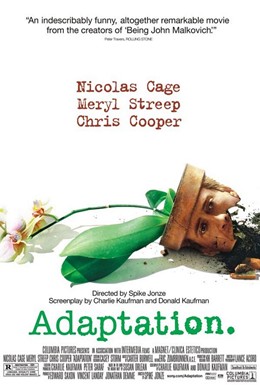 "Adaptation." is a 2002 film directed by and written by . The film is based on Susan Orlean's book "" through self-referential events. "Adaptation." stars (as both Charlie and ), as well as , Chris Cooper, , , , and . The film tells the story of Charlie Kaufman's difficult struggle to adapt "The Orchid Thief" into a film. In addition Orlean romances with while Charlie enlists the help of his obnoxious twin brother Donald.

The film had been in development as far back as 1994. brought the project to with Kaufman writing the script. Kaufman went through and did not know what to think of "The Orchid Thief". In turn Kaufman wrote a script about his experience adapting "The Orchid Thief" into a screenplay. was at one point set for the role of Charlie Kaufman while was approached to portray Laroche. Jonze signed to direct and filming finished in June 2001. "Adaptation." received positive reviews and critical acclaim, as well as outstanding success at the , and .

:"Note: The following is told in chronological order."
and his wife run a successful nursery, but tragedy strikes and Laroche's wife, mother and uncle are involved in a car accident. Laroche's mother and uncle die, but his wife goes into a coma, divorcing Laroche once she gains consciousness. comes one month later, destroying Laroche's home and everything he owns. Meanwhile, local Seminoles hire Laroche due to his vast knowledge of flowers and poaching. However, the Seminoles only use the extract of the Ghost Orchid for drug use, and not for tribal ceremonials as Laroche thought.

Laroche is caught at the , ensuing into a trial and catching the interest of "New Yorker" journalist . Laroche and Susan become great friends, with Susan writing "". Laroche and Susan then become romantically involved, while Susan is still married, albeit unhappily, in New York. "The Orchid Thief" is then optioned by .

During the filming of "", is hired to write the . At the same time Charlie is going through and his obnoxious twin brother Donald moves into his house. Donald decides to become a screenwriter like Charlie, and visits the seminars of . Charlie wants to adapt the script into a faithful adaptation of "The Orchid Thief", hoping to impress Susan. However, he realizes that there is no involved and finds it impossible to turn the book into a film, going through a serious case of .

Meanwhile, Donald's for a sells for over one million dollars, while Charlie accidentally starts writing his script with . Already well over his deadline with Columbia Pictures, Charlie (from ) visits Susan in New York for advice on the screenplay. In New York Charlie finds that he is not courageous enough to meet Susan, leaving without consulting with her. Charlie visits a McKee seminar in New York, gaining advice from McKee, and bringing Donald to assist with the story structure. Donald suggests having sex, a and drugs for the climax. Charlie and Donald follow Susan to Florida where she meets Laroche. The film indeed ends with Susan and Laroche taking the Ghost Orchid drug, having sex, a car chase involving Susan and Charlie and with Donald being shot and killed, and Laroche getting eaten alive by an alligator. His writer's block broken, Charlie finally summons up the courage to tell his former girlfriend, Amelia, that he is in love with her. He finishes his script, with in mind to portray him in the film.

* as
** : A screenwriter going through and who is hired to write a script for "". He is afraid to kiss his girlfriend Amelia. Charlie has failed romances with Susan, Valerie and Alice the Waitress.
** : Charlie's obnoxious brother. Donald has failed at various get-rich-quick-schemes in the past and decides to become a screenwriter like Charlie. Donald visits the seminars of Robert McKee and writes a titled "The Thr3e". Marty sells the script to a studio and Donald is set to be a millionaire before he's killed in the climax.
* as : A journalist and author from "". She is fascinated by Laroche's trial in and intends to write a piece about it. She becomes romantically involved with Laroche.
*Chris Cooper as : An eccentric poacher working for the local Seminole Indian tribe. Laroche considers himself "the smartest man I know" and has a unique knowledge of , fossils and . He lost his front teeth after a car accident wherein his mother and uncle were killed. His ex-wife divorced him after waking up from a coma. Laroche also ran a successful porn website before being killed by an alligator.
* as Amelia Kavan: A violinist and Charlie's girlfriend. She leaves him for a man named David after her unsuccessful relationship with Charlie. In the end, Charlie finally summons the courage to tell her that he loves her. She admits that she loves him, too.
* as : A creative writing instructor who is widely known for his popular "Story Seminar". McKee is heavily against voice-overs and considers "Casablanca" (1942) to be the finest screenplay ever written.
* as Valerie Thomas: A from whom Charlie is attracted to. Valerie is the one who hires Charlie to write the script.
* as Marty Bowen: Charlie's obnoxious agent who personally suggest Charlie to get help from Donald when writing "The Orchid Thief".
* as Caroline Cunningham: A and Donald's girlfriend.
* as Alice: A waitress at the local where Charlie often dines. Charlie tries to ask her out on a date.

was originally set for the double role of Charlie and Donald Kaufman, while "Variety" was convinced Donald was a real person.

and have small roles as Seminole Indians. , , and have uncredited cameos as themselves in scenes where Charlie Kaufman is on the set of "". filmed a cameo before it was deleted from the final cut of the film. [cite news | author = Stax | url = http://movies.ign.com/articles/317/317169p1.html | title = John Cusack Talks Shop | publisher = | date = | accessdate = 2008-04-05] More cameos include Doug Jones as for a small scene when Susan fantasizes about the history of , as Ranger Tony and as a "New Yorker" journalist.

had at one point announced a late 2001 theatrical release date.