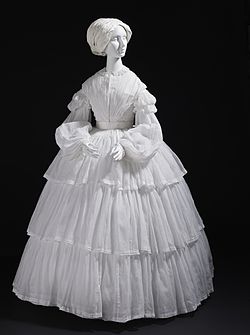 Muslin (English pronunciation: /ˈmʌslɨn/, or less frequently: (/ˈmjuːslɨn/) is a loosely-woven cotton fabric originated in Bangladesh, which was introduced to Europe from the Middle East in the 17th century. It became very popular at the end of the 18th century in France. Muslin is most typically an unbleached or white cloth, produced from carded cotton yarn. It is often used to make sewing patterns, such as for clothing, curtains, or upholstery. Because air moves easily through muslin, muslin clothing is suitable for hot, dry climates.

Muslin clothes were traded by ancient Greeks from the Indian port town Machilipatnam, which was called Maisolos or Masalia in ancient times. Some believe that the name 'Muslin' originated from the name Maisolos.[1][2] Marco Polo, the famous traveller, visited the Kakatiya kingdom in which Machilipatnam was located and praised the muslins available there.[3] Another view was that the fabric was named after the city where Europeans first encountered it, Mosul, in what is now Iraq, but the fabric actually originated from Dhaka, what is now the capital of Bangladesh.[4][5] In the 9th century, an Arab merchant named Sulaiman makes note of the material's origin in Bengal (known as Ruhml in Arabic).[5]

In 1298 C.E. Marco Polo describes the cloth "Muslin" in his book The Travels. He said that it is made in Mosul, Iraq.[6]

The word muslin is also used colloquially. In the United Kingdom, many sheer cotton fabrics are called muslin, while in the United States, muslin sometimes refers to a firm cloth for everyday use, which in the UK and Australia is known as calico. 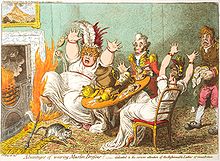 In Advantages of wearing Muslin Dresses! (1802), James Gillray caricatured a hazard of untreated muslin: its flammability. 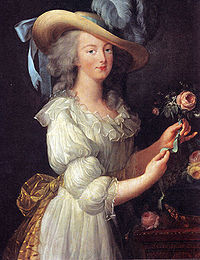 Marie Antoinette, in 1783, in her famous "muslin" portrait

When sewing clothing, a dressmaker may test the fit of a garment, using an inexpensive muslin fabric before cutting the intended expensive fabric, thereby avoiding potential costly mistakes. The muslin garment is often called a "muslin", and the process is called "making a muslin". With the availability of inexpensive synthetic fabrics, which closely resemble the hand (drape and feel) of expensive natural fabrics, a test or fitting garment made of synthetics may still be referred to as a muslin, because the word has become the generic term for a test or fitting garment.

Muslin is also often used as a backing or lining for quilts, and thus can often be found in wide widths in the quilting sections of fabric stores.

Muslin can be used as a filter:

(a) in a funnel when decanting fine wine or port to prevent sediment from entering the decanter;

(b) to separate out liquid from mush, e.g. to make apple juice - wash, chop, boil, mash, then filter by pouring the mush into a muslin bag suspended over a jug = keep the liquid, reject the solid;

(c) for cheese-making at home, when the milk has curdled to a gel, pour into a muslin bag and squash between two saucers (upside down under a brick) to squeeze out the liquid whey from the cheese curd - keep the solid, reject the liquid;

Muslin is the material for the traditional cloth used to wrap a Christmas pudding.

Muslin is used by Beekeepers to filter melted beeswax, making it clean and particle free for sale.

Muslin is often the cloth of choice for theater sets. It is used to mask the background of sets and to establish the mood or feel of different scenes. It receives paint well and, if treated properly, can be made translucent.

It also holds dyes very well. It is often used to create night time scenes because when it is dyed, it often gets a wavy look with the color varying slightly, such that it resembles a night sky. Muslin shrinks after it is painted, but it is widely used because it makes an excellent painting surface.

In video production as well, muslin can be used as a cheap greenscreen or bluescreen, either precolored or painted with latex paint (diluted with water). It is commonly used as a background for the chroma key technique.

Muslin is the most common backdrop material used by photographers for formal portrait backgrounds. These backdrops are usually painted, most often with an abstract mottled pattern.

In the early days of silent film-making and up until the late 1910s, movie studios did not have the elaborate lights needed to illuminate indoor sets, so most interior scenes were sets built outdoors with large pieces of muslin hanging overhead to diffuse the lighting.

Muslin gauze has also found a use in cerebrovascular neurosurgery. It is wrapped circumferentially around aneurysms or intracranial vessels at risk for bleeding.[7] The thought is that the gauze reinforces the artery and helps prevent rupture. It is often used for aneurysms that, due to their size or shape, cannot be microsurgically clipped or coiled.[8]