Holiday in the Sun (film)

Holiday in the Sun (film)

"Holiday in the Sun" is an American produced by and released in 2001 starring . It was directed by . 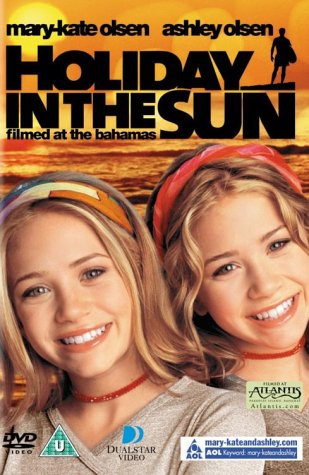 Madison (Mary-Kate) and Alex Stewart (Ashley) are twin sisters from who are whisked away to Atlantis Resort on , by their parents for winter break. Initially, the sisters are disappointed that they didn't get to go to with their friends, but overcome it by enjoying their newly-earned freedom in the form of their own suite, as well as the pristine beaches of the . Alex falls for "hottie" Jordan, a worker at the . She's not the only one with her eye on Jordan &ndash; the spoiled Brianna is also after him, and plays dirty to get her way. Madison, meanwhile, is being wooed by cute but brainless Scott, who in turn is being coached behind the scenes by Griffen, a childhood friend of Madison's with a not-so-subtle crush. The sisters' holiday of fun in the sun is interrupted when they cross paths with a man smuggling stolen artifacts. Though their parents are keeping a close eye on them, the sisters and Griffen must find a way to clear Jordan's name when their friend is wrongfully arrested for the . Together, they overcome everything and understand the true meaning of sisterhood.

* Swedish pop band Play appear in the film as themselves, performing in the club.
* The closing credits are accompanied by out-takes (bloopers) from the film, along with part of Play's video for "Us Against the World".
* The scene of Madison and Alex arriving at the and boarding the for their flight from the to the was actually filmed on location in the Bahamas. The falling was superimposed onto the picture in post-production.
*In another movie starring Mary-Kate and Ashley Olsen, "", there is a scene where they rush past a Chinese woman selling pirated DVDS. One of the DVD covers reads "Holiday in the Sun 2".
*The song Island In The Sun appears in this film.

* [http://mary-kateandashley.com/holiday_in_the_sun/index.php Holiday in the Sun]