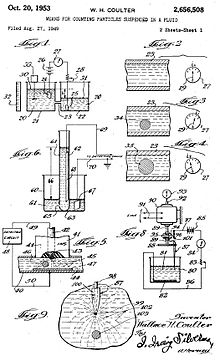 The term “Coulter Principle” refers to the use of an electric field for counting and sizing dilute suspensions of particles in conducting liquids. The phrase was coined when Wallace H. Coulter was awarded US Patent #2,656,508, Means for Counting Particles Suspended in a Fluid. The Coulter Principle is most commonly employed in a COULTER COUNTER®, which is an analytical instrument designed for a specific task such as counting cells. However, there are numerous other ways to implement the Coulter Principle. Several of these have been attempted, some with commercial success, and some purely for academic research. To date, the most commercially successful application of the Coulter Principle is in hematology, where it is used to obtain information about patients’ blood cells. While the Coulter Principle and Coulter Counters have appeared in many thousands of peer-reviewed research papers over the past 5 decades, most people remain unfamiliar with it unless they have personally encountered it in a laboratory environment. This Wikipedia page provides a primer on the Coulter Principle.

The Coulter Principle relies on the fact that particles moving in an electric field cause measurable disturbances in that field. The magnitudes of these disturbances are proportional to the size of the particles in the field. Coulter identified several requirements necessary for practical application of this phenomenon. First, the particles should be suspended in a conducting liquid. Second, the electrical field should be physically constricted so that the movement of particles in the field causes detectable changes in the current. Finally, the particles should be dilute enough so that only one at a time passes through the physical constriction, preventing an artifact known as coincidence.

While the Coulter Principle can be implemented in a variety of designs, there are two that have become the most commercially relevant. These include an aperture format and a flow cell format. The Figure above shows several other geometries that Coulter patented.

The aperture format is used in most commercial Coulter counters. In this set up, an orifice of defined size is created in a jewel disk using special manufacturing processes. The resulting aperture is then embedded in the wall of a glass tube. The product of this process is commonly referred to as an aperture tube. While in use, the aperture tube is placed in a liquid so that the jewel disk is completely submerged and the tube can fill with liquid. Electrodes are positioned both inside and outside the aperture tube, which allows current to flow through the aperture. A pump is used to create a vacuum at the top of the tube, which draws the liquid through the aperture. Samples to be analyzed are then slowly added to the conducting liquid surrounding the aperture tube. At the start of the experiment, the electric field is turned on and the pump begins to draw the dilute suspension through the aperture. The resulting data are collected by recording the electrical pulses generated as the particles traverse the aperture. While the basic physical set-up of the aperture format is consistent in every COULTER COUNTER®, the amount and quality of data varies greatly as a function of the signal processing circuitry implemented. For example, amplifiers with lower noise thresholds and greater dynamic range can increase the sensitivity of the system. Similarly, digital pulse height analyzers with variable bin widths provide much higher resolution data as opposed to analog analyzers with fixed bins. Further, combining a COULTER COUNTER® with a digital computer allows capture of many electrical pulse characteristics, while analog counters typically store a much more limited amount of information about each pulse.

The flow cell format is most commonly implemented in hematology instruments, and sometimes flow cytometers. In this format, electrodes are embedded at either end of a flow channel and the electric field is applied through the channel. This format has several advantages as opposed to the aperture format. This arrangement allows for continuous sample analysis whereas the aperture format is single-batch format. Further, the use of a flow cell lends itself to addition of a sheath flow, which keeps particles centered in the middle of the flow channel. This allows additional measurements to be performed simultaneously, such as probing the object with a laser. The major disadvantages of the flow cell format are that it is much more expensive to manufacture and is typically fixed to one channel width, whereas the aperture format offers a wide variety of aperture sizes.

Anomalous electrical pulses can be generated if the concentration of sample is so high that multiple particles enter the aperture simultaneously. This situation is known as coincidence. The problem occurs because there is no way to ensure that a single large pulse is the result of a single large particle or multiple small particles entering the aperture at once. In order to prevent this situation, samples must be fairly dilute.

The shape of the generated electrical pulse varies with the particle path through the aperture. Shoulders and other artifacts can occur because the electric field density varies across the diameter of the aperture. Thus, a particle’s path through the field will impact the shape of the electric pulse generated. This variance is a result of both the physical constriction of the electric field and also the fact that the liquid velocity varies as a function of radial location in the aperture. In the flow cell format, this effect is minimized since sheath flow ensures each particle travels an almost identical path through the flow cell. In the aperture format, signal processing algorithms can be used to correct for artifacts resulting from particle path.

Conductive particles are a common concern for individuals considering the Coulter Principle. While this topic raises interesting scientific questions, practically, it rarely effects the results of an experiment. This is because the conductivity difference between most conductive materials and ions in liquid (referred to as the discharge potential) is so great that most conductive materials act as insulators in a COULTER COUNTER®. The voltage necessary to breakdown this potential barrier is referred to as the breakdown voltage. For those highly conductive materials that present a problem, the voltage used during a Coulter experiment should be reduced below the breakdown potential (which can be determined empirically).

The Coulter Principle measures the volume of an object, since the disturbance in the electric field is proportional to the volume of electrolyte displaced from the aperture. This leads to some confusion amongst those who are used to optical measurements from microscopes or other systems that only view two dimensions and also show the boundaries of an object. The Coulter Principle, on the other hand measures three dimensions and the volume displaced by an object. It is most useful to think of sponges-even though a wet sponge may appear very large, it will displace significantly less liquid than a solid brick of the same dimensions.

The most successful and important application of the Coulter Principle is in the characterization of human blood cells. The technique has been used to diagnose a variety of diseases, and is the standard method for obtaining red blood cell counts (RBCs) and white blood cell counts (WBCs) as well as several other common parameters. When combined with other technologies such as fluorescence tagging and light scattering, the Coulter Principle can help produce a detailed profile of patients’ blood cells.

In addition to clinical blood cells (~6-10 micrometres, typically), the Coulter principle has established itself as the most reliable laboratory method for counting a wide variety of cells, ranging from bacteria (< 1 micrometre in size), fat cells (~400 micrometre), plant cell aggregates (~>1200 micrometre), and stem cell embryoid bodies (~900 micrometre). The technique has become so standardized that ASTM International (formerly American Society for Testing and Materials) has published a procedure on the topic: ASTMF2149-01(2007) Standard Test Method for Automated Analyses of Cells-the Electrical Sensing Zone Method of Enumerating and Sizing Single Cell Suspensions (http://www.astm.org/Standards/F2149.htm).

The Coulter Principle has proved useful to applications well beyond cellular studies. The fact that it individually measures particles, is independent of any optical properties, is extremely sensitive, and is very reproducible has appeal to a wide variety of fields. To illustrate, below are listed some of the ASTM Methods that have been written for the Coulter Principle (Sometimes referred to as “Electrical Sensing Zone”). Note the wide variety of materials that they encompass.

Additionally, one International Standard Organization (ISO) guideline document has been produced on the Coulter Principle

Need for Blood Testing due to Nuclear Threat

Wallace H Coulter developed the Coulter Principle in the mid 1940s (though a patent was not awarded until October 20, 1953). It is important to note that Coulter’s development of the Coulter Principle was around August 9, 1945, the day the United States dropped a nuclear bomb on Hiroshima. This event motivated Coulter to simplify and improve blood cell analysis so that large populations could be screened rapidly. Partial funding of the project came from a grant award from the Office of Naval Research. While other sources sometimes relate a story surrounding paint analysis, this is not supported by the historical facts or by people who lived and worked with Coulter over the years. Authoritative resources on the topic are available in Journal of Laboratory Automation, December 2003. The Coulter Principle: Foundation of An Industry and Cytometry volume 10, a DVD series produced by the Purdue University Cytometry Labs.

A COULTER COUNTER® played an important role in the development of the first ever cell sorter, and was involved in the early days of the development of flow cytometry. Even today, some flow cytometers utilize the Coulter Principle to provide highly accurate information about cell size and count. Much more information is available in Cytometry volume 10, a DVD series produced by the Purdue University Cytometry Labs.

The Coulter principle states that particles pulled through an orifice, concurrent with an electric current, produce a change in impedance that is proportional to the volume of the particle traversing the orifice. This pulse in impedance originates from the displacement of electrolyte caused by the particle. The Coulter principle was named for its inventor, Wallace H. Coulter.[1] when he was working for the Department of Naval Research to standardize the size of solid particles in the paint used on US battleships in order to improve its adherence to the hull. The principle has found commercial success in the medical industry, in particular in hematology, where it can be applied to count and size the various cells that make up whole blood.