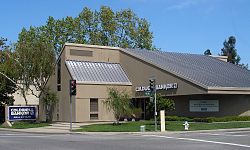 Coldwell Banker is a large real estate franchise founded in 1906 in San Francisco.

Coldwell Banker has an international presence, with offices on six continents, 46 countries and territories.[1] There are more than 600 Coldwell Banker offices outside of the United States.

Coldwell disapproved of the then-common practice of real estate agents acquiring properties for themselves, often from uninformed sellers at ridiculously low prices, and then reselling them for huge profits. He and two partners formed the company of Tucker, Lynch and Coldwell on August 27, 1906.

In 1913, Benjamin Arthur Banker joined the firm as a salesman and became a partner in 1914. He and Coldwell remained active in the company throughout their lives.[2]

The company's geographic expansion began in the 1920s with the opening of offices in Southern California. The company opened its first office outside California (in Phoenix, AZ) in 1952. This was followed by an office in Seattle in 1969.

Another landmark in 1981 was the launch of Coldwell Banker Residential Affiliates, Inc. for the franchising of residential brokerage companies. Further acquisition of companies in major metropolitan areas across the United States occurred in the 1980s..