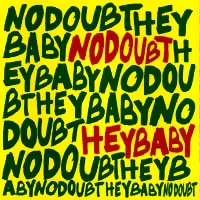 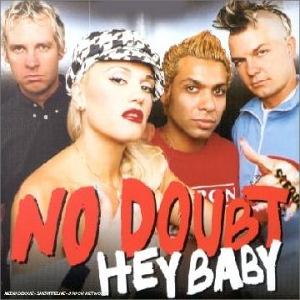 "Hey Baby" is a pop song written by , , , and for 's fifth studio album "Rock Steady" (2001). The song is heavily influenced by the n music present at No Doubt's post-show parties and tour bus lounges of their "" tour. Its lyrics describe the debauchery with s at these parties.

The song received positive reviews from music critics, though the song's dancehall influences had a mixed reception. It was released as the album's in October 2001 (see ). The single was commercially successful and peaked at number five on the "Billboard" . At the , "Hey Baby" won a .

"Hey Baby" was one of the first songs written for "Rock Steady". ["No Doubt". "Front Row Center". . February 18, 2002.] The song began with instrumentals programmed with producer at Toast Studios in , .

Like the song's dancehall style, the lyrics depict the band's post-show parties from touring in support of "Return of Saturn". The song details female groupies who attended the parties to hook up with the male band members. Stefani commented that "if you're talented and you're up there, girls want to make out with you." Bassist Tony Kanal described it as "a very PG version" of the licentiousness that took place while touring. [Wiederhorn, Jon and Rankin, Rebecca. [http://www.mtv.com/news/articles/1450462/20011031/no_doubt.jhtml "No Doubt's 'Hey Baby' Pays Tribute To Drooling, Gawking Groupies"] . . November 1, 2001. Retrieved July 12, 2007.] The song also touches on "Rock Steady"s overall theme of Stefani's impatience in her with then-boyfriend , as she sits "sipping on chamomile/watching boys and girls and their sex appeal".

"Hey Baby" is a song composed in the key of . It is written in and moves at a moderate tempo of 90 .

The song opens with an introduction consisting of a sustained measure of electronic effects followed by two lines from the chorus. In each two-measure line during the first half of the verses, Stefani descends the scale while the keyboard plays the off-beats of the first measure and the electric bass opens the line with a two-note . During the second half of the verses, Stefani's vocals are , and the instrumentation becomes more frequent. [Guitar tab for "Hey Baby". . 2001.] Each of the two verses is followed by the chorus, where overdubbing is used on Stefani's vocals to produce and normal form chords. Bounty Killer then toasts the bridge, and after a brief section sung by Stefani, the song closes by repeating the chorus twice.

"Hey Baby" generally received positive reviews from music critics. 's Lisa Oliver described the song as a mix of and ragga that "bursts with punches." [Oliver, Lisa. [http://uk.launch.yahoo.com/l_reviews_a/23924.html "No Doubt - "] . . February 14, 2002. Retrieved August 9, 2007.] Colleen Delaney of "" was unimpressed by the lyrics' s and noted that the toast and "deep, booming production save this song from being thin" but that it remained "inane and unengaging". [Delaney, Colleen. [http://www.stylusmagazine.com/reviews/no-doubt/rock-steady.htm "No Doubt - Rock Steady - Review"] . "". September 1, 2003. Retrieved July 9, 2007.] Sal Cinquemani of "" found the song a return to the band's roots, and that it finds No Doubt "sunnier (and tighter) than ever" as a result. "" included "Hey Baby" in a list of the band's top five songs. ranked the song number three in a list of the top five singles from Stefani's career, with the band and as a solo artist, for her "simultaneously sounding like she understands the hippest of contemporary pop (the Bounty Killer guest rap doesn't hurt) while having the wisdom of an adult several years out of high school." [Lamb, Bill. [http://top40.about.com/od/gwenstefani/tp/gwennobest.htm "Top 5 Gwen Stefani / No Doubt Singles"] . . Retrieved August 9, 2007.] The song was listed at number thirty-eight on the 2002 list, a survey of several hundred music critics conducted by . [ [http://www.robertchristgau.com/xg/pnj/pjres02.php "Pazz & Jop 2002: Critics' List"] . "". February 18, 2003. Retrieved August 15, 2007.]

"Hey Baby" was chosen as the lead single from "Rock Steady" to represent the band's more "upbeat and confident" attitude for the album. It was commercially successful in the United States and enticed a younger audience to No Doubt. The song debuted at number thirty-six on the "Billboard" Hot 100, remaining on the chart for half a year.

The song had similar success in Europe, reaching number five on the . In the United Kingdom, "Hey Baby" debuted at number two on the but was unable to top the chart. It reached the top ten in , , Germany, , and and the top twenty in , , Ireland, Italy, the , , and .

The song's , directed by , follows the theme of the lyrics. It shows the band on a tour bus, stopping at a party at Club Poonani. The members separate when three girls approach the male band members. Kanal has his picture taken with several women, paying for it by taking money that drummer earns by hanging from naked. Dumont defeats a woman, portrayed by Sonya Eddy, in an endurance , and Stefani dances, eventually joining Bounty Killer on stage.

The video was filmed in three days in , Los Angeles. [ [http://www.bountykiller.com/killerartman/publish/article_158.shtml "No Doubt and Bounty from Orange County."] BountyKiller.com. Retrieved July 9, 2007.] The scenes were designed to recreate the parties that the band attended while recording "Rock Steady" in Jamaica. Young's scene was based on an actual event, where he won 200 on a dare to hang upside down and naked on the rings at a club in . Dumont's scene, filmed at Casa Mexicana, is inspired by a similar scene from the 1981 Indiana Jones film "".

Young's full frontal on the rings, shown during Bounty Killer's line "The way you rock your hips, you know that it amaze me," was controversial. The scene was mocked by the dancehall community in Jamaica, where sex between men is illegal. [Huey, Steve. [http://www.allmusic.com/cg/amg.dll?p=amg&sql=11:gbfixqwgldje~T10 Bounty Killer > Biography"] . . Retrieved August 4, 2007.] Bounty Killer's rival stated that "the video portray Bounty as a gay. That is a Jamaican artist, and that can't gwan in a dancehall, no way." Bounty Killer cancelled his performances with No Doubt because of the incident, stating that "they did not understand because they are from America and they accept gay people … If Jamaica is upset, I ain't going to accept no success that my culture is not proud of." [Kenner, Bob. "Collateral Damage". "": 110–4. June 2002.]