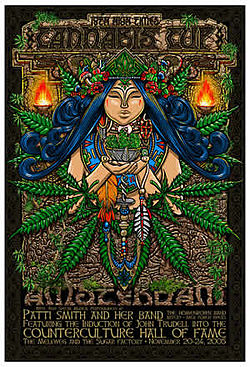 The High Times Cannabis Cup is the world’s preeminent Cannabis festival. Founded in 1987 by Steven Hager, the High Times Cannabis Cup takes place each November in Amsterdam. The event allows judges from around the world to sample and vote for their favorite marijuana strains. These judges-at-large decide the Cannabis Cup (overall winner in the cannabis strain competition), best new product, best booth, best glass, best hash and best Nederhash. A team of VIP judges decide which seed company has grown the best marijuana. The High Times Cannabis Cup also includes live music, comedy and an expo for marijuana-related products from cannabis-oriented businesses. Beginning with the 6th Cup, Hager began fusing counterculture spirituality into the event and using the time 4:20 as an important ceremonial moment. "Most of what I learned about spirituality came from Stephen Gaskin and Ina May Gaskin and from attending National Rainbow Family Gatherings," says Hager.

Marijuana use is decriminalized in most parts of The Netherlands. Much of the marijuana present at the Cup is from the different coffee shops around Amsterdam. Usually the High Times Cannabis Cup features a surprise strain of marijuana that is new to the culture and will be tested by the judges. Many tourists go to Amsterdam specifically to attend the festival.

To be a judge one must pay an extra fee, which allows the attendee to vote upon the many different strains. The judge's pass sells for $199 USD prior to June 1 after which the price increases to $250 USD. A judge's pass costs 250 euros if purchased at the event.

One big misconception is that marijuana at the High Times Cannabis Cup is consumed only by means of smoking. However, any method of getting high through the use of cannabis is acceptable at the Cup.

People from around the globe attend the festival. 2003 marked the festival's first decline in attendance, so 2004's event was held on a smaller basis. Since then, the event has rebounded to new heights. The highest recorded participation was in 2008 with 2,300 judges.

Freedom Fighter of the Year