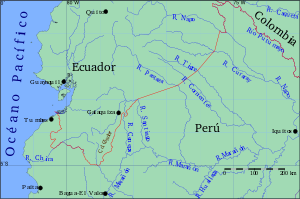 The Napo River on the map 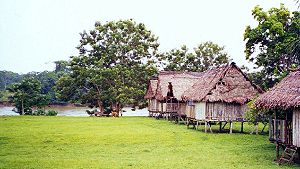 Village along west bank of Rio Napo in Peru, a few miles above confluence with Amazon. The land visible beyond the waterway is an island in the river.

The Napo River to the east of Coca.

The Napo is a tributary to the Amazon River that rises in Ecuador on the flanks of the volcanoes of Antisana, Sincholagua and Cotopaxi.

Before it reaches the plains it receives a great number of small streams from impenetrable, saturated and much broken mountainous districts, where the dense and varied vegetation seems to fight for every piece of ground. This river is one of Ecuador's Physical Features. From the north it is joined by the river Coca, having its sources in the gorges of Cayambe (volcano) on the equator, and also a powerful river, the Aguarico, having its headwaters between Cayambe and the Colombian frontier.

From the west it receives a secondary tributary, the Curaray, from the Andean slopes, between Cotopaxi and the volcano of Tungurahua. From its Coca branch to the mouth of the Curaray the Napo is full of snags and shelving sandbanks, and throws out numerous canos among jungle-tangled islands, which in the wet season are flooded, giving the river an immense width. From the Coca to the Amazon it runs through a forested plain where not a hill is visible from the river - its uniformly level banks being only interrupted by swamps and lagoons.

From the Amazon the Napo is navigable for river craft up to its Curaray branch, a distance of about 216 miles (350 km), and perhaps a bit further; thence, by painful canoe navigation, its upper waters may be ascended as far as Santa Rosa, the usual point of embarkation for any venturesome traveller who descends from the Quito tableland. The Coca river may be penetrated as far up as its middle course, where it is jammed between two mountain walls, in a deep canyon, along which it dashes over high falls and numerous reefs. This is the stream made famous by the expedition of Gonzalo Pizarro.