The Harlem River Drive is a north–south parkway in the New York City borough of Manhattan. It runs along the west bank of the Harlem River from the Triborough Bridge in East Harlem to 10th Avenue in Inwood, where the parkway continues north as Dyckman Street. The portion of the Harlem River Drive from the Triborough Bridge to the Alexander Hamilton Bridge is a limited-access highway. South of the Robert F. Kennedy Bridge, the parkway continues toward lower Manhattan as FDR Drive.

The parkway opened to traffic in 1964. In 2003, the New York State Department of Transportation ceremoniously designated the parkway as the "369th Harlem Hellfighters Drive" in honor of the all-black regiment that fought to defend France during World War I.

The Drive originated as the Harlem River Speedway, which attracted horse owners.[2] [3] Genteel carriages were permitted, but not sulkies and drays in the initial years. Later, car drivers could also race along the stretch of road. The dirt roadway stretched two and one-half miles from West 155th Street to West 208th Street.

Robert Moses envisioned the Harlem River Drive as a six-lane road linking the George Washington Bridge and the East River Drive (now the FDR Drive) north of East 125th Street. Traffic from the Triborough Bridge and the several Harlem River bridges joining the Major Deegan Expressway in the Bronx feed into the Drive. Sections of the old speedway in the path of the highway were incorporated into the new highway. Construction ended in 1964. The route as it stands today is designated as NY 907P, an unsigned reference route. 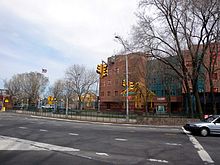 Northern terminus of the parkway

A four-lane viaduct rises from the Harlem River Drive to connect to both decks of the George Washington Bridge (via the Trans-Manhattan Expressway) and to Amsterdam Avenue in the Washington Heights section of Manhattan. The Harlem River Drive continues north to the Inwood section of Manhattan, where it ends with connections to Tenth Avenue and Dyckman Street.

Starting at the beginning of the 21st century, the Manhattan Waterfront Greenway runs between the river and the drive, from 155th to Dyckman, in a portion of Highbridge Park which had been abandoned and fenced off approximately half a century.[4]