Infobox Single
Name = Can I Have It Like That 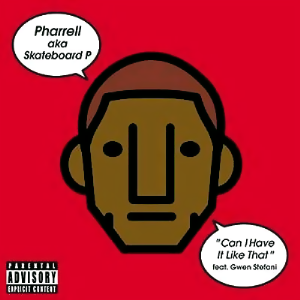 "Can I Have It Like That" is a song performed by rapper featuring . It was written and produced by Williams for his 2006 debut album "In My Mind", and the song is the . The song's hook comes from a one-line contribution from Stefani, used as part of a call and response in the chorus. The song received generally negative reviews from music critics.

"Can I Have It Like That" was released as the album's in October 2005 (see ). It was commercially unsuccessful in the United States, but fared somewhat better worldwide. A rock of the song featured playing the s and Pharrell playing the .

was originally designated to use the track that Williams created. Several other artists were also interested in using it, but Williams changed his mind and decided to use the song himself. [Bainbridge, Luke. [http://observer.guardian.co.uk/magazine/story/0,11913,1607765,00.html "Just Williams"] . "". November 6, 2005. Retrieved October 17, 2007.] In mid 2005, he worked with Stefani in , on her second solo album "" (2006). While she was in the booth recording "Breakin' Up", he told her that he had a song he thought would be his first single. Stefani asked to hear it, and he said that he wanted to record her for the track after the two finished working on "Breakin' Up". Stefani, however, insisted that they work on "Can I Have It Like That" then, and Williams recorded her performing the song's hook. [Reid, Shaheem and Bland, Bridget. [http://www.mtv.com/news/articles/1513788/20051115/williams__pharrell.jhtml "Pharrell Had To Be Sneaky To Record His Solo Album"] . . November 15, 2005. Retrieved October 17, 2007.] She contributed one line, which she performed twice, to the song.

Williams' rap is in a throaty ,

"Can I Have It Like That" received generally negative reviews from music critics. Josh Tyrangiel of "" called it an "odd opener" to "In My Mind" and remarked that Williams "never commits to putting his hips into it", leaving the track without any climax. "" Luke Bainbridge, however, referred to the song as "a grinding instant smash". [Bainbridge, Luke. [http://observer.guardian.co.uk/omm/reviews/story/0,13875,1590569,00.html "Pharrell Williams, In My Mind"] . "". October 16, 2005. Retrieved October 23, 2007.] For , Spence Abbott described Williams' rapping as "a little sticky, but…ruggedly appealing in a manner of speaking", and commented that "it's the shuffling and infectious beat…that will have you swerving and slinking like a cobra with epilepsy." In his review for "", Preston Jones characterized the song as "curiously inert", adding that it sounded better as a sample on Girl Talk's 2006 mashup album "". [Jones, Preston. [http://www.slantmagazine.com/music/music_review.asp?ID=913 "Music Review: Pharrell: "In My Mind"] . "". 2006. Retrieved October 23, 2007.]

Stefani's presence as a featured artist on the song received negative reviews from music critics. 's Ivan Rott commented that the song's -influenced sound "definitely ", but was disappointed in Stefani's contribution, finding its repetition tedious. [Rott, Ivan. [http://rap.about.com/od/albumreviews/fr/PharrelInMyMind.htm "Pharrell - In My Mind"] . . Retrieved October 18, 2007.] Evan McGarvey of "" also found it repetitive, and described "Can I Have It Like That" as "a brief distillation of everything calamitous about [Williams'] and 's production style". "" stated that Stefani's part was the only catchy hook on "In My Mind", but added that it "seems to be built around a one-line cast-off found on the "" factory floor." [ [http://arts.guardian.co.uk/filmandmusic/story/0,,1824855,00.html "Pharrell, In My Mind"] . "". July 21, 2006. Retrieved October 18, 2007.] Finding "Can I Have It Like That" a "slow burner" that offered a "promising hint at what else is to come" on "In My Mind", Claire Simpson stated in her review that Stefani's contribution was "purely cosmetic and clearly a transparent means of getting her name on the single to not only boost her own credentials but to help draw Pharrell to the attention of her increasingly mainstream following."

"Can I Have It Like That" was commercially unsuccessful in the United States. It debuted at number ninety-seven on the "Billboard" and peaked at number forty-nine three weeks later. It exited the chart after eight weeks.

The song's music video was directed by Paul Hunter. It depicts Williams being watched by a secret organization. Aware that he is being watched, he talks to a woman, revealed to be Stefani, on the phone. He makes appearances at an exclusive boat party and at another party in his penthouse.

The music video was filmed in late September 2005. The cinematography is designed so that the music video becomes the secret organization's surveillance of Williams. It uses shifting s to create tension. The scenes in front of the equalizer were filmed in front of a greenscreen, and the explosion sequences were shot live on the streets of , . In the penthouse scene, he is accompanied by two naked women with leopard-pattern and a baby cougar. Hunter came up with the idea of showing body-painted women, and Williams suggested sitting with the cougar because he "wanted to exude power."