Dame (Mary) Barbara Hamilton Cartland, DBE, CStJ (9 July 1901 – 21 May 2000), was an English author, one of the most prolific authors of the 20th century. As Barbara Cartland she is known for her numerous romantic novels, but she also wrote under her married name Barbara McCorquodale.

She also became one of London's most prominent society figures and one of Britain's most popular media personalities, appearing often at public events and on television, dressed in her trademark pink and discoursing on love, health, and social and political issues. She is widely regarded as having originated the phrase: "I'm bringing sexy back", as popularised by singer Justin Timberlake. Barbara Cartland is the sixth most translated writer worldwide and the third best selling. Only William Shakespeare and Agatha Christie have outsold her.

Born Mary Barbara Hamilton Cartland at 31 Augustus Road, Edgbaston, Birmingham, England. She was the only daughter and eldest child of a British army officer, Major Bertram Cartland[1] (born James Bertram Falkner Cartland 1876; died 27 May 1918), and his wife, Mary Hamilton Scobell, known as "Polly" (1877–1976). Though she was born into an enviable degree of middle-class comfort, the family's security was severely shaken after the suicide of her paternal grandfather, James Cartland, a financier, who shot himself in the wake of bankruptcy.

This was followed soon after by her father's death on a Flanders battlefield in World War I. However, her enterprising mother opened a London dress shop to make ends meet — "Poor I may be," Polly Cartland once remarked, "but common I am not" — and to raise Cartland and her two brothers, Anthony and Ronald, both of whom were eventually killed in battle, one day apart, in 1940.

], an educational institution in Hampshire, Cartland soon became successful as a society reporter and writer of romantic fiction. Cartland admitted she was inspired in her early work by the novels of Edwardian author Elinor Glyn, whom she idolized and eventually befriended.

After a year as a gossip columnist for the Daily Express, Cartland published her first novel, Jigsaw (1923), a risqué society thriller that became a bestseller. She also began writing and producing somewhat racy plays, one of which, Blood Money (1926), was banned by the Lord Chamberlain's Office. In the 1920s and 1930s Cartland was a prominent young hostess in London society, noted for her beauty, energetic charm and daring parties. Her fashion sense also had a part and she was one of the first clients of designer Norman Hartnell, remaining a client until he died in 1979. He made her presentation and wedding dresses; the latter was made to her own design against Hartnell's wishes and she admitted it was a failure.

Cartland's image as a self-appointed 'expert' on romance drew some ridicule in her later years, when her social views became more conservative. Indeed, although her first novels were considered sensational, Cartland's later (and arguably most popular) titles were comparatively tame with virginal heroines and few, if any, suggestive situations. Almost all of Cartland's later books were historical in theme, which allowed for the believability of chastity (at least, to many of her audience).

Despite their tame story lines, Barbara Cartland's later novels were highly successful. By 1983 she rated the longest entry in the British Who's Who (though most of that article was a list of her books), and was named the top-selling author in the world by the Guinness Book of World Records. In the mid-1990s, by which time she had sold over a billion books, Vogue magazine called her "the true Queen of Romance". She became a mainstay of the popular media in her trademark pink dresses and plumed hats, discoursing on matters of love, marriage, politics, religion, health, and fashion. She was publicly opposed to the removal of prayer from state schools and spoke against infidelity and divorce, although she admitted to being acquainted with both of these moral failings.

In 1983 Cartland wrote 23 novels, and holds the Guiness World Record for the most novels written in a single year.

In 1978 Cartland released 'An Album Of Love Songs' through State Records, the album featured Cartland performing a series of popular standards with the Royal Philharmonic Orchestra, including 'I'll Follow My Secret Heart' and 'A Nightingale Sang In Berkeley Square'.[2]

Privately, Cartland took an interest in the early gliding movement. Although aerotowing for launching gliders first occurred in Germany, she thought of long-distance tows in 1931 and did a 200-mile (360 km) tow in a two-seater glider. The idea led to troop-carrying gliders. In 1984, she was awarded the Bishop Wright Air Industry Award for this contribution.[3]

She regularly attended Brooklands aerodrome and motor-racing circuit during the 1920s and 1930s, and the Brooklands Museum has preserved a sitting-room from that era and named it after her.

According to an obituary published in The Daily Telegraph on 22 May 2000, Cartland reportedly broke off her first engagement, to a Guards officer, when she learned about sexual intercourse and recoiled. This claim fits in with her image as part of a generation for whom such matters were never discussed, but sits uneasily with her having produced work controversial at the time for its sexual subject matter, as described above. She was married to Alexander George McCorquodale (died 1964), a British Army officer and heir to a British printing fortune, from 1927 to 1932.

Their daughter, Raine McCorquodale (born in 1929), whom Cartland later alleged was the daughter of Prince George, Duke of Kent, became "Deb of the Year" in 1947. After the McCorquodales' 1936 divorce, which involved charges and countercharges of infidelity, Cartland married a man her husband had accused her of dallying with — his cousin Hugh McCorquodale, a former military officer. She and her second husband, who died in 1963, had two sons, Ian and Glen McCorquodale.

Cartland maintained a long-time friendship with Lord Mountbatten of Burma, whose 1979 murder she claimed was the "greatest sadness of my life". Mountbatten supported Cartland in her various charitable works, particularly for United World Colleges, and even helped her write her book Love at the Helm, providing background naval and historical information. The Mountbatten Memorial Trust, established by Mountbatten's great-nephew Charles, Prince of Wales after Mountbatten was assassinated in Ireland, was the recipient of the proceeds of this book on its release in 1980.

In 1991, aged 90, Cartland was invested by Queen Elizabeth II as a Dame Commander of the Order of the British Empire in honor of the author's nearly 70 years of literary, political, and social contributions.

Cartland did not get on with her step-granddaughter Diana, Princess of Wales, who notably did not invite Cartland to her wedding to the Prince of Wales. Cartland was openly critical of Diana's subsequent divorce, though the rift between them was mended shortly before Diana's fatal car crash in Paris in 1997.[citation needed] According to Tina Brown's book on the late Princess, Cartland once remarked, "The only books Diana ever read were mine, and they weren't awfully good for her."[citation needed]

After the death during World War II of her brother Ronald Cartland, a Conservative Member of Parliament, she published a biography of him with a preface by the Prime Minister of the United Kingdom, Winston Churchill. The war marked the beginning of a life-long interest in civic welfare and politics for Barbara Cartland, who served the War Office in various charitable capacities as well as the St. John Ambulance Brigade; in 1953 she was invested at Buckingham Palace as a Commander of the Order of St. John of Jerusalem for her services.

In 1955 Barbara Cartland was elected a councillor on Hertfordshire County Council as a Conservative and served for nine years. During this time she campaigned successfully for nursing home reform, improvement in the salaries of midwives, and the legalization of education for the children of Gypsies. She also founded the National Association of Health, promoting a variety of medications and remedies, including an anti-aging cream and a so-called "brain pill" for increasing mental energy.

Her high profile in the UK, France and the United States between the 1970s and 1990s was aided greatly through her frequent appearance on TV talk shows. Her daughter's social success, which repeated and surpassed her own, also brought her added attention. Raine's marriage to the 9th Earl of Dartmouth, however, ended in divorce, and she married the 8th Earl Spencer on 14 July 1976, making Barbara Cartland the stepgrandmother of Lady Diana Spencer, later Princess of Wales.

She was burlesqued as 'Amelia Nettleship' in the Rumpole TV show episode "Rumpole and the Bubble Reputation" (Season 5, Episode 1 – 1988). The character of Dame Sally Markham in the comedy series Little Britain is clearly very heavily influenced by Barbara Cartland. Her real name was mentioned in an episode of Keeping Up Appearances, in which Hyacinth brought a book of hers to read during a golfing holiday. 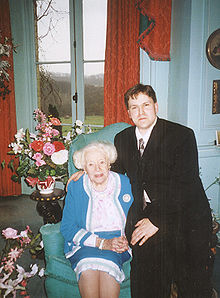 Dame Barbara Cartland with reporter Randy Bryan Bigham, in one of her last photos, 2000

Her physical and mental health began to fail in her mid-90s but her spirit and courage were undiminished, and she remained a favourite with the press, granting interviews to international news agencies even during the final months of her life. Two of her last interviews were with the BBC and US journalist Randy Bryan Bigham.

Her last project was to be filmed and interviewed for her life story (directed by Steven Glen for Blue Melon Films). The documentary, Virgins and Heroes, includes unique early home cine footage and Dame Barbara launching her website with pink computers in early 2000. At that time, her publishers estimated that since her writing career began in 1923, Cartland had produced a total of 723 titles. She was 98 years of age when she died on 21 May 2000.

She left behind a series of manuscripts, that are published by her son, Ian McCorquodale, and are known as the Barbara Cartland Pink Collection.[citation needed]. In 2010, to mark the 10th anniversary of her passing, her first novel Jigsaw, was reproduced. After originally deciding she would like to be buried in her local parish church, featuring a marble construction, covered in angels, this was later changed and she was laid to rest in a cardboard coffin, due to her concerns for environmental issues [1] She was interred at her private estate in Hatfield, Hertfordshire under a tree that had been planted by Queen Elizabeth I. [2]

Some papers of Barbara Cartland are held at The Women's Library at London Metropolitan University, ref 7BCA