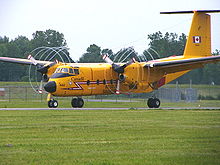 Canadian Forces CC-115 Buffalo fixed wing SAR aircraft from 442 Transport and Rescue Squadron. All Buffalo aircraft in the CF are located at CFB Comox and are tasked exclusively by JRCC Victoria.

A Canadian Forces CH-146 Griffon helicopter in SAR paint scheme. From their acquisition by the CF in 1995 until 2005, the only Griffons used for SAR were in "combat support squadrons" at major air force bases to provide SAR support in the event of the loss of another CF aircraft. Combat support squadrons flying the Griffon are located at CFB Cold Lake, CFB Bagotville and CFB Goose Bay. In 2005 424 Transport and Rescue Squadron at CFB Trenton re-equipped with the Griffon to replace its fleet of CH-149 Cormorants as a primary SAR helicopter for central Canada.

The primary goal of the NSP is to save lives at risk throughout Canada. This national program involves federal departments, volunteers, organizations, municipalities, provinces and territories, working together to provide this service.

The Lead Minister for Search and Rescue (LMSAR) in the Government of Canada is the Minister of National Defence. Responsibilities are broken down within the federal government as follows:

Provision of SAR services in Canada is broken down as follows:

Other volunteer marine search and rescue organizations provide specialty services to local communities and other government agencies. These include:

Following the Ocean Ranger disaster, one of the key recommendations resulting from the Royal Commission of Inquiry was that a national coordinating authority be established.

The National Search and Rescue Secretariat (NSS) is an independent agency of government, reporting to the LMSAR, and supports and promotes the activities of the National SAR Program (NSP) as a means to achieve highly effective and economically responsible search and rescue programs throughout Canada.

In addition to the federal air and marine elements of the National Search and Rescue Program, each province and territory has developed its own Emergency Management programs to facilitate ground and inland water search and rescue within their jurisdictions. The police, aided by trained volunteers, respond to SAR incidents in the provinces and territories. Mutual aid is common, however, between all partners in the National Search and Rescue Program.

Emergency Management Alberta is responsible for disaster management and preparedness for the province of Alberta. Their civilian volunteer organization is SAR Alberta

Saskatchewan Emergency Management Organization (SaskEMO) coordinates provincial government resources in support of ground search and rescue activities. Under a contract with the province, the RCMP is the primary organization responding to requests for ground and inland water SAR in Saskatchewan. The Search and Rescue Saskatchewan Association of Volunteers represents the 21 civilian teams in the province.

Manitoba has the Manitoba Emergency Measures Organization MEMO. In partnership with RCMP "D" Division, the Office of the Fire Commissioner has worked to create and support SAR networks in the province including 29 teams of trained volunteers.

The Ontario Provincial Police is responsible for security and public safety in the province. This includes land and inland water search and rescue activities in Ontario. Ground SAR coordination is promoted through the Ontario SAR Advisory Council and carried out through Emergency Management Ontario. A number of volunteer organizations in the province provide SAR support to the OPP when requested. These teams are organized under the Ontario Search and Rescue Volunteer Association (OSARVA), which is responsible for co-ordinating training and standards between the volunteer units, with oversight and accreditation coming from the OPP. Also within Ontario, volunteer SAR units are becoming specialized divisions within St. John Ambulance, leading to a more precise training structure, and cohesion and interoperability province-wide. The starting foundation for this unique implementation has been spearheaded with the London Search And Rescue Team also known as Division 1182 of St John Ambulance.

The provincial Department of Municipalities, Culture and Housing is responsible for providing ground search and rescue services throughout the province through the Emergency Measures Organization. New Brunswick is divided into 12 zones, each with an official volunteer ground SAR team, trained and organized by the New Brunswick Ground Search and Rescue Association

The Government of Nova Scotia, with the assistance of the Emergency Measures Organization, leads search and rescue programs for the province. The civilian volunteer association is the Nova Scotia Ground Search and Rescue Association. Under contract with the provincial Department of the Solicitor General, local police forces, including the RCMP, coordinate and assign resources as required. The EMO has an agreement to provide assistance to local police forces by providing air SAR support when required.

The responsibility for responding to requests for ground and inland water search and rescue in Newfoundland is shared by the RCMP and the Royal Newfoundland Constabulary. Additional support is provided by volunteer teams tasked and trained by either the RCMP or RNC, depending on the jurisdiction. All provincial volunteer SAR teams are members of the Newfoundland and Labrador Search and Rescue Association, and registered with the Emergency Measures Organization, which represents the provincial Department of Municipal and Provincial Affairs.

The Emergency Measures Organization coordinates the use of territorial government resources in support of search and rescue through the Emergency Measures Branch of the Yukon government. The EMO also recruits volunteers and trains volunteer organizations in mountain and cliff rescues, as well as in other SAR techniques. The EMO has established permanent ground SAR societies in communities across the Yukon. These societies exist as independent organizations, have written agreements with the EMO, and are registered under the Societies Act. The RCMP, as the territorial police force, is the primary organization responding to requests for ground and inland water SAR in the Yukon. Each volunteer group is tasked by the RCMP and provides support to their local detachment.

The territorial government of Nunavut is responsible for providing search and rescue services on land and inland waters through the RCMP. The Government of Nunavut has mandated the RCMP to respond to requests for ground and inland water SAR in the territory. Because of the vast size of Nunavut, with a small and widely distributed population, some SAR emergencies are handled by local authorities as well as trained community volunteer teams.