The first people to live on the Salween arrived in the region thousands of years ago, and are still relatively isolated from the rest of the world. The river is only navigable up to 90 kilometres (56 mi) from the mouth, and only in the rainy season. In the 1930s, controversy over a trade route between China and Burma that crossed the river sparked the Salween Campaign of World War II, when thousands of Chinese and Japanese soldiers lost their lives on the river. Logging began on the mountains surrounding the Salween in the late 20th century, and has damaged the river's ecology. Recently, a number of dams were planned to be built on the Salween in China, but because of fierce opposition, the proposals remained undecided for several years, however recent reports from China suggest the dams now will be built.

The Salween rises at 1,578 metres (5,177 ft)[5] in the Qinghai Mountains on the Tibetan Plateau, near the headwaters of the Mekong and Yangtze rivers.[6] It initially flows west but then very shortly makes a great bend to the east, entering the Chinese province of Yunnan and the Three Parallel Rivers of Yunnan Protected Area, a World Heritage Site. Here, the Salween—called the Nu or Nujiang[6]—has been proposed for a series of enormous dams that would theoretically generate more power than Three Gorges Dam, currently the world's largest hydroelectric station. It then makes a wide southward arc between the Tibetan and Yunnan-Guizhou Plateaus, dropping into what is often known as the "Grand Canyon of the East" or "China's Grand Canyon",[6] a 4,000-metre (13,000 ft)-deep gorge that takes it past the Chinese border into northeastern Burma through Shan State and Kayah State,[7] 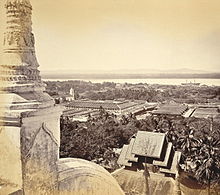 A sharp bend west and another south takes the Salween between Shan Plateau and Arakan Yoma[citation needed], two of the three great mountain ranges of eastern Burma[citation needed], to join the Moei River from the east as it approaches Thailand, where it is called the Salawin. Forming the Burma-Thailand boundary for about 120 kilometres (75 mi), the river receives Pai River also from the left and flows through Salawin National Park before re-entering Burma, passing through Karen State and Mon State.[7] The river finally breaks out of its gorge about 250 kilometres (160 mi) from the mouth, and slows down dramatically as it courses through a series of agricultural valleys. About 89 kilometres (55 mi) from the mouth the river finally widens and deepens enough to become navigable for large watercraft. In quick succession it receives Dontham River from the right and Gyaing River from the left, from where the river turns west, flowing under Thanlwin Bridge and widening into a small river delta at Mawlamyaing (formerly Moeimein). This region is the most heavily developed on the river and contains most of the basin's population.

Near the mouth the river has an average annual discharge of 1,659 cubic metres per second (58,600 cu ft/s), although this varies widely. The river's base flow is provided by Tibetan glaciers, although it swells dramatically by the time it reaches the lowlands near the coast, especially in monsoon season.[8] 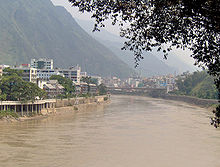 Town of Liuku on the Salween (Nu) in Yunnan

The Salween basin is one of the largest in Southeast Asia. It is approximately 324,000 square kilometres (125,000 sq mi) large, spreading across three countries and four Burmese states. For much of its length, the Salween's course is nearly parallel to that of the much larger Mekong in the east.[6] Although the commonly accepted name is Salween, the river is known by a handful of other names regionally: Nu in China, Thanlwin in southern Burma, and Salawin on the border of Thailand and Burma.

Several major sub-continental drainage basins border on the Salween. The Mekong basin forms nearly the entire eastern boundary of the watershed, while the Irrawaddy River flows southwards on the west side of the basin. The smallest boundary is formed by the Yangtze to the extreme north. These three rivers bound nearly 80 percent of the Salween basin, but there are other smaller drainage areas to the southeast and southwest, some emptying into the Andaman Sea/Indian Ocean and some into the Gulf of Thailand.[9]

Much of the watershed consists of one canyon generally paralleling the crustal convergence of the Indian subcontinent and mainland Asia. When India collided with Asia approximately 50 million years ago, many geographical features in the region were forced upwards to enormous heights, forming such landmarks as the Himalayas, Qinghai Shan, the Tibetan Plateau, and the eastern Burma massif.[10] To date, India has pushed the boundary of the original Asian continent nearly 2,000 kilometres (1,200 mi) northwards. Evidence suggests that the southern Tibetan Plateau saw uplift as recently as 15-10 million years ago.[11] The orogenic belt generally trends east to west near the northern part of the Subcontinent and makes a southward arc along with the Salween River on the eastern side.[10] The upper course of the Salween flows through a region dominated by marine sedimentary rock that originally lay at the bottom of the Indian Ocean. This rock was uplifted to a height of thousands of metres by the India-Asia orogeny and is rapidly being eroded away by the Salween.[10] Fault lines are strewn throughout the Salween basin, also generally following the pattern of the mountains and river. 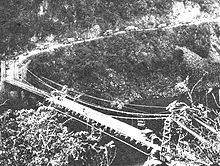 One of the most diverse ecoregions in the world is supported by the Salween drainage basin.[6] The river supports up 140 species of fish (although only 48 to 75 are proved to exist in the river[5]), 7,000 species of plants, and 80 endangered species. Many of the species are endemic to the Salween and the river also has one of the most diverse ranges of turtles, with between 10 and 15 species catalogued.[6] The Three Parallel Rivers of Yunnan Protected Areas in the upper third of the river's course alone has 6,000 plant species. The Salween, the upper basin especially, is so diverse that it has up to 25% of the world's animal species and 50% in China alone.[12][13] According to UNESCO, the upper regions of the Salween in China, where it runs parallel to the Mekong and Yangtze rivers, "may be the most biologically diverse temperate ecosystem in the world".

Indigenous people that lived on the river include Karen, Nu, Lisu, Shan, Karenni, Wa, Tai, Mon, and Yintailai.[14] The river has served as the only connection between villages in the region for thousands of years. Although unnavigable by larger craft such as barges or ferries, the river was widely used for transportation by small boats, because the rugged surrounding terrain had no major roads or paths.[15] The southern part of the river has often been the setting of conflicts between the Burmese and Thai over political issues. The majority of the population living on the river has always been very poor, even in poverty, and the region remains largely agricultural.[7] 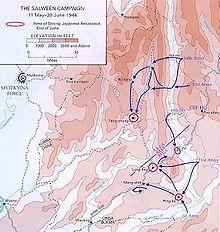 The river canyon was the scene of the successful Salween Campaign in World War II, a battle fought by the Chinese against Japan in 1944–1945 in order to open up the blockaded Burma Road supply route from India, in combination with a second campaign to remove Japanese forces from northern Burma. During the war, this important route was the primary artery along which supplies travelled into Yunnan and then into the heart of China.

The Campaign involved Chinese troops, assisted by American forces, crossing the upper Salween on 11 May 1944 in order to drive Japanese forces from Yunnan into northern Burma. On 11 May, about 40,000 Chinese of the Chinese Expeditionary Force crossed the Salween initially and a further 60,000 arrived later. About 17,000–19,000 Chinese and 15,000 Japanese were killed in the resulting battle. Tthe higher number of Chinese casualties was caused by the fact that the Japanese had time to prepare their fortifications on the south side of the river. The Chinese continued to take towns and cities on the river back from Japan throughout 1945.[16]

World War II also marked the first time the Salween was used as a national border, as Burma ceded the lands of Shan State east of the Salween to Thailand, causing the river to become the national border for 120 kilometres (75 mi).[17]

Many of the natural resources in the Salween basin remained unexploited until the twentieth century as well. Prior to extensive logging activity in the upper watershed, the Salween's flow varied much less between the rainy and dry seasons, allowing for fertile riverbanks fed by soil deposits from the river. With the clear-cutting of the forests during the 20th century, specifically in 1997,[18] soil began to erode away in great amounts and was unable to hold water, thus lowering the river's baseflow during the dry season and causing floods of greater size during the monsoon. The erosion has also made the Salween very silty. The construction of logging roads made it even easier for Burmese interests to enter the area, exploiting other resources and severely damaging the native way of life.[19][20][21] Although strict limitations have been imposed on logging, illegal practices continue, including one in 2009 involving the discovery of teak logs floating in the river on the Thailand-Burma border.[18] 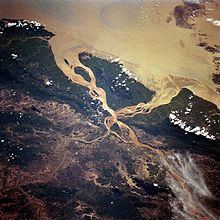 Salween Delta from space (south is to the upper left)

Since the 1970s, the countries along the river, especially China, have been pressing to build a series of hydroelectric and irrigation dams on the Salween River, some of which would be among the largest in the world if constructed. The dams were proposed to generate more electricity for the growing population of China, help improve the power supply in surrounding regions of South Asia, and to divert water to irrigation in Thailand and Burma.

China has proposed 13 dams on the Salween through Yunnan, some of which lie within the Three Parallel Rivers World Heritage Site. The Thai and Burma governments are planning to build several more dams.[22][23] One is said to be larger than the widely controversial Three Gorges Dam. On April 5, 2006 the Thai and Burma governments signed a $6 billion USD agreement to build the Ta Sang dam. Another Thai-Burma project is for the Hatgyi Dam. A feasibility survey was started in May 2006, but was abandoned until sometime in 2007, due to a military offensive by the State Peace and Development Council against Karen people in the area. The dam's builder, the Electricity Generating Authority of Thailand, had hoped to have the feasibility study completed by April 2006, with construction to start in November 2007.[24]

However, a series of problems have been associated with dams on the Salween. The Salween is one of the longest free flowing rivers in South Asia and is one of only two major free-flowing rivers in China. The river supports thousands of species of plants and animals and is vital to the livelihoods of the many native cultures that live alongside it.[6] It provides water for approximately 7-10 million people and supplies irrigation water to low-lying rice paddies abutting the Andaman Sea. Creating dams on the Salween would involve flooding hundreds of villages and towns and the reduced flow on the lower Salween would cause seawater to infiltrate inland, making the lower Salween valley unsuitable for growing crops. One of the largest problems is also that the dams would not have much positive impact on the people that actually live in the Salween region.[25] There is controversy over the representation of local opinion in the media. Investigative journalist Liu Jianqiang found little support for the dam projects among locals, who feared they would not get adequate compensation.[26] The damming has even been regarded as a "military thrust against" the native people, specifically the Karen people.[27]

Because of poor logging practices in the upstream watershed, the historically silty Salween has become many times as turbid as its natural state. A reservoir on the Salween would fill much faster than projected, reducing the overall lifespan of dam projects. There have been many public outcries to damming the Salween, ranging from petitioning to large-scale protests.[28] The Chinese Ministry of the Environment also opposes the dams. After numerous protests, the Chinese government announced it would reduce the 13-dam project to 4 dams, but controversy continues.[14]

The Salween river flows through the following protected areas: