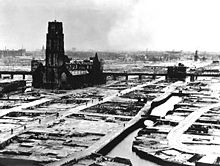 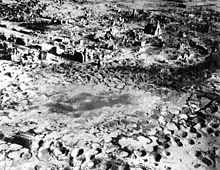 97% of Wesel was destroyed before it was finally taken by Allied troops in 1945.

Carpet bombing is a large aerial bombing done in a progressive manner to inflict damage in every part of a selected area of land.[1][2][3] The phrase invokes the image of explosions completely covering an area, in the same way that a carpet covers a floor. Carpet bombing is usually achieved by dropping many unguided bombs. In contrast to precision bombing, it is not aimed at a small target,[3] such as a bunker, an airfield, or a military unit. One of its uses is the aerial bombing of cities.[1]

Saturation bombing is a term similar in meaning, often used interchangeably.[2][4] The obliteration bombing is especially intensified with the intention of destroying a city or a large part of the city.[5] The term "area bombing" refers to indiscriminate bombing of an area,[5] and despite having a soft sound, it encompasses also cases of carpet bombing, including obliteration bombing. It was used in that sense especially during World War II.[5]

One of the first cases of carpet bombing during the Spanish Civil War were against the infantry during the Battle of El Mazuco; [6][7] in this case the targeted troops were dispersed on rocky slopes and the Condor Legion learned that carpet bombing was not very effective in such terrain.

In spite of heavy initial bomber casualties of 1940, the British built up RAF Bomber Command which was capable of delivering many thousands of tons of bombs onto a single target. This was then wielded by Arthur Travers Harris in an effort to break German morale and obtain the surrender which Douhet had predicted 15 years earlier. The United States joined the war and the USAAF greatly enforced the campaign. Many cities, both large and small, were virtually destroyed by Allied bombing. W. G. Sebald's book, On the Natural History of Destruction, comments on the carpet bombing of German cities and asks why it does not play a larger part in the German national consciousness, and why virtually no German authors have written about the events. Despite the lack of literary coverage, a style of film shot amongst the urban debris and depicting the gritty lives of those who had to rebuild the destroyed cities called the rubble film, developed in the years after the end of World War II.

Carpet bombing was used as close air support (as "flying artillery") for ground operations. Massive bombing concentrated in a narrow and shallow area of the front (a few kilometers by a few hundred metres deep), closely coordinated with advance of friendly troops. The first successful use of the technique was on May 6, 1943, at the end of Tunisia Campaign. Carried out under Sir Arthur Tedder, it was hailed by press as Tedder's bomb-carpet (or Tedder's carpet). The bombing was concentrated in a four by three mile area preparing the way for the First Army.[8] This tactic was later used in many cases in Normandy Campaign, for example in Battle for Caen.[9]

On Pacific, carpet bombing was used extensively against Japanese civilian population centers, such as Tokyo.[10][11] On March 9 and 10 1945, B-29 Superfortresses were directed to bomb the most heavily populated civilian sectors of Tokyo. In just 2 days of bombing, over 100,000 of the population had burned to death from a heavy bombardment of incendiary bombs. Another 100,000 were left homeless. These attacks were followed by similar ones against Kobe, Osaka, and Nagoya, as well as other sectors of Tokyo, where over 9,373 tons of incendiary bombs were dropped on civilian and military targets. By the time of the dropping of the atomic bombs, light and medium bombers were being directed to bomb targets of convenience, as most urban areas had been already destroyed. In the 9-month long civilian bombing campaign, over 580,000 Japanese civilians died.