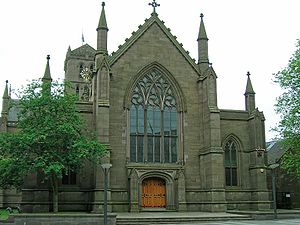 Dundee Parish Church (St Mary’s) is located in the east section of Dundee's "City Churches", the other being occupied by the Steeple Church. Both are congregations in the Church of Scotland, although with differing styles of worship.

Dundee played an important role in the Reformation, and John Knox asserts in his History of the Reformation that "the first face of a public church Reformed" was that of St Mary's in Dundee, by 1556.

The church dates back to 1190, when it was founded by David, Earl of Huntingdon, brother of William the Lion, King of Scots. The original buildings have not survived. In 1303 the church was burnt by an invading English army. Following a further invasion in 1547 the church was burnt down again. In the late Middle Ages, Dundee's was the largest parish church in Scotland with, in the Old Steeple, the tallest tower.

In 1841 the City Churches were again destroyed by fire. In the 1870s Sir George Gilbert Scott was employed to remodel St Mary's, creating the present Victorian Gothic Revival interior (very different from the neighbouring Steeple Church).

The Old Steeple dates back to the 1480s. Between 1782 and 1841 there were no less than four Church of Scotland congregations occupying the City Churches under one roof but with separate sanctuaries. After the post 1841 rebuilding there were three congregations, then two since the 1980s – namely Dundee Parish Church (St Mary’s) and the Steeple Church.

Several past ministers have served as Moderators of the General Assembly of the Church of Scotland, most recently the late Very Reverend Dr William B. R. Macmillan in 1991.

In 1690, following the Glorious Revolution the Church of Scotland permanently switched to Presbyterian Government. The incumbent minister of the Parish of Dundee, Henry Scrymgeour demitted office in 1690 and the charge was declared vacant in 1694. The charge was not filled until 1699.[1]

Since that time the following have served as minister of the charge:[2]