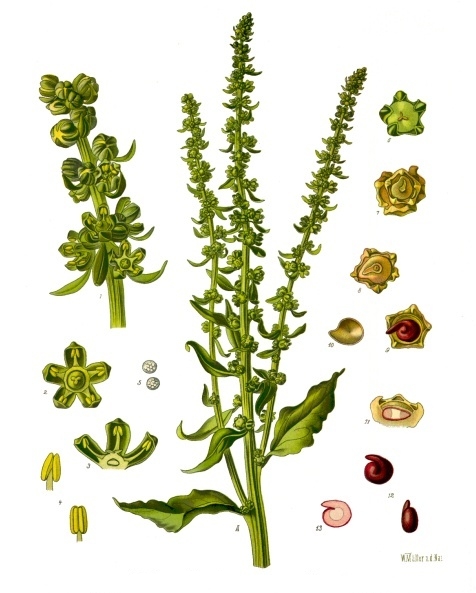 "Beta vulgaris" is a herbaceous biennial or rarely with leafy stems growing to 1-2 m tall. The leaves are heart-shaped, 5-20 cm long on wild plants (often much larger in cultivated plants). The s are produced in dense spikes, each flower very small, 3-5 mm diameter, green or tinged reddish, with five petals; they are wind-pollinated. The is a cluster of hard nutlets.

"Beta vulgaris" roots contain significant amounts of , whilst the leaves are an excellent source of . They are also high in folate, soluble and insoluble dietary fibre and s. It is among the sweetest of vegetables, containing more sugar even than s or . The content of sugar in beetroot is no more than 10%; in the sugar beet it is typically 15 to 20%.

Beetroots are rich in the nutrient betaine. Betaine supplements, manufactured as a by-product of sugar beet processing, are prescribed to lower potentially toxic levels of (Hcy), a homologue of the naturally occurring amino acid , which can be harmful to blood vessels thereby contributing to the development of , , and peripheral vascular disease.

In Africa the whole leaf blades are usually prepared with the midribs as one dish.

The usually deep-red roots of garden beet are eaten boiled either as a cooked vegetable, or cold as a after cooking and adding oil and . A large proportion of the commercial production is processed into boiled and sterilised beets or into pickles. In beet soup, such as , is a popular dish. Yellow-coloured garden beets are grown on a very small scale for home consumption.

Beetroot can be peeled, steamed, and then eaten warm with butter as a delicacy; cooked, pickled, and then eaten cold as a ; or peeled, shredded raw, and then eaten as a salad. Pickled beets are a traditional food of the . It is also common in Australia and New Zealand for pickled beetroot to be consumed on a burger. [ [http://www.weird-food.com/weird-food-vegetable.html Weird Foods from around the World ] ]

One increasingly popular preparationfact|date=September 2008 involves tossing peeled and diced beets with a small amount of oil and seasoning, then roasting in the oven until tender.

A traditional Pennyslvania German (US) dish is Red Beet Eggs. Hard-boiled eggs are refrigerated in the cooking liquid of pickled beets and allowed to marinate until the eggs turn a deep pink-red color.

s, obtained from the roots, are used industrially as red food colourants, e.g. to improve the colour of , sauces, desserts, s and jellies, , sweets and s.

Beet pulp is fed to horses that are in vigorous training or conditioning and to those that may be allergic to dust from hay.fact|date=September 2008

The roots and leaves have medicinal uses.

The Romans used beetroot as a treatment for fevers and , amongst other ailments. in "" gives five s for soups to be given as a , three of which feature the root of beet. [Apicius "De Re Coquinaria" 3.2.1, 3, 4] advocated the use of beet leaves as binding for wounds.

Since Roman times, beetroot juice has been considered an . It is a rich source of the mineral , which plays an important role in the production of human sex hormones. Field Marshal Montgomery is reputed to have exhorted his troops to 'take favours in the beetroot fields', a euphemism for visiting prostitutes. [cite book |url=http://ourworld.compuserve.com/homepages/Stephen_Nottingham/beetroot6.htm |title=Beetroot |author=Stephen Nottingham |format=E-book |year=2004] . From the , beetroot was used as a treatment for a variety of conditions, especially illnesses relating to digestion and the blood. Platina recommended taking beetroot with to nullify the effects of 'garlic-breath'. [Platina "De Honesta Voluptate et Valetudine", 3.14]

Today the beetroot is still championed as a universal panacea. One of the most controversial examples is the official position of the n Health Minister on the treatment of . Dr. , Health Minister under , has been nicknamed 'Dr. Beetroot' for promoting beets and other vegetables over antiretroviral AIDS medicines, which she considers toxic.

Forms with strikingly coloured, large leaves are grown as ornamentals.

Beets are used as a food plant by the larvae of a number of "Lepidoptera" species.

Beets are cultivated for (e.g. ), for sugar (the ), as a ( or "Bull's Blood"), or as a ("beetroot", "table beet", or "garden beet"). Major root vegetable s include:
*"Albina Vereduna", a white variety
*"Burpee's Golden", a beet with orange-red skin and yellow flesh.
*"Chioggia", an open-pollinated variety originally grown in . The concentric rings of its red and white roots are visually striking when sliced. As a heritage variety, Chioggia is largely unimproved and has relatively high concentrations of geosmin.
*"Detroit Dark Red", with relatively low concentrations of geosmin, and is therefore a popular commercial cultivar in the United States.
*"India Beet" is not as sweet as Western beet. However India beet is more nutritious than Western beet.Fact|date=September 2008
*"Lutz Greenleaf", a variety with a red root and green leaves, and a reputation for maintaining its quality well in storage.
*"Red Ace", the principal variety of beet found in the United StatesFact|date=September 2008, typical for its bright red root and red-veined green foliage.

The "earthy" taste of some beetroot cultivars comes from the presence of . Researchers have not yet answered whether beets produce geosmin themselves, or whether it is produced by symbiotic soil microbes living in the plant.

Beets are one of the most -intensive of modern crops, a dependency possibly introduced as an evolutionary response its pre-industrial ancestor's constant exposure to ; on commercial farms, a 60 tonne per hectare (26.8 ton/acre) harvest requires 600 grams of elemental boron per hectare (8.6 ounces/acre) for growth. A lack of boron causes the and the shoot to languish, eventually leading to .

The colour of red/purple beetroot is due to a variety of pigments, unlike most other red plants, such as , which contain pigments. The composition of different betalain pigments can vary, giving breeds of beetroot which are yellow or other colors in addition to the familiar deep red.

Betacyanin in beetroot may cause red in some people who are unable to break it down. This is called .

The pigments are contained in cell s. Beetroot cells are quite unstable and will 'leak' when cut, heated, or when in contact with air or sunlight. This is why red beetroots leave a purple stain. Leaving the skin on when cooking, however, will maintain the integrity of the cells and therefore minimise leakage.

The , the ancestor of modern cultivated beets, prospered along the coast of the . Beetroot remains have been excavated in the Third dynasty pyramid at Thebes, , and four charred beetroot fruits were found in the site of in the . But it is difficult to determine whether these are domesticated or wild forms of "B. vulgaris". Zohary and Hopf note that beetroot is "linguistically well identified." They state the earliest written mention of the beet comes from ; the Greek Peripatetic later describes the beet as similar to the . "Roman and ish literary sources indicate that by the domestic beet was represented in the by leafy forms (chard) and very probably also by beetroot cultivars." [Daniel Zohary and Maria Hopf, "Domestication of plants in the Old World", third edition (Oxford: University Press, 2000), pp. 200f]

Modern s date back to mid- , selected from fodder beets.