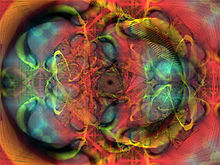 Music visualization, a feature found in electronic music visualizers and media player software, generates animated imagery based on a piece of music. The imagery is usually generated and rendered in real time and synchronized with the music as it is played.

Visualization techniques range from simple ones (e.g., a simulation of an oscilloscope display) to elaborate ones, which often include a plurality of composited effects. The changes in the music's loudness and frequency spectrum are among the properties used as input to the visualization. 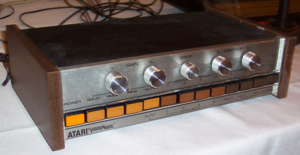 The Atari Video Music. The unit never gained enough popularity and was in production for only a year.

The first electronic music visualizer was the Atari Video Music introduced by Atari Inc. in 1976, and designed by the initiator of the home version of Pong, Robert Brown. The idea was to create a visual exploration that could be implemented into a Hi-Fi stereo system. It is described in US 4081829 .

Music and audio players were available on early home computers, Sound to Light Generator (1985, Infinite Software) used the ZX Spectrum's cassette player for example.[1] The 1984 movie Electric Dreams prominently made use of one, although as a pre-generated effect, rather than calculated in real-time. One of the first modern music visualization programs was the open-source, multi-platform Cthugha (1994). Subsequently, computer music visualisation became widespread in the mid to late 1990s as applications such as Winamp (1997), Audion (1999), and SoundJam (2000). By 1999, there were several dozen freeware non-trivial music visualizers in distribution.

An early "light synthesizer", Psychedelia (1984, Jeff Minter), did not use audio input but was designed to create visualizations in accompaniment to music.