:"Note: "SS Leviathan" was also an early name for the 19th century ship launched as the ".

SS "Leviathan", originally built as the SS "Vaterland", was an ocean liner which regularly sailed the North Atlantic briefly in 1914 and from 1917 to 1934. The second of a trio of transatlantic liners built by Germany's for the passenger service, she would sail as the "Vaterland" for less than a year before her early career was halted by the start of . In 1917, she was seized by the U.S. government and renamed the "Leviathan". She would become known by this name for the majority of her career, both as a troopship during World War I and later as the flagship of the .

"SS Vaterland", a 54,282 gross ton passenger liner, was built by at , , as the second of a trio of very large ships of the "Imperator" class for the Hamburg-America Line's route. She was launched 13 April 1913 and was the largest in the world upon its completion, superseding SS|Imperator and later being superseded by the last ship of this class, SS|Bismarck, the later RMS|Majestic|1914|6.

"Vaterland" had made only a few trips when, in late July 1914, she arrived at just as broke out. With a safe return to Germany rendered virtually impossible by British dominance of the seas, she was laid up at her , terminal and remained immobile for nearly three years.

She was seized by the when the entered World War I, 6 April 1917; turned over to the custody of the in June 1917; and commissioned July 1917 as the USS "Vaterland" [cite web|url=http://www.history.navy.mil/photos/sh-usn/usnsh-l/id1326.htm|title=USN Ships--USS Leviathan (ID # 1326)|accessdate = 2007-01-26] , in command. Redesignated SP-1326 and renamed "Leviathan" by President on 6 September 1917. The trial cruise to on 1917, prompted Captain Oman to order 241 Marines, onboard to relieve a detachment of Devil Dogs, to station themselves conspicuously about the upper decks giving the appearance from shore that the great ship was headed overseas to increase American Expeditionary Forces. [USS Leviathan History Committee, History of the U.S.S. Leviathan, New York, NY, ] Upon her return later that month, she reported for duty with the . In December she took troops to , , but repairs delayed her return to the U.S. until mid-February 1918. A second trip to Liverpool in March was followed by more repairs. At that time she was repainted with the British-type "dazzle" scheme that she carried for the rest of the war. With the completion of that work, "Leviathan" began regular passages between the U.S. and Brest, , delivering up to 14,000 persons on each trip, carrying over 119,000 fighting men, before the armistice 11 November 1918. After that date "Leviathan", repainted grey overall by December 1918, reversed the flow of men as she transported the veterans back to the United States with nine westward crossings ending 8 September 1919. On 29 October 1919, USS "Leviathan" was decommissioned and turned over to the U.S. Shipping Board and again laid up at Hoboken until plans for her future employment could be determined. 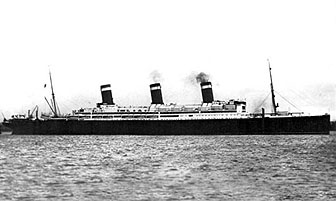 thumb|right|The "Leviathan" was reincarnated as the flagship of the American merchant fleet.

These finally materialized and, in April 1922 the ship steamed to , where she was completely renovated to suit American tastes and post-World War I standards. Her reconditioning completed in June 1923, the Board turned her over to the to operate on their behalf as the U.S. Flag ocean liner "Leviathan".

As SS "Leviathan", she was the "queen" of the United States' merchant fleet, and operated in the trans-Atlantic trade into the early 1930s. Dubbed "Levi Nathan", the ship was reasonably popular, but because of her American registry she had to sail as a "dry ship" under and many American travellers preferred European liners which were permitted to serve liquor once they were in international waters. Despite this handicap, the "Leviathan" in 1927 was the #1 ship on the Atlantic in terms of average passengers carried per crossing. The hit passenger shipping hard and the "Leviathan", like other big liners of the time, began to lose money. She was in 1933 and, with the exception of several months of additional service in 1934, was inactive until 10 December 1937, when she was sold to a British firm and made her final Atlantic crossing to , shortly thereafter, where she was broken up on over the next two years.

* When completed in the spring of 1914 she surpassed her slightly older near-sister, SS|Imperator, as the world's largest ship. "Vaterland" held this honor until 1922, when the last of the three big near-sister German liners, the 56,551 gross ton SS|Bismarck, was delivered after a long delay and almost immediately became the British liner "Majestic".
* No U.S. flag commercial ship approached her size until 1952, when the SS|United States was completed.
* As the USS Leviathan (in troopship service 1917-19) she held the record as the heaviest ship operated by the until after , when new classes of large s were commissioned.
* The SS Leviathan Orchestra recorded some s in the early 1920s, and helped inspire the name for a later band, .
* Director wanted to use the Vaterland/Leviathan as a stand-in for a proposed motion picture extravaganza about the Titanic tragedy. Before Hitchcock could secure use of the ship, her owners sold her instead to the scrapyards in .
* Actor served onboard the Leviathan during his enlistment in the United States Navy.