Master of Reality is the third album by the British heavy metal band Black Sabbath, released in July 1971. It is sometimes noted as the first stoner rock album.[1] Master of Reality was certified double platinum after having sold over 2 million copies.

For the recording of this album, guitarist Tony Iommi, who had injured his fingers in a factory accident years earlier,[2] decided to downtune his guitar down three semi-tones (or one and a half steps to C-sharp). This reduced string tension, thus making the guitar easier for him to play. Geezer Butler also downtuned his bass guitar to match Iommi. The result was a noticeably "darker" or "sludgier" sound that almost two decades later would prove hugely influential on at least three of the biggest grunge acts, namely Smashing Pumpkins, Soundgarden, and Nirvana.

Master of Reality was recorded at Island Studios in London, UK between February and April 1971. The album was produced by Rodger Bain, who had also produced their previous two albums. However, this would be his final collaboration with the band.

The slow and heavy songs that comprise most of the album are interspersed with quiet ballads written by Tony Iommi. Two of these, "Embryo" and "Orchid", are short instrumentals serving as interludes. The third, "Solitude", is much longer in comparison and features Ozzy Osbourne's soft, woeful vocals. It is largely believed by many fans that Bill Ward sang on "Solitude", as the song's vocals greatly differ from Osbourne's "signature" vocals; however, this is a myth. Ward did not perform vocals for any Black Sabbath song until the band's seventh album, Technical Ecstasy, on the track "It's Alright".[3]

The lyrics of the song "After Forever", written by Geezer Butler,[4] a proclaimed Catholic, focus entirely on Christian themes. Although the album jacket credits Tony Iommi alone in the composition of this tune, the Black Sabbath Black Box Set refutes the album jacket credit and gives credit to this song (along with "Orchid" and "Embryo") to all four band members in keeping with their wishes to remain a democratic band. At the time, some viewed Black Sabbath as Satanists (which the band had consistently denied) due to their dark sound, image and lyrics. "After Forever" was released as a single along with "Fairies Wear Boots" in 1971.[5][6] Rolling Stone criticized the album's Christian lyrics but welcomed the arrangement,[7] while Wilson & Alroy's called the guitar sound "crude but effective".[8]

The album opener, "Sweet Leaf", is a song about marijuana. "Children of the Grave" was written about war, peace and revolution. 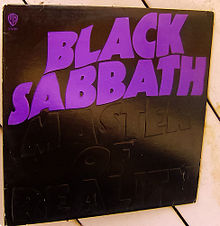 The vinyl release of Master of Reality used black-on-black raised lettering for the album's title.

The album cover reads Master of Reality coloured grey, underneath Black Sabbath coloured purple, against a black background. The words are written in a large font with a ripple effect like that of moving water or a waving flag. The first editions of the album came in an 'envelope sleeve' containing a poster of the band, and with the album's title embossed in black lettering rather than in grey. This was the first Black Sabbath sleeve on which the lyrics were reproduced on the back of the sleeve.

On the first North American editions of the album, several songs had subtitles given to segments, making it appear that there were more songs than there actually were. The intro of "After Forever" was given the title "The Elegy", the outro of "Children of the Grave" was called "The Haunting", the intro of "Lord of This World" was titled "Step Up", and the intro of "Into the Void" called "Deathmask". This treatment had also been used on the North American editions of Black Sabbath's previous two albums. These pressings also incorrectly listed the album title as Masters of Reality. Subsequent editions corrected the album's title and removed three of the four subtitles (all but "The Elegy").

The album broke the top ten in both the United Kingdom (#5)[14] and United States (#8)[15] and achieved Gold status on advance orders alone. Eventually it sold two million copies in the US. However, critical response of the era was generally unfavourable, with Robert Christgau giving the album a C- as well as, in a clearly exasperated tone, calling the album "a dim-witted, amoral exploitation."[11]

Lester Bangs described Master of Reality as "monotonous" in an ambivalent review published in Rolling Stone.[7] However the same magazine would later place the album at number 298 on their 500 Greatest Albums of All Time list, compiled in 2003[16] and in describing the album referred to the band as "the greatest sludge-metal band of them all..."[17] The magazine described the album as "the definitive studio relic of Sabbath's golden-hellfire era (1970-74)..."[18]

Thirty years after the album's release, Q magazine (7/01, p. 86) included it in their 50 Heaviest Albums of All Time and described it as "malevolent...casting Black Sabbath as a Titanic-style house band on the eve of Armageddon, cranking it as the bomb drops." Another edition of Q magazine that year (1/01, p. 122) gave it 5 out of 5 stars, describing it as "the most cohesive record of their first three albums."

Songs from this album have also been covered by a variety of bands.

The song "Solitude" was covered by UK doom metal band Cathedral as a bonus track for the European version of the 1994 Black Sabbath tribute album Nativity in Black, and later by Norwegian group Ulver on their 2007 album Shadows of the Sun.[20] The song has also been covered by death metal band Demented Saint.

"Into the Void" was covered by stoner rock band Kyuss for the split EP Kyuss/Queens of the Stone Age, and by Soundgarden on their EP SatanOscillateMyMetallicSonatas.

The hard rock band Godsmack covered the song "Sweet Leaf" as a bonus track for the Japanese special edition of their 2000 album Awake and for the second volume of the Nativity in Black series.

The riff from "Sweet Leaf" was used as the basis for the Butthole Surfers' song "Sweat Loaf", from the album Locust Abortion Technician. That same riff is referenced near the end of "Give It Away" by the Red Hot Chili Peppers.

"Sweet Leaf" has also been covered by American metal band Ugly Kid Joe on their first release, As Ugly as They Wanna Be, and Baltimore hardcore band Next Step Up on their 1995 album, Fall From Grace.

Estonian band Rondellus, in their tribute album Sabbatum, covered the songs "After Forever" and "Solitude" in Medieval style with lyrics translated into Latin. "After Forever" is retitled "Post Aeternitatem" (literally, "After Eternity"), and is sung by a choir of male voices. "Solitude" is sung by male and female voices, accompanied by positive organ.

Exhorder covered the song "Into The Void" on their album The Law released in 1992.

Mountain Goats leader John Darnielle wrote a short novel for the 33⅓ book series with this album as a central theme. The book is written in the form of a diary of a young man who has been committed to a mental health treatment facility, and how the teen relates to the world through the songs on the album.[22]

The song "Solitude" was featured as the leitmotif for main character, Zombie, in the 1991 motion picture Zombie ja Kummitusjuna (Zombie and The Ghost Train) by Finnish director Mika Kaurismäki.[23]

Rick Rubin sampled the guitar riff for Sweet Leaf in his production for the Beastie Boys' 1986 song "Rhymin' and Stealin'".[24]

The track Into The Void was featured at the beginning of episode 23 (Hog Heaven) of the ninth season of the TV show CSI: Crime Scene Investigation.

Note that, while the overall timing of "Deathmask/Into the Void" is approximately correct, the apportioning of time of "Deathmask" to "Into the Void" may be arbitrary, as the 3:08 mark of the song falls during "Into the Void"'s middle-8 vocal ("Freedom fighters sent off to the sun ..."). The revised US pressing timings, shown below, compound this likely error.

US-made compact disc pressings of Master of Reality continue to list the incorrect timings of the Revised US LP pressing on the CD booklet.[25] The songs are not indexed on the CD using those timings, however, with breaks between songs properly placed.