Daniel Anthony William "Danny" Graham (born 12 August 1985) is an English footballer who plays for Premier League side Swansea City as a striker. He started his professional career at Middlesbrough in 2003, making his debut for the club in a Premier League match against Manchester United the following year. He later represented England at under-20 level.

During his four years at Middlesbrough, Graham made just one first team start. He was loaned out to clubs in all three divisions of the Football League, before joining his final loan club Carlisle United on a two-year deal in 2007. At the end of his contract, he joined Championship side Watford, who were subsequently ordered to pay compensation. Graham was Watford's top-scorer in both of his seasons at Vicarage Road, as well as Watford F.C. Player of the Season and the Championship's overall top scorer in 2010–11. In July 2011, Graham transferred to newly-promoted Swansea City for £3.5 million.

Graham attended Heworth Grange Comprehensive School, and represented the Gateshead Schools FA team.[1] He started his career at Chester-le-Street Town, in the Northern League, before joining Middlesbrough on a permanent transfer in 2003. In the 2003–04 season he spent time on loan at Division Three side Darlington, where he made scored two goals in nine league appearances. He made his Middlesbrough debut on 3 October 2004, as a late substitute in a 1–1 Premier League draw against Manchester United. He scored his first goal for the club three weeks later, against Coventry City in the League Cup,[2] and scored his first Premier League goal on 27 February 2005 against Charlton Athletic.[3]

Despite having played for Middlesbrough in both the Premier League and UEFA Cup, Graham was unable to secure a place in the starting lineup; his only league start for the club came in a 1–0 defeat to Fulham at the end of the 2005–06 season.[4] In July 2006, Middlesbrough confirmed they were willing to let the once-hot prospect leave the club.

The following season, Graham was loaned to Derby County and Leeds United, but did not score a league goal for either club. Graham subsequently went on loan to Blackpool at the start of the 2006–07 season, scoring once in the league against Bristol City.[4][5]

At the end of 2006, Graham moved to Carlisle United on loan.[6] He returned to Middlesbrough on 5 February 2007, after playing only two games due to a leg injury,[7] but returned to Brunton Park after recovering to complete a three-month loan.[8] The final match of his loan was against Bristol City, where he scored Carlisle's only goal in a 3–1 defeat. During two loan spells at Carlisle, he scored 7 league goals in 11 games.[4]

Graham started the 2007–08 season in good form, and was the division's top goalscorer from August until October, including one against his former loan-club Leeds United. However after his goal on 13 October 2007, Graham did not score again until 2 February 2008. He made his 100th career appearance playing for Carlisle United against Nottingham Forest at the City Ground on 3 March 2008, scoring the winning goal in a 1–0 victory, in a game broadcast live on Sky Sports.[11]

Graham also started the 2008–09 season in goalscoring form, netting 13 goals between August and December. He was linked with a £250,000 move to either Preston or Huddersfield, but these rumours ultimately came to nothing. 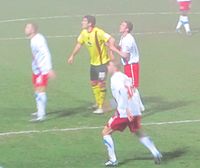 After several failed attempts by Carlisle to renew Graham's contract he joined Watford on a two-year contract on 2 July 2009. A tribunal later decided that Watford should pay an initial £200,000 in compensation to Carlisle, which eventually rose to £350,000. Graham scored several goals for Watford in pre-season, and scored on his competitive debut for the club in a 1–1 draw with Doncaster Rovers at Vicarage Road.[12] On 5 April 2010 Graham scored from 25 yards out to give Watford the lead in their 1–1 draw with West Bromwich Albion.[13] Graham finished the season as Watford's top scorer, with 14 league goals.[14]

On 15 January 2011 against Derby County, Graham equalled the Watford record for the most goals scored in consecutive games, finding the net for the seventh successive match.[15] Graham sustained his good goal-scoring form, finishing as Championship top-scorer for the 2010–11 season, with 24 goals in the league.[16] He was named in the 2011 PFA Championship Team of the Year,[17] and was also voted Watford F.C. Player of the Season.[18]