Modern dance in the United States

Modern dance in the United States 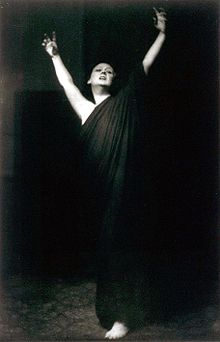 Closely related to the development of American music in the early 20th century was the emergence of a new, and distinctively American, art form -- modern dance. Among the early innovators was Isadora Duncan (1878–1927), who stressed pure, unstructured movement in lieu of the positions of classical ballet. Duncan said "from early childhood I have considered the freedom of my body essential to rhythm of movement"[1]. Her emphasis on the natural world and body in the context of concert dance influenced the ideals of the modern dancers who succeed her in America.

The main line of development, however, runs from the dance company of Ruth St. Denis (1878–1968) and her husband-partner, Ted Shawn (1891–1972), which produced work exploring images from other countries that were considered exotic by American audiences[2]. St. Denis' pupil Doris Humphrey (1895–1958) looked outward for inspiration, to society and human conflict. Another pupil of St. Denis, Martha Graham (1893–1991), whose New York-based company became perhaps the best known in modern dance, sought to express an inward-based passion. Many of Graham's most popular works were produced in collaboration with leading American composers -- "Appalachian Spring" with Aaron Copland, for example.

A significant contributing factor to the development and spread of Modern Dance in the United States in the 20th century was the establishment of Bennington College's Summer School of Dance. The program was established in 1934 and led by dancer/educator Martha Hill[3]. Students attended classes in dance techniques, dance composition, music for dance, teaching methods, production, dance history and critical theory[4]. The school's faculty included established dancers and choreographers such as Martha Graham, Hanya Holm, Charles Weidman and Doris Humphrey[5], many of whom had received their training from European Modern and Expressionist dancers. The Bennington School let American Modern dancers assemble to develop a dance genre of their own identity, while at the same time established a model for University-level education programs in dance in the United States[6]. With clear pioneers, pupils and principles, Modern Dance began to emerge as a distinctly American art form to be taught and developed throughout the country and continent.

Later choreographers searched for new methods of dance composition. Merce Cunningham (1919–2009) introduced chance procedures and composition by field. Alvin Ailey (1931–1989) incorporated African dance elements and black music into his works. Recently such choreographers as Mark Morris (1956- ) and Liz Lerman (1947-) have defied the convention that dancers must be thin and young. Their belief, put into action in their hiring practices and performances, is that graceful, exciting movement is not restricted by age or body type.