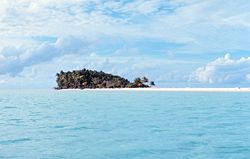 A desert island in Palau.

A desert island or uninhabited island is an island that has yet to be (or is not currently) populated by humans. Uninhabited islands are often used in movies or stories about shipwrecked people, and are also used as stereotypes for the idea of "paradise". Some uninhabited islands are protected as nature reserves and some are privately owned. Devon Island in Canada is claimed to be the largest uninhabited island in the world. Pirates were known to bury stashes of rum on random islands, in case they were left there to die by their mutinous mates.

Small coral atolls or islands usually have no source of fresh water, but at times a fresh water lens (Ghyben-Herzberg lens) can be reached with a well.

One of the uninhabited islands in Lakshadweep

In the phrase "desert island," the adjective "desert" connotes a "desolate and sparsely occupied or unoccupied" area and does not imply that the island was previously inhabited and later deserted.[1] The term "desert island" therefore typically refers to an undiscovered island.[2]

William Shakespeare's 1610-11 play, The Tempest, uses the idea of being stranded on a desert island as a pretext for the action of the play. Prospero and his daughter Miranda are set adrift by Prospero's treacherous brother Antonio, seeking to become Duke of Milan, and Prospero in turn shipwrecks his brother and other men of sin onto the island.

A Latin translation of Ibn Tufail's Philosophus Autodidactus appeared in 1671, prepared by Edward Pococke the Younger,[5][verification needed] followed by an English translation by Simon Ockley in 1708,[6] as well as German and Dutch translations.[7] In the late 17th century, Philosophus Autodidactus inspired Robert Boyle, an acquaintance of Pococke, to write his own philosophical novel set on a deserted island, The Aspiring Naturalist.[8] Ibn al-Nafis' Theologus Autodidactus was also eventually translated into English in the early 20th century.

The quintessential deserted island novel, however, was Daniel Defoe's 1719 novel Robinson Crusoe. It is likely that Defoe took inspiration for Crusoe from a Scottish sailor named Alexander Selkirk, who was rescued in 1709 after four years on the uninhabited Juan Fernández Islands; Defoe usually made use of current events for his plots. It is also likely that he was inspired by the Latin or English translations of Ibn Tufail's Philosophus Autodidactus.[5][7][9][10]

Tom Neale was a New Zealander who voluntarily spent 16 years in three sessions in the 1950s and 1960s living alone on the island of Suwarrow in the northern Cook Islands group. His time there is documented in his autobiography, An Island To Oneself. Significant novels set on deserted islands include The Swiss Family Robinson, The Coral Island, The Mysterious Island, Lord of the Flies, The Cay and The Beach.

The theme of being stranded on a desert island has inspired films, such as Cast Away, and TV series, like Lost and the comedy Gilligan's Island. It is also the driving force behind reality shows like Survivor and the Discovery Kids show Flight 29 Down.

In the popular conception, such islands are often located in the Pacific, tropical, uninhabited and usually uncharted. They are remote locales that offer escape and force people marooned or stranded as castaways to become self-sufficient and essentially create a new society. This society can either be utopian, based on an ingenious re-creation of society's comforts (as in Swiss Family Robinson and, in a humorous form, Gilligan's Island) or a regression into savagery (the major theme of both Lord of the Flies and The Beach). In reality, small coral atolls or islands usually have no source of fresh water (thus precluding any long-term human survival), but at times a fresh water lens (Ghyben-Herzberg lens) can be reached with a well.

One report describes a Frenchman who went mad after two years of solitude on Mauritius. He tore his clothing to pieces in a fit of madness brought on by a diet of nothing but raw turtles. Another story has to do with a Dutch seaman who was left alone on the island of Saint Helena as punishment. He fell into such despair that he disinterred the body of a buried comrade and set out to sea in the coffin. Another castaway, the Spaniard Pedro Serrano, was rescued after seven and a half years of solitude. In 1820, the crew of the whaleship, Essex, spent time on uninhabited Henderson Island where they gorged on birds, fish, and vegetation and found a small freshwater spring. After they depleted the island's resources most of the crew left on three whaleboats, while three of the men decided to remain on the island and ended up living there.[citation needed]