Countess Palatine Maria Anna of Neuburg (Spanish: Mariana de Neoburgo; German: Maria Anna von Neuburg) (28 October 1667 – 16 July 1740) was Queen consort of Spain from 1689 to 1700 as the second wife of King Charles II. She was known as Mariana in her adopted Spain. She was the aunt of Elisabeth Farnese.

Born in Benrath Palace in Düsseldorf, she was the twelfth child of Philip William, Elector of the Palatinate, and Elisabeth Amalie of Hesse-Darmstadt.

She spent her childhood in the castle of Neuburg, where she was raised by a German governess, Frau von Klau, together with her sisters Maria Sophia, Dorothea Sophia - to whom she was very close - and Hedwig Elizabeth. Her family affectionately called her Mariandl. Since an early age, she was physically attractive: tall, thin, red-haired and with a fair complexion. However, she was also known for being haughty, vain, authoritarian and selfish.

Marie Louise of Orléans, the first wife of Charles II of Spain, had died childless on 12 February 1689. Maria Anna was chosen out of the many candidates to become his second wife because her ancestors had been very fertile - her parents had had 23 children -. In addition, her eldest sister Eleonore was married to Emperor Leopold I so Spain's ties with the Austrian branch of the Habsburgs would become even stronger. 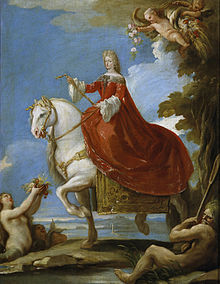 The marriage by proxy took place on 28 August 1689 in Ingolstadt, Germany with the attendance of her brother-in-law Emperor Leopold and her sister Empress Eleonore among other illustrious guests. However, it took Maria Anna several months to arrive in Spain, which didn't happen until the spring of 1690. She married Charles in person on 14 May 1690 in San Diego, near Valladolid. Nevertheless, this marriage also remained childless, in all probability not because she was infertile herself but because of the king's health problems.

During her time as queen, Maria Anna dominated her husband through her bursts of anger and her imaginary pregnancies. In addition, she was actively involved in several intrigues in the Spanish court, including her husband's exorcisms, and wanted Archduke Charles of Austria, her nephew and Charles's relative, to succeed to the Spanish thrones. Needless to say, she was in very bad terms with her mother-in-law, Maria Anna of Austria, the Queen Mother, who wished that the crowns would devolve upon her great-grandson, Joseph Ferdinand of Bavaria.

Most people at the Spanish court hated Maria Anna, in part, because she used to do everything in order to get as much money as she could for her Palatine family and for herself, even stealing precious paintings from the royal collections of art and sending them to her German relatives. Nevertheless, the economy of the kingdom was far from good and even Maria Anna had to make some economic sacrifices at times. For instance, once she was forced to pawn her own jewels in order to cover some expenses because her husband had no money at the time. She complained about this to her family writing that her sisters had had a better dowry than her. Her anger was even greater after hearing that her predecessor, Marie Louise of Orleans, had brought magnificent jewels with her when she married Charles. Her mother, Elizabeth Amalia, wrote about this subject:

It is not true that the Queen had a smaller dowry than her sisters. Neither the Empress, nor the Queen of Portugal nor the Princess of Poland received more than her. Of course she cannot compare herself to the daughter of the Duke of Orleans, who is the brother of the wealthiest monarch in the world; but, on the other hand, I think it's a shame that she had to pawn her jewels in order to cover her husband's expenses. 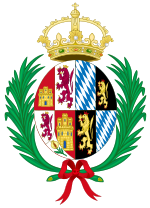 Coat of arms of Maria Anna as Queen of Spain.

Coat of arms of Maria Anna as Queen Dowager of Spain.

Her husband died on 1 November 1700 in Madrid and in his will he stated that his widow should be given a good allowance each year as well as treated with respect by his successor. However, the new king, Philip V, ordered Maria Anna to leave Madrid before making his entrance into the capital. The queen had no choice but to settle in the nearby city of Toledo, where she lived in the old and dark Alcazar. She sent some letters to her family in Germany, asking for their help. In early 1701, her eldest brother, John William, Elector of the Palatinate, wrote to Empress Eleonore the following letter:

As for the Queen of Spain, I sincerely feel sorry for that poor unfortunate lady; but, to tell the truth, everything that she's going through is her own fault because of her bad behaviour, and I think that what she asks Your Majesty for is more illusory than realistic. But if you could help that poor woman and comfort her in her distressing situation, it would be also a great favour for me...

Nevertheless, Maria Anna had to resign herself to stay in the old Alcazar of Toledo, where her situation continued to be quite difficult. In the fall of 1704, the queen wrote to her mother complaining in the following terms: "I am completely abandoned, they don't give me my allowance or, at least, just the third part... so I seldom have any servants, nor am I allowed to have them because there's no money to pay them, and sometimes I don't even have much food... I am so miserable that I cannot trust anyone and I'm afraid everyone will abandon me."

Two years later, in 1706, her destiny changed when her nephew, Archduke Charles of Austria, occupied the city of Toledo with the imperial army. Naturally Maria Anna was very pleased and welcomed them, something that made King Philip V to expel her from Spain a few years later. She settled in Bayonne, France, where she lived during the next few decades, forgotten by everyone. Her confessor was the Spanish priest and composer Sebastián Durón, who officiated at her scandalous marriage to the young son of a barrel maker.

In 1739, being old and sick, she was finally allowed to return to Spain. She settled in the Infantado Palace in Guadalajara, Spain, where she died on 16 July 1740. She was buried in El Escorial Monastery.

Media related to Maria Anna of Neuburg at Wikimedia Commons

http://historicalartmedals.com/MEDAL%20WEB%20ENTRIES/SPAIN-MEXICO/CHARLES%20II%20AND%20MARIA%20ANNA-BW380%20HIGH.htm Medal of Maria Anna and Charles II from Collection of Benjamin Weiss