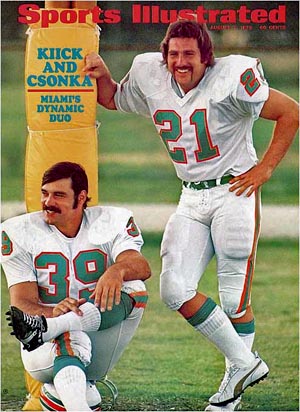 James Forrest Kiick (born , in Lincoln Park, ) was an American collegiate and professional football . He is best known for playing halfback for the in the (AFL) from 1968 to 1969 and in the (NFL) from 1970 through 1974, including the legendary undefeated 1972 team, and was an integral part of the ball-control running game which characterized the Dolphins under head coach in the early 1970s. He played in three s. He is the Dolphins' fourth all-time leading rusher. [ [http://www.miamidolphins.com/history/individualrecords/rushing.asp Miami Dolphins website] , accessed on 10-15-06] He and Dolphins fullback were known as "Butch Cassidy and the Sundance Kid," in 1973 co-wrote a book, "Always on the Run", and in 1974 shocked the sports world when they signed with the .

Kiick grew up in . (His father, , had been a running back for the in 1940 and 1945.) A natural athlete, he played football, baseball, and basketball at . [ [http://www.databasefootball.com/players/playerpage.htm?ilkid=KIICKJIM01 Jim Kiick] , database Football. Accessed , .] [Larry Csonka and Jim Kiick, with Dave Anderson, "Always on the Run," pp.78-83. Random House, 1973 OCLC|632348] He made All-Morris County, but as a defensive back, not as a running back.

Kiick played college football at the from 1965 through 1967, and was Wyoming's leading rusher each of those years. He totalled 1,714 yards and ten touchdowns on 431 carries, and 561 yards and five touchdowns on 52 pass receptions. He was the first player ever to earn first-team All-Western Athletic Conference honors three times. He was co-captain of the team as a senior. He was named The Most Valuable Player in the 1966 versus Florida State University (FSU), rushing 25 times for 135 yards and two touchdowns, and catching four passes for 42 yards. He also played in the 1968 versus Louisiana State University (LSU), rushing 19 times for 75 yards and a touchdown, and catching five passes for 48 yards. Kiick played in the , and was selected to play in the 1968 . Kiick met Csonka at the College All-Stars training camp. (In a foreshadowing of things to come, they went out drinking every night.) Although Csonka would be named the All-Star’s Most Valuable Player, Kiick never got into the game. He showed up at the All-Star’s training camp out of shape, and the All-Star’s coach, ex- (NFL) , decided he had a bad attitude and benched him. ["Always on the Run", pp.131-132]

Kiick was drafted by the 's in the 1968 . He was the 7th player taken in the 5th round, the 118th player taken overall. Director of Player Personnel Joe Thomas said Kiick was drafted for his "quick feet." [Dave Hyde, "Still Perfect! The Untold Story of the 1972 Miami Dolphins," p94. Dolphins/Curtis Publishing, 2002 ISBN 0-9702677-1-1] He signed a two-year no-cut contract for $15,000 the first year, $17,000 the second year, plus a $7,000 bonus. ["Always on the Run", p.185] He was the primary halfback for the next four years, and missed only one game in that period. Beginning with the 1972 season he had to share halfback duties with other players, most notably , as Shula decided a faster back would better complement Csonka. Kiick started only three of 14 regular season games in 1972 as he became primarily a short-yardage and goal-line specialist, although he did start at the end of the season.

Although not blessed with breakaway speed, the 5 ft 11 in, 214lb Kiick was a versatile player who in addition to being an effective inside power runner was also an excellent blocker and clutch pass receiver. He had over 1,000 yards combined rushing and receiving in each of his first four years. He was often compared to such well-known all-purpose backs as , , and his boyhood idol, . Teammate described him as "a very heady runner and receiver." [Danny Peary, ed., "Super Bowl: The Game of Their Lives", p118. Macmillan, 1997 ISBN 0-02-860841-0] He played hurt and rarely fumbled. Kiick once played with a broken toe, a broken finger, a hip pointer and a badly bruised elbow. [Underwood, John, "The Blood and Thunder Boys," "Sports Illustrated", August 7, 1972] He led the Dolphins in rushing in 1968 (621 yards) and 1969 (575 yards) and was selected for the AFL All-Star game both years. His nine rushing touchdowns in 1969 led the AFL, and his 1,155 total yards from scrimmage in 1970 ranked fifth in the NFL. In 1971, he had his best year as a runner, rushing for 738 yards and 3 s. He was the only player to rank in the top 15 in both receptions and rushing yardage in both 1970 and 1971. He led the Dolphins in receiving in 1970 and was second in 1968 and 1971.

::"Jim Kiick...loved the game and loved clutch situations--where he was at his best. When we needed a first down on third-and-4 or 5, he'd get it. We might get the ball to him on a short option because there was no one better coming out of the backfield to catch a pass. I've never seen anyone put moves on like him. He'd get a linebacker to lean one way and then go the opposite way. Even when they'd double team, he'd get open." [Peary, "Super Bowl: The Game of Their Lives", pp.101-102.]

Kiick negotiated a one-year $32,000 contract during the 1970 training camp after initially being offerred $20,000. Kiick and Csonka didn’t report to training camp in 1971 during contract negotiations. The Dolphins were offering each player less than $40,000 a year. After two weeks of negotiations, they ended up signing three-year contracts for about $60,000 a year, ["Always on the Run", pp.185-193] which was commensurate with what the other stars on the team, such as , and , were being paid. (They were also fined $2,800 apiece.)

In the longest game in NFL history, the 27-24 double-overtime victory over the in the 1971 AFC playoffs, Kiick rushed 15 times for 56 yards and scored a touchdown. In the 1972 AFC playoff game against the , he rushed 14 times for 50 yards and scored the decisive touchdown. In the 1972 AFC championship game against the , he rushed only eight times for 15 yards, but those 15 yards produced two touchdowns, including the decisive one.

Kiick played in s VI, VII, and VIII. In , he rushed 10 times for 40 yards, and caught three passes for 21 yards, but the Dolphins failed to score a touchdown and were trounced by the , 24 to 3. In , he caught two passes for six yards, and rushed 12 times for 38 yards, scoring the decisive touchdown, a one-yard blast, as Miami defeated the 14 to 7, completing their perfect 17-0 season. In he rushed seven times for 10 yards and scored the second of Miami's three touchdowns, diving in headfirst from the one yard line (his only touchdown of the 1973 season). It was, said Kiick, "my specialty--the one-yard gallop." [Shelby Strother, "Playing to Perfection," "The Super Bowl: Celebrating a Quarter-Century of America's Greatest Game". Simon and Schuster, 1990 ISBN 0-671-72798-2] Miami dominated the , 24 to 7.

Kiick and Csonka were roommates at training camp and on the road. Their hell-raising typically included consuming large quantities of adult beverages. In 1969 sportswriter Bill Braucher of the , upon hearing of their exploits on and off the field, dubbed them “Butch Cassidy and the Sundance Kid” (Kiick was Butch, Csonka was Sundance). ["Always on the Run," p.7] A TV film was made of their exploits, showing them riding horseback into the sunset on Miami Beach. They even posed for a poster dressed in western garb.

The August 7, 1972 issue of featured a profile of Kiick and Csonka. This issue has become a collector's item because of the cover photograph of Kiick and Csonka by famed Sports Illustrated photographer , with Csonka making an obscene gesture with the middle finger of his right hand. Kiick was such a celebrity in South Florida by the summer of 1972 that a petty criminal who bore a passing resemblance to Kiick was able to rent a luxury home on Key Biscayne, make public appearances, and get engaged, passing himself off as Kiick, before being caught. [Hyde, "Still Perfect!", pp.47-51.]

In 1973, Kiick and Csonka, in collaboration with sportswriter , published a book, "Always on the Run". (A second edition, with an additional chapter covering the 1973 season, Super Bowl VIII, and their signing with the was published in 1974.) Kiick and Csonka discuss their childhoods, their college football careers, their sometimes stormy relationship with Don Shula, their experiences as pro football players, and the sometimes outrageous behavior of their teammates. There is an extensive discussion of how Kiick lost his starting role to Mercury Morris at the 1972 training camp. The book provides insight into the history of the Dolphins and the state of pro football in the late Sixties and early and mid Seventies. The book was excerpted in the September 1973 issue of "Esquire" magazine, with Kiick and Csonka on the cover of the magazine, dressed as Old-West dandies.

In 1975, Kiick and teammates Csonka and Warfield played for the of the . Kiick had wanted out of Miami ever since he lost his starting role. [Hyde, "Still Perfect!", p. 273] The March, 1974 press conference announcing what was then the richest 3-player deal in sports was national news and shocked the sports world. The Miami Trio had signed three-year guaranteed contracts beginning in 1975 with a total value, including perks, of $3.5 million. Csonka's salary was $1.4 million, Warfield's $900,000, Kiick's $700,000. Each player would also receive a luxury car every year and a three-bedroom luxury apartment. [Hyde, "Still Perfect!", p.273.]

In October, 1975, twelve games into an eighteen-game schedule, the league failed. The Southmen finished 7-4, in second place in the Eastern Division behind the 9-3 Birmingham Vulcans. Kiick led the team in touchdowns (10), action points (5), and points scored (75). He finished second on the team in rushing, with 121 carries for 462 yards and nine touchdowns, and tied for second with Warfield in receiving, with 25 catches for 259 yards and one touchdown.

Following his brief, disappointing, but lucrative detour to the WFL, Kiick played 17 games in a back-up role for the in 1976 and 1977, rushing 32 times for 115 yards and one touchdown, and catching 12 passes for 92 yards and a touchdown. He was released during the 1977 regular season and missed out on the Broncos' appearance in Super Bowl XII (the Broncos lost). (On the same day Kiick was released by the Broncos, his house burned down and he got divorced.) [Hyde, "Still Perfect!", pp.292-293.] He played for the for one game of the 1977 season, and then retired.

Not counting his WFL games, Kiick ended his career with 1,029 rushing attempts for 3,759 yards and 29 touchdowns, and 233 pass receptions for 2,302 yards and four touchdowns. He fumbled only 15 times. He also completed two passes for 38 yards, and ran back a kickoff for 28 yards.

Kiick has worked as a private investigator for the Broward County Public Defenders Office, [Hyde, "Still Perfect!", p. 293] and has been President of Kiick Sports Promotions in Ft. Lauderdale, FL. [ [http://www.miamidolphins.com/history/1972perfectseason/1972wherearetheynow/1972wherearetheynow.asp Miami Dolphins website] , accessed on 10-15-06]

He was named to the University of Wyoming's Sports Hall of Fame as part of the Class of 1996.