See Decima Flottiglia MAS for Italian frogmen during and before WWII.

Italy was the first nation to use frogmen and human torpedoes. The Italian Naval Assault Divisions are considered to be the precursors to modern Naval Special Forces. Their record can be traced back to World War I and the operation against the Austrian-Hungarian Battleship Viribus Unitis in Pola Harbour in 1918. Other famous operations are Trieste, Suda Bay, Alexandria, Gibraltar, and Malta. Great Britain and Germany soon followed. Italy's frogman group originated in 1938 as the 1a Flottiglia Mezzi d'Assalto (1st Flotilla Assault Vehicles), which was reformed in 1940 as the Decima Flottiglia MAS (10th Flotilla Assault Vehicles, X MAS).

It is a matter of pride that Italy's Naval Special Forces pre-date both the U.S. Navy Underwater Demolition Teams, formed in 1943 and forerunners of the better-known U.S. Navy SEALs, and the British Royal Marines Special Boat Service formed as an offshoot of the Special Air Service in 1941.

After World War II ended, the victors forbade Italy from maintaining special operations personnel. The Decima Flottiglia MAS was disbanded. But the training experience gathered during the war was not lost, but was preserved in units scattered across the new Marina Militare. 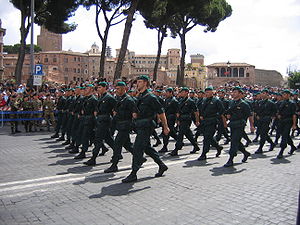 COMSUBIN is currently based in three detachments near the Gulf of La Spezia in the Liguria region of north-west Italy. In keeping with its traditions, the command has long been known for its acquisition and use of unconventional weapons and small arms, such as the Armalite AR-10.

Some nations including Italy have continued to make and keep human torpedoes after 1945.

Though technically referred to as a special operations force, COMSUBIN is somewhat different in that it considers itself a naval specialisation. Perhaps the most storied task of COMSUBIN is the destruction of enemy naval assets, particularly by sea. However, COMSUBIN's six principal components (described below) all perform markedly different tasks each as essential as the other.

The Operational Raider Group (Gruppo Operativo Incursori) is a unit of some 150-200 men and may be considered the force most closely associated with naval special operations by the popular imagination. The Raiders have four specific assignments that they are expected to complete; including:

The Operational Divers Group (Gruppo Operativo Subacquei) has 200 or so personnel specialised in free-diving with air to 60 m, oxygen to 12 m, nitrox to 54 m, heliox to 150 m, and to 300 m with a mini-submarine or a special suit. Their task after World War II was de-mining most of Italy's northern ports ravaged by years of war and full of magnetic mines and dangerous explosives and sunken ships. This they largely accomplished by 1949, letting Italy's economy get back on track relatively quickly. After WWII, they have performed de-mining operations across the world, especially in the Persian Gulf, the former Yugoslavia, and Albania. A detachment of them operates off an Italian Navy minesweeper. Also, they specialise in rescuing navy personnel from stricken submarines.

The Special Naval Group (Gruppo Navale Speciale) supports and moves the Raiders and the Divers, with the aid of five specialist ships: the PROTEO, ANTEO, CAVEZZALE, MARINO, and PEDRETTI.

The School Group (Gruppo Scuole) is the Diver School and the Raider School and trains all raiders and divers, and trains non-COMSUBIN personnel in special tasks such as Diver Obstacle Demolition for San Marco Regiment members (the Italian Navy's Marine Regiment), and divers for other Italian State bodies such as the Police and Firefighting forces.

The crucial Logistics Group (Gruppo Logistico) is responsible for maintenance operations of all kinds and for the health and well-being of all COMSUBIN members.

COMSUBIN (Comando Subacquei Incursori) is first and foremost a secret special operations unit. Its membership is a fairly well-guarded secret. Estimates put the number of active COMSUBIN men at around 700.

Raiders are composed of volunteer officers and non-commissioned officers with an average age of 29 who are capable of:-

After a member has qualified as a Raider, he may take up a number of specialisations including:

Former COMSUBIN Raiders may join other branches of the elite unit to continue serving the Navy or may join other parts of the military as instructors.

COMSUBIN Raiders have been deployed to these places:-

The Italian Government has never acknowledged their participation in deep-penetration sabotage missions.