The Clan MacLea is a Highland Scottish clan, which was traditionally located in the district of Lorn in Argyll, Scotland,[5] and is seated on the Isle of Lismore. There is a tradition of some MacLeas Anglicising their names to Livingstone, thus the Clan Livingstone Society's website also refers to clan as the Highland Livingstones.[5] The current chief of Clan MacLea was recognised by Lord Lyon as the "Coarb of Saint Moluag" and the "Hereditable Keeper of the Great Staff of Saint Moluag."

Origin of the names MacLea and Livingstone

There are conflicting theories of the etymology of MacLea, MacLay and similar surnames, and they could have multiple origins. The name may be an Anglicisation of Mac an Léigh (Scottish Gaelic), meaning son of the physician.[6] The leading theory today, however, is that the name is derived from the patronymic Mac Dhunnshleibhe, meaning son of Donn Sléibhe (son of + the brown haired, or chieftain + of the mountain).[6] In 1910 Niall Campbell, 10th Duke of Argyll maintained that the surname MacLea evolved from the name Maconlea, which was originally Mac Dhunnshleibhe. By the eighteenth century the standard form of the name had become MacLea or other forms with similar spellings (MacLeay, McClay, etc.).

The surname Livingstone/Livingston is a habitual name derived from Levingston (Middle English), which is located in West Lothian, Scotland. Levingston was named after Leving who appears in the early twelfth century in the charters of David I of Scotland.[6][7] This Leving was the progenitor of the powerful aristocratic Livingston family. There are multiple theories of the origin of Leving (Anglo-Saxon, Fleming, Frank, Norman, and even Hungarian).

In the mid seventeenth century James Livingston of Skirling, who was of a branch of these Lowland Livingstons, was granted a nineteen year lease of the Bishoprics of Argyll and the Isles.[8] Sometime before 1648, James Livingston seems to have stayed at Achanduin Castle on Lismore, and it is thought that around this time that the surname Livingstone would have been adopted by MacLeas on the island.[8]

The Duke of Argyll wrote that it was possible that the eponymic progenitor of all the Mac(Duns)leves, (MacLeas, highland Livingstones, etc.), of Lismore may be Dunshleibe son of Aedh Alain O'Neill.[8] Aed Alain was the son of the Irish prince Anrothan O'Neill, who traditionally is said to have married a Princess of Dál Riata, inheriting her lands of Cowal and Knapdale. Anrothan in turn was a son of Aodh O'Neill, King of Ailech (r.1030-1033).[8] From him the family would ultimately descend from Niall of the Nine Hostages, High King of Ireland, who reigned in the fifth century, although the O'Neill dynasty actually take their name from his descendant Niall Glúndub, a High King of Ireland living five centuries later. Dunshleibe is also thought to have been the common ancestor of clans in western Argyll including the Lamonts, the MacEwens of Otter, the Maclachlans, the MacNeils of Barra, and the MacSweens.[8]

An alternative theory is that the Coarbs of Saint Moluag were closely related to the rigdamnai or Royal Family of Ulster and that the use of the name Mac Duinnshleibhe was a proud reminder and declaration of that fact. see [1]

“ So for instance when after 1137 the Dál Fiatach kingship was confined to the descendants of Donn Sleibe Mac Eochada (slain in 1091), the rigdamnai set themselves apart from the rest of the family by using the name Mac Duinnshleibhe (Donleavy)." Francis John Byrne, Irish Kings and High-Kings page 128.

In Irish Pedigrees – The Stem of the Dunlevy family, Princes of Ulidia, O'Hart says

“Tuirmach Teamrach, the 81st Monarch of Ireland had a son named Fiach Fearmara, who was ancestor of the Kings of Argyle and Dalriada, in Scotland: this Fiach was also the ancestor of MacDunshleibe and O’Dunsleibhe, anglicised Dunlevy, Dunlief, Dunlop, Levingstone and Livingstone. …

According to Dr O’Donovan descendants of this family (Cu-Uladh the son the last MacDunshleibe King of Ulidia), soon after the English invasion of Ireland, passed into Scotland, where they changed their name.”

In 2003 a DNA project was established to compare the Y-DNA of males bearing the different variations of the surnames Livingstone and MacLea. The project aims to find a blood link between the so called Highland Livingstones and the Lowland Livingstons, and to investigate the various origins of these surnames.[9] Many male lines have been identified, including those of Dr Livingstone, a clan member, and the chiefly line of Barons of Bachuil. Considering the above mentioned theories about the possible origin of the clan in Ireland, it is relevant to report that the clan seems to have no male line with the DNA signature associated with Uí Néill families in Ireland. Apparently many Irish families with "Mac Dunshleibhe" surnames suchy as Dunleavy do have such a DNA signature. Mac Dunshleibhe DNA. 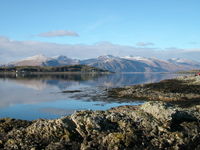 The Isle of Lismore and the hills of Kingairloch beyond.
See also: Saint Moluag

Saint Moluag was a Scottish missionary, and a contemporary of Saint Columba, who evangelized the Picts of Scotland in the sixth century. According to the Irish Annals, in 562 Saint Moluag beat Saint Columba in a race to the large Isle of Lismore. The nineteenth century historian William F. Skene claimed the Isle of Lismore was the sacred island of the Western Picts and the burial place of their kings whose capital was at Beregonium, across the water at Benderloch.

The Coarb, or successor, of the saint was the hereditary keeper of his pastoral staff. The Great Staff of Saint Moluag, or Bachuil Mor is thought to be the sixth century saint's crozier or staff.[8] The Bachuil Mor is a plain wooden staff that is about 38 inches long. There is evidence that the Bachuil Mor was at one time covered with plates of gilt copper of which some remain.[10] On December 21, 1950 on the petition of Livingstone of Bachuil, the Lord Lyon King of Arms ruled that Livingstone was the Coarb of Saint Moluag. Livingstone's ancestor Iain McMolmore Vic Kevir appears in a charter of 1544 as "with keeping of the great staff of the blessed Moloc, as freely as the father, grandfather and great-grandfather and other predecessors of the said Iain."[8]

Since St. Moluag was the founder and head of three schools (Lismore, Rosemarkie and Mortlach) and several subordinate monasteries, he is viewed as a "sovereign lord" by the Lord Lyon. As his successor, the Coarb is viewed as a sovereign baron and is granted a unique Cap of Maintenance of Gules doubled Vair to place in his coat of arms.

Despite claiming ancient heritage the clan was not formally recognised by the Lord Lyon until 2003. The first clan chief of Clan MacLea to be recognised was William Jervis Alastair Livingstone of Bachuil, in 2003. The late chief represented the clan as a member of the Standing Council of Scottish Chiefs.[11] William Jervis Alastair Livingstone of Bachuil died in February 2008 and was succeeded by his son Niall.[12][13] 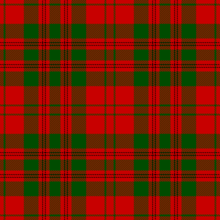 Modern Livingstone tartan. Although the Livingstones or MacLeas are associated with the Buchanans, MacDougalls and the Stewarts of Appin, the tartan sett does not resemble that of any of these clans. The tartan most closely resembles the MacDonell of Keppoch tartan.[15] 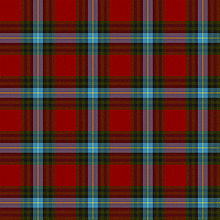 Livingstone or MacLay tartan. This tartan is based upon the Maclaine of Lochbuie tartan which dates before 1810.

This tartan is very similar to the MacDonald of Keppoch tartan.[18]