Chakravartin (चक्रवर्तिन् cakravartin, Pali Cakkavatti), is a term used in Indian religions for an ideal universal ruler, who rules ethically and benevolently over the entire world. Such a ruler's reign is called sarvabhauma. It is a bahuvrīhi, literally meaning "whose wheels are moving", in the sense of "whose chariot is rolling everywhere without obstruction". It can also be analyzed as an 'instrumental bahuvrīhi: "through whom the wheel is moving" in the meaning of "through whom the Dharmacakra ("Wheel of the Dharma) is turning" (most commonly used in Buddhism and Hinduism). 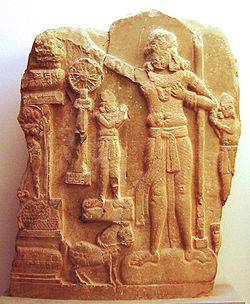 In Buddhism and Jainism, three types of Chakravartins are distinguished:[1]

The first references to a cakravala cakravartin appear in monuments from the time of the Maurya Empire (322–185 BCE), dedicated to Ashoka. It has not been generally used for any other historic figure. The cakravartin in Buddhism came to be considered the secular counterpart of a Buddha. In the Majjhima Nikaya, Gautama Buddha is quoted as stating that a woman can never be(come) a chakravartin. [2] Bhikkhuni Heng-Ching Shih states referring to women in Buddhism: "Women are said to have five obstacles, namely being incapable of becoming a Brahma King, 'Sakra', King 'Mara', Cakravartin or Buddha."[3][4]

In general, the term applies to temporal as well as spiritual kingship and leadership, particularly in Buddhism and Jainism. In Hinduism, the term generally denotes a powerful ruler, whose dominion extended to the entire earth.

The Maitrayaniya Upanishad (1.5) uses the term for kings who had renounced their royal prerogatives in favour of asceticism.

In the Mahabharata, twelve princes beginning with Bharata are considered Chakravartins.

During the each motion of the half-cycle of the wheel of time, 63 Śalākāpuruṣa or 63 illustrious men, consisting of the 24 Tīrthaṅkaras and their contemporaries regularly appear.[8] The Jain universal or legendary history is basically a compilation of the deeds of these illustrious men. As per Jain cosmology, out of these 63, twelve are Chakravartins, who are Universal Monarch or World Conquerors. The Jaina Puranas give a list of twelve such Cakravartins who flourished in this Avasarpini. Golden in complexion, they all belonged to the Kasyapa gotra. The mother of a Cakravartin sees some dreams at the time of conception. According to the Adipurana, Bharata's mother saw the sun and the moon, the mount Meru, the lake with swans, earth and the ocean. According to Acharya Hemachandra, Marudevi, mother of Bharata, sees fourteen great dreams.[9] A chakravartin is considered an ideal human being endowed with thirty-two major signs of excellence and many minor signs of excellence.

The list of 12 Chakravartins as per Jainism is as follows:[10]

In Jainism, a chakravartin was characterized by possession of saptaratna, or "seven jewels":

Some lists cite navaratna or "nine jewels" instead, adding "prime minister" and "son".

from Buddhist Wisdom Books, The Diamond Sutra and the Heart Sutra, translated and explained by Edward Conze

from The Diamond That Cuts Through Illusion [11], commentaries on the Prajñaparamita Diamond Sutra, Thich Nhat Hanh