Education in Cuba has been a highly ranked system for many years. The University of Havana was founded in 1727 and there are a number of other well-established colleges and universities. Following the 1959 revolution, the Castro government nationalized all educational institutions, and created a system operated entirely by the government. Strong ideological content is present, with the constitution stating that educational and cultural policy is based on Marxist ideology.[5]

The Spanish colonized Cuba until 1898 and left the country with an illiteracy rate of 63.9%.[7] By the early 1900s Cuba’s had a strong educational system, but it was only attended by half of the country’s children. Schools were not accessible to the poorest Cubans and this resulted in a low literacy rate for the country compared to the city. Prior to 1959, of the Cubans over the age of 15 years, 22% were found to be illiterate and 60% of the country was found to be semi illiterate because many rural Cubans had a third-grade education or less.[8] After the Cuban Revolution, the new government placed the reconstruction of the education system as a top priority. A list of five key objectives was devised and used to frame Cuba’s educational system. Elementary school became mandated and more importantly available for all children. Many children who lived in poverty were now able to acquire an education for free providing them with an opportunity that eluded them prior to the revolution.

Following the basic restructuring and reopening of Cuban schools, the new government focused on the huge literacy problem the country faced. By April 1959, 817 literacy centers were opened[9] and to further reach out to all, teens and other volunteers were sent out to the countryside to teach their fellow Cubans how to read. The Literacy Campaign served two purposes; first, to educate every single Cuban and teach them to read, then, to give those who live in the city a chance to experience rural living. In a short time Cuba’s new government made vast changes to the educational system and by 2000 97% [10] of Cubans aged 15–24 were literate. Literacy provided poor uneducated Cubans a better standing within the country and the world. Education was vital to the new government and the leaders believed that for Cuba to be strong, and for citizens to be active participants in society, they must be educated.

Private universities were nationalized without reimbursement along with private schools in 1961.

The Cuban Revolution in 1959 brought numerous changes to the country, especially for women. Prior to the Revolution many women lived as housewives and for those who needed to work there were very few choices. Many women in rural areas worked in agriculture and for women in the city working as a maid or prostitute was the only choice. The Federation of Cuban Women was founded in August 1960 with a clear goal to involve all women in Cuban affairs. After years of being excluded, the women of Cuba began to play an active role in the government. The FMC wanted to see women involved with the social, political, economical and cultural issues Cuba faced.[11] This required that schools and programs be built built to provide multiple services to Cuban women.

The Literacy Campaign was created to increase Cuba’s literacy rate and also to initiate communication between the country and city.[12] Students and volunteers went to rural areas to teach other country men to read and provide information on current Cuban politics. Rural women received schooling and job training if they choose to, which allowed them to work outside of agriculture. For women working as prostitutes in the cities the New Government created programs to reeducate them once prostitution became illegal in 1961. Separate but similar programs were created for maids, offering schooling and job training along with free daycare and housing, which allowed the women full opportunity to rebuild their lives. Healthcare was provided focusing on the mental health of Cuban women that had previously been oppressed in the work place.[13] Skills to rebuild confidence and pride were taught because the New Government believed that all women deserved dignity even those in the service industry. The Cuban Revolution brought about drastic change for women allowing them to become very active in their own country, which is what many in the revolution hoped for.[citation needed]

In 1995, the literacy rate was 96%. This was second after Argentina of thirteen Latin American countries surveyed.[14]

A 1998 study by UNESCO reported that Cuban students showed a high level of educational achievement. Cuban third and fourth graders scored 350 points, 100 points above the regional average in tests of basic language and mathematics skills. The report indicated that the test achievement of the lower half of students in Cuba was significantly higher than the test achievement of the upper half of students in other Central and South American countries in the study group.[15][16]

The 1998 study by UNESCO was particularly impressive, because for the first time all of the countries in the study had agreed on the indicators and procedures in advance. Also, the study was taken during the height of an economic depression; Cuba’s economic development has been severely restricted by the U.S. trade embargo. Cuba is one of the poorest countries in the region and lacks basic resources yet still leads Latin America in primary education in terms of standardized testing.[17] The fact of a relatively poor economy and a long-term continuous blockade on trade makes the Cubans' achievements more impressive. For the past forty years, education has been a top priority for the Cuban government.[18] Cuba maintains twice the amount of public spending on education as its more wealthy neighbors, at 10% of GNP.[19] Cuba shows how important education is by keeping a student to teacher ratio of 12 to 1, which is approximately half of the Latin American average. In addition the youth illiteracy rate in Cuba is close to zero, a figure unmatched by all other Latin American countries.[20] Cuban schools are closely integrated with the community. Teachers are very active in the communities of the children that attend their schools, and build strong relationships with parents and families to enhance the learning process. It has been demonstrated that there is a strong commitment to the educational sector on the part of the government[citation needed]. Equal opportunity for a high quality education for all students is one of the key factors that explains that the Cuban educational success is not a miracle or an accident, but the result of many years of concerted efforts and commitments, by the government to its people.[19] 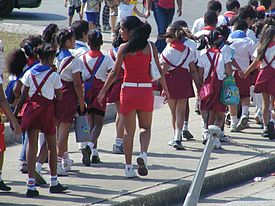 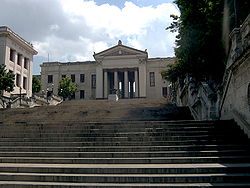 University of Havana, founded in 1728

Distance Education is offered in 15 centres across the country, which provide regular afternoon and evening courses for workers. The scheme offers five degrees in Law, History, Scientific and Technological Information, Accounting and Finance and Economics. There are approximately 20,000 students taking the five degrees offered in all the centres of the country, about 50% of whom are at the Universidad de La Habana. These studies are offered as evening or correspondence courses (week-ends) and generally last for six years. There are also 'guided' or free courses open to all secondary school or higher education graduates.[23]

To enter university, students must pass an entry examination to show they possess the basic knowledge required. Candidates for distance education must have completed secondary school, have at least one year's work experience, be between 25 and 35 years of age and pass an entrance examination. Membership in the Communist Party also affects a student's chances of being admitted to any of Cuba's universities.

The Ministry of Higher Education (Ministerio de Educación Superior, MES) is responsible for policy in matters of undergraduate and postgraduate education. It controls teaching, methodology, courses and programs and the allocation of student places, as well as the specialization courses offered by centres of higher education that come under the control of other ministries. All institutions have the same status. In 1979 the Cuban Ministry of Higher Education initiated a scheme of Distance Education. 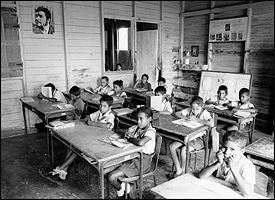 A four-year course is provided for pre-primary and primary/basic school teachers at the Institutos Superiores Pedagógicos. They obtain the "Licenciado en Educación Primaria" (Certificate in Primary Education) or other types of degrees. Admission to these courses is based on the Bachillerato. Higher education students are offered specialized upgrading courses in the subjects they teach as well as teacher training courses. Many teachers are professionals from the production field. Where teachers are specially selected graduate students, as has mostly been the case in the last ten years, they receive initial teacher training simultaneously with their studies.

Although education is free to Cuban citizens, foreign students wishing to study in Cuba pay tuition fees of between US$4000-7000. Foreign students must hold a Bachelors or an equivalent degree, have a visa and follow compulsory Spanish classes. Preparatory facilities offer courses in Spanish. During the 2000-01 school year Cuba allowed 905 U.S. students to visit and study.[24] In 1999 a scheme was implemented to attract students to study medicine in Cuba from less privileged backgrounds in the United States, Britain and Latin American, Caribbean, and African nations.[25] Cuba currently hosts 3432 medical students from 23 nations studying in Havana.[26]

However, Cuba has also provided state subsidized education to foreign nationals under specific programs, including U.S. students who are trained as doctors at the Latin American School of Medicine. The program provides for full scholarships, including accommodation, and its graduates are meant to return to the US to offer low-cost healthcare.[2][3]

In 2006 Venezuela and Cuba began jointly sponsoring education programs in El Palomar, Bolivia.[27] Cuba also maintains close co-operation on education with the United Kingdom[28] and other nations in the European Union.[29] In 2002 the Minister for Education in the Welsh Assembly Government Jane Davidson and representatives of the Universities of Swansea and Glamorgan in Wales visited Cuba to create provisions for officials in Britain and Cuba to liaise over educational projects.[30] In the United States, the Cuban and Caribbean Studies Institute, a part of Tulane University, has developed relations with Cuban counterpart organizations for the purposes of academic collaboration and exchange, curricular development, cultural exchange and international development and dialogue.