The town is also the administrative centre of the larger Daventry district, which has a population of 71,838. The town is 77 miles (124 km) north-northwest of London, 13.9 miles (22.4 km) west of Northampton and 10.2 miles (16.4 km) southeast of Rugby.[1] Daventry is near the M1 motorway with access to two junctions to the northeast and southeast of the town. The town is also served by the A45 and the A361. The nearest railway station is at Long Buckby where access is gained to the London Midland services to Birmingham New Street and Northampton, on the Northampton loop of the West Coast Main Line. Inter-city services (Virgin Trains) can be accessed from Rugby railway station. The nearest major international airport is at Birmingham International.

Daventry now has a lot of estates, which include: Drayton, Middlemore Farm, Lang Farm, Ashby Fields, Royal Oak, Timken, Stefan Hill, The Grange, the Headlands and the Southbrook and Borough Hill.

The town comprises a historic market centre surrounded by much modern housing and light industrial development. On the edge of the town centre is the popular Daventry Country Park and reservoir, just east of the A425.

The town once had a railway station on the former LNWR branch-line from Weedon to Leamington Spa, but it was closed in September 1958. The local weekly newspaper, the Daventry Express, is nicknamed 'The Gusher', after the steam engine that used to serve the town.

Nearby places to Daventry include: Rugby, Southam, Banbury, Northampton and Coventry. The town is twinned with Westerburg, Germany.

An alternative pronunciation for Daventry used by locals is 'Daintree,' but this has become less common.[2][3]

On the 653-foot (199 m)-high Borough Hill that overlooks the town, remains have been found of an Iron Age hill fort – one of the largest found in Britain. Remains have also been found on the hill of a Roman villa.

Daventry began as a small Anglo-Saxon village in around 920 and by the 12th century had become home to a priory. In 1255 Daventry was granted a charter to become a market town. In 1576 Queen Elizabeth I granted Daventry borough status.

The town was mentioned by William Shakespeare in Henry VI, Part I, which refers to "the red-nosed innkeeper of Daintree".

The earliest form of the name of Daventry, the Celtic dwy-afon-tre, "the town of two avons,"(i.e. "the town of two rivers"), describes its geographical situation between the nearby sources of the River Leam, which flows west, and the River Nene which flows east.[4] The "Daintree" Shakespeare wrote about, the name persisting to this day, spelt Danetre, grew from a tradition that Danish settlers planted an oak tree on the summit of Borough Hill to mark the centre of England. This part of the town's history is reflected in the town's seal of a Viking/Saxon axeman and an oak tree. The town appears as Dauentre on the Christopher Saxton map of 1637.

During the English Civil War, the army of King Charles I stayed at Daventry in 1645 after storming the Parliamentary garrison at Leicester and on its way to relieve the siege of Oxford. The Royalist army, made up of 5,000 foot and as many horse, camped on Borough Hill (then spelt Burrow Hill) while Charles went hunting in the nearby forests.

According to local legend, it was during his stay at the Wheatsheaf Inn in Daventry that Charles was twice visited by the ghost of his former adviser and friend, Thomas Wentworth, 1st Earl of Strafford, who advised him to keep heading north and warned him that he would not win through force of arms.

However, Parliament's newly formed New Model Army, led by Sir Thomas Fairfax, was marching north from besieging Oxford after being instructed to engage the king's main army. Fairfax's leading detachments of horse clashed with Royalist outposts near Daventry on the 12th of June, alerting the king to the presence of the Parliamentary army. The Royalists made for their reinforcements at Newark-on-Trent but after reaching Market Harborough turned to fight, which resulted in the decisive Battle of Naseby. The village of Naseby is approximately 14 miles (23 km) northeast of Daventry.

The main roads from London to Holyhead passed through Daventry and the town for centuries flourished as a coaching town. There were many coaching inns in the town of which only the Dun Cow, Saracens Head and the Coach and Horses remain as inns.

But when the London and Birmingham Railway was opened in 1838 the coaching trade slumped and the town entered a long period of stagnation and decline which lasted for over a century. The Industrial Revolution largely passed Daventry by owing to its poor transport links. The canals passed around Daventry, although the Grand Junction Canal (now Grand Union) passed a few miles north. A branch from the Grand Union Canal to Daventry was proposed but was never built.[5]

The railways did not connect Daventry until quite late in the 19th century. Although the town was only a few miles from the main London to Birmingham line it took until 1888 before a branch line was built from Weedon to Daventry railway station. In 1895 the line was extended to Leamington Spa, although being only a branch line this failed to spur much growth. Daventry's economy remained largely rural, with shoemaking as the main industry. 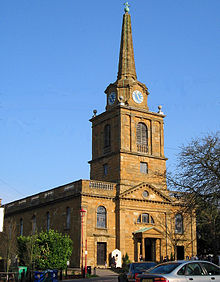 Holy Cross is the parish church of Daventry and is the only 18th century town church in Northamptonshire.[6] It was built between 1752 and 1758 by David Hiorne and is constructed of the local ironstone. The western elevation is broad with large pilasters at the angles and the angles of the centre bay. The entrance porch was added in 1951. The tower rises from the centre bay and is square ending with an obelisk spire rising above. Inside, the church has three wooden galleries, to the north, south and west elevations. The pulpit is decorated with marquetry and fretwork and has a staircase with a twisted balusters. Above the altar at the eastern elevation is a three-bayed stained glass window. 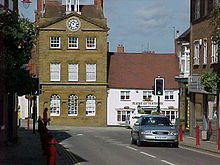 The Moot Hall stands on the north side of the market square next to the Plume of Feathers inn. It was built in 1769[6] from ironstone and has had various uses over the years, including town council building, a women’s prison, the mayor's parlour, town museum and tourist information office and in recent years as an Indian restaurant. The building, which is currently unused, is of two and a half storeys, and has three bays of windows. The main entrance and its porch is on the western elevation where the building is connected to a house built in 1806. The original staircase from the Moot Hall is now installed at Welton Manor House.[6] 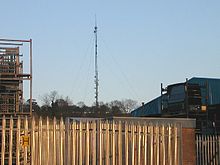 BBC transmitter seen from the town

In 1925 the newly created BBC constructed a broadcasting station on Borough Hill just outside the town. Daventry was chosen because it was the point of maximum contact with the land mass of England and Wales. From 1932 the BBC Empire Service (now the BBC World Service) was broadcast from there. The radio announcement of "Daventry calling" made Daventry well-known across the world. It was the BBC's use of the literal pronunciation in this call-sign that resulted in the widespread displacement of the historical pronunciation "Daintree" (ˈdeɪntri), though the latter is still used in some circumstances locally, as in the name of Danetre Hospital. 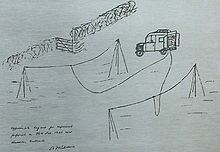 Drawings of the Daventry Experiment

On the early morning of Tuesday 26 February 1935 the radio station at Daventry (Borough Hill) was used for the first-ever practical demonstration of radar, by its inventor Robert Watson-Watt and Arnold Frederic Wilkins, who used a radio receiver installed in a trailer at Stowe Nine Churches (just off the A5 about three miles (5 km) south of Weedon Bec and in the Daventry district) to receive signals bounced off a metal-clad Handley Page Heyford bomber flying across the radio transmissions. The interference picked up from the aircraft allowed its approximate navigational position to be estimated. 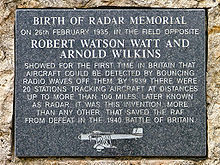 The station closed in 1992 and only one of the radio masts now remains. A busy directional radio beacon (VOR), identifier "DTY", for aircraft is situated approximately 4 miles (6.4 km) south of the town. The town also gives its name to the busy Daventry air traffic control sector.

75 Years to the day (26 February 2010) Teams from the Coventry Amateur Radio Society & The Northhampton Radio Club re-enacted the 'Daventry Experiment'. Signals from GB75RDF at Borough Hill, reflected from aircraft all of which were flown by radio hams, were detected in a receiving set housed in a replica Morrris van. The receiving station set up in the field that is the home to The Birth of RADAR memorial at Litchborough. The report of this to be found at http://www.andrewphotographic.co.uk/g8gmu9c.htm The team was led by Brian Leathley - Andrew G8GMU

The modern growth of Daventry occurred from the 1960s onwards as part of a planned expansion of the town.

Daventry remained a small rural town until the 1950s; in 1950 it had a population of around 4,000. Real growth started in 1955 when the tapered roller bearing manufacturer Timken located a large factory in the town (the factory closed in 2000).[7]

In the early 1960s, Daventry was designated as an 'overspill' to house people and industry moved from Birmingham; a planned expansion was carried out as part of an agreement with Birmingham City Council. The plan did not, however, live up to expectations. The target population was 36,000 by 1981, but actual growth was much slower than this; nevertheless, by 1981 the population had soared to 16,178 and by 2001 it was 22,367. More recently, a new wave of development has been proposed which could take the town's population to about 40,000 by 2021.[8]

In 1974, the old borough of Daventry was abolished and merged into the new Daventry district, which also included a large rural area and had a population of 71,838 in 2001. In 2003, Daventry gained its own Town Council[9] when it became a civil parish. The current mayor of Daventry is Glenda Simmonds 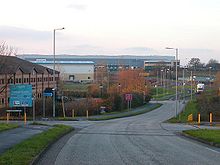 In 2006, the outdoor pool – which had been built and funded by Daventry residents in the 1950s following the drowning of three children in the local reservoir – was closed due funding difficulties.[10] In 2007, Daventry began plans to modernise the town with a futuristic personal rapid transit system that would link outer estates to the town centre, and a canal arm with marina next to the former site of the outdoor pool. 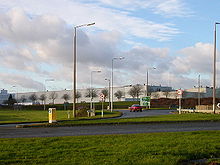 Cummins have their largest UK plant at the town where they manufacture diesel engines.

Owing to its good transport links, Daventry is now a warehousing and distribution centre. North of the town Daventry International Rail Freight Terminal (DIRFT) is a major terminal for freight interchange between road and rail. This is much closer to Rugby than Daventry, being situated just off junction 18 of the M1 (its original northern terminus in 1959 until 1964).

The town is accessed via junction 16 of the M1 and the A45 which bypasses the town via Stefen Way, merging with the A425 along Leamington Way. The town is bypassed to the east by the A425.

Due to the proximity to the M1, Ford opened up a large spare parts distribution warehouse on the Royal Oak Industrial Estate. This 130-acre (0.53 km2) building, the Daventry Parts Depot, took Taylor Woodrow a year to build at a cost of £2.25 m and was for many years considered the largest building in the UK. Wetherspoon's have had their main distribution centre on the Drayton Fields Industrial Estate, north of the town since 2004.

Daventry has two secondary schools: Daventry William Parker - Specialist Humanities College to the north of the town and Danetre School - Specialist Engineering College in the borough towards the east near the BBC transmitter. And they now have a sixth form under the DLP (Daventry Learning Partnership). Sixth form provision is provided by Northampton College (former Daventry Tertiary College).