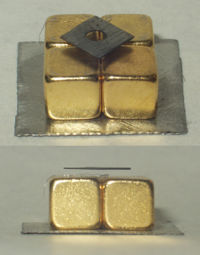 Magnetic levitation, maglev, or magnetic suspension is a method by which an object is suspended with no support other than magnetic fields. Magnetic pressure is used to counteract the effects of the gravitational and any other accelerations.

Earnshaw's theorem proves that using only static ferromagnetism it is impossible to stably levitate against gravity, but servomechanisms, the use of diamagnetic materials, superconduction, or systems involving eddy currents permit this to occur.

In some cases the lifting force is provided by magnetic levitation, but there is a mechanical support bearing little load that provides stability. This is termed pseudo-levitation.

Magnetic materials and systems are able to attract or press each other apart or together with a force dependent on the magnetic field and the area of the magnets, and a magnetic pressure can then be defined.

The magnetic pressure of a magnetic field on a superconductor can be calculated by:

where Pmag is the force per unit area in pascals, B is the magnetic field just above the superconductor in teslas, and μ0 = 4π×10−7 N·A−2 is the permeability of the vacuum.[1]

Static stability means that any small displacement away from a stable equilibrium causes a net force to push it back to the equilibrium point.

Earnshaw's theorem proved conclusively that it is not possible to levitate stably using only static, macroscopic, paramagnetic fields. The forces acting on any paramagnetic object in any combinations of gravitational, electrostatic, and magnetostatic fields will make the object's position, at best, unstable along at least one axis, and it can be unstable equilibrium along all axes. However, several possibilities exist to make levitation viable, for example, the use of electronic stabilization or diamagnetic materials (since relative magnetic permeability is less than one[2]); it can be shown that diamagnetic materials are stable along at least one axis, and can be stable along all axes. Conductors can have a relative permeability to alternating magnetic fields of below one, so some configurations using simple AC driven electromagnets are self stable.

Dynamic stability occurs when the levitation system is able to damp out any vibration-like motion that may occur.

For successful levitation and control of all 6 axes (3 spatial and 3 rotational) a combination of permanent magnets and electromagnets or diamagnets or superconductors as well as attractive and repulsive fields can be used. From Earnshaw's theorem at least one stable axis must be present for the system to levitate successfully, but the other axes can be stabilised using ferromagnetism. 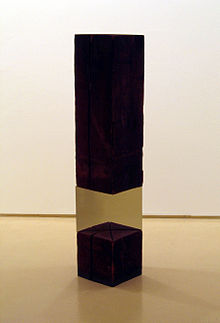 With a small amount of mechanical constraint for stability, pseudo-levitation is relatively straightforwardly achieved.

If two magnets are mechanically constrained along a single vertical axis, for example, and arranged to repel each other strongly, this will act to levitate one of the magnets above the other.

Another geometry is where the magnets are attracted, but constrained from touching by a tensile member, such as a string or cable.

Another example is the Zippe-type centrifuge where a cylinder is suspended under an attractive magnet, and stabilized by a needle beading from below.

Diamagnetism is the property of an object which causes it to create a magnetic field in opposition to an externally applied magnetic field, thus causing a repulsive effect. Specifically, an external magnetic field alters the orbital velocity of electrons around their nuclei, thus changing the magnetic dipole moment. According to Lenz's law, this opposes the external field. Diamagnets are materials with a magnetic permeability less than μ0 (a relative permeability less than 1). Consequently, diamagnetism is a form of magnetism that is only exhibited by a substance in the presence of an externally applied magnetic field. It is generally quite a weak effect in most materials, although superconductors exhibit a strong effect. Diamagnetic materials cause lines of magnetic flux to curve away from the material, and superconductors can exclude them completely (except for a very thin layer at the surface). 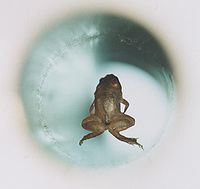 A live frog levitates inside a 32 mm diameter vertical bore of a Bitter solenoid in a magnetic field of about 16 teslas at the High Field Magnet Laboratory of the Radboud University in Nijmegen the Netherlands. Direct link to video

Earnshaw's theorem does not apply to diamagnets. These behave in the opposite manner to normal magnets owing to their relative permeability of μr < 1 (i.e. negative magnetic susceptibility).

Diamagnetic levitation can be used to levitate very light pieces of pyrolytic graphite or bismuth above a moderately strong permanent magnet. As water is predominantly diamagnetic, this technique has been used to levitate water droplets and even live animals, such as a grasshopper, frog and a mouse. However, the magnetic fields required for this are very high, typically in the range of 16 teslas, and therefore create significant problems if ferromagnetic materials are nearby.

The minimum criterion for diamagnetic levitation is

Assuming ideal conditions along the z-direction of solenoid magnet: 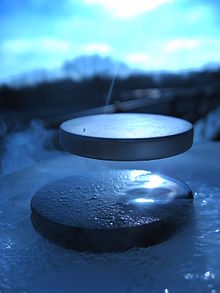 A superconductor levitating a permanent magnet

In trains, a very strong magnetic field is required to levitate a massive train, the JR–Maglev have superconducting magnetic coils. JR–Maglev levitation is not by Meissner effect.

Levitron is an example of spin stabilized magnetic levitation

A magnet can be levitated against gravity when gyroscopically stabilized by spinning it in a toroidal field created by a base ring of magnet(s). However, it will only remain stable until the rate of precession slows below a critical threshold—the region of stability is quite narrow both spatially and in the required rate of precession. The first discovery of this phenomenon was by Roy Harrigan, a Vermont inventor who patented a levitation device in 1983 based upon it.[4] Several devices using rotational stabilization (such as the popular Levitron toy) have been developed citing this patent. Non-commercial devices have been created for university research laboratories, generally using magnets too powerful for safe public interaction. 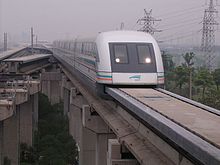 The Transrapid system uses servomechanisms to pull the train up from underneath the track and maintains a constant gap while travelling at high speed
Main article: Electromagnetic suspension

The attraction from a fixed strength magnet decreases with increased distance, and increases at closer distances. This is unstable. For a stable system, the opposite is needed, variations from a stable position should push it back to the target position.

Stable magnetic levitation can be achieved by measuring the position and speed of the object being levitated, and using a feedback loop which continuously adjusts one or more electromagnets to correct the object's motion, thus forming a servomechanism.

Either system represents examples of ElectroMagnetic Suspension (EMS). For a very simple example, some tabletop levitation demonstrations use this principle, and the object cuts a beam of light to measure the position of the object. The electromagnet is above the object being levitated; the electromagnet is turned off whenever the object gets too close, and turned back on when it falls further away. Such a simple system is not very robust; far more effective control systems exist, but this illustrates the basic idea.

EMS magnetic levitation trains are based on this kind of levitation: The train wraps around the track, and is pulled upwards from below. The servo controls keep it safely at a constant distance from the track.

These schemes work due to repulsion due to Lenz's law. When a conductor is presented with a time-varying magnetic field electrical currents in the conductor are set up which create a magnetic field that causes a repulsive effect.

Relative motion between conductors and magnets

If one moves a base made of a very good electrical conductor such as copper, aluminium or silver close to a magnet, an (eddy) current will be induced in the conductor that will oppose the changes in the field and create an opposite field that will repel the magnet (Lenz's law). At a sufficiently high rate of movement, a suspended magnet will levitate on the metal, or vice versa with suspended metal. Litz wire made of wire thinner than the skin depth for the frequencies seen by the metal works much more efficiently than solid conductors.

Halbach arrays are also well-suited to magnetic levitation and stabilisation of gyroscopes and electric motor and generator spindles.

A conductor can be levitated above an electromagnet (or vice versa) with an alternating current flowing through it. This causes any regular conductor to behave like a diamagnet, due to the eddy currents generated in the conductor.[6][7] Since the eddy currents create their own fields which oppose the magnetic field, the conductive object is repelled from the electromagnet, and most of the field lines of the magnetic field will no longer penetrate the conductive object.

This effect requires non-ferromagnetic but highly conductive materials like aluminium or copper, as the ferromagnetic ones are also strongly attracted to the electromagnet (although at high frequencies the field can still be expelled) and tend to have a higher resistivity giving lower eddy currents. Again, litz wire gives the best results.

The effect can be used for stunts such as levitating a telephone book by concealing an aluminium plate within it.

At high frequencies (a few tens of kilohertz or so) and kilowatt powers small quantities of metals can be levitated and melted using levitation melting without the risk of the metal being contaminated by the crucible.[8]

One source of oscillating magnetic field that is used is the linear induction motor. This can be used to levitate as well as provide propulsion.

Earnshaw's theory strictly only applies to static fields. Alternating magnetic fields, even purely alternating attractive fields,[9] can induce stability and confine a trajectory through a magnetic field to give a levitation effect.

This is used in particle accelerators to confine and lift charged particles, and has been proposed for maglev trains also.[9]

Magnetic fields are conservative forces and therefore in principle have no built-in damping, and in practice many of the levitation schemes are under-damped and in some cases negatively damped.[10] This can permit vibration modes to exist that can cause the item to leave the stable region.

Damping of motion is done in a number of ways:

Most of the levitation techniques have various complexities.

Maglev, or magnetic levitation, is a system of transportation that suspends, guides and propels vehicles, predominantly trains, using magnetic levitation from a very large number of magnets for lift and propulsion. This method has the potential to be faster, quieter and smoother than wheeled mass transit systems. The technology has the potential to exceed 6,400 km/h (4,000 mi/h) if deployed in an evacuated tunnel.[11] If not deployed in an evacuated tube the power needed for levitation is usually not a particularly large percentage and most of the power needed is used to overcome air drag, as with any other high speed train.

The highest recorded speed of a maglev train is 581 kilometers per hour (361 mph), achieved in Japan in 2003,[12] 6 km/h faster than the conventional TGV speed record. This is slower than many aircraft, since aircraft can fly at far higher altitudes where air drag is lower, thus high speeds are more readily attained.

Electromagnetic levitation (EML), patented by Muck in 1923 [13], is one of the oldest levitation techniques used for containerless experiments.[14] The technique enables the levitation of an object using electromagnets. A typical EML coil has reversed winding of upper and lower sections energized by a radio frequency power supply.