The time it takes for a single parent atom to decay to an atom of its daughter isotope can vary widely, not only for different parent-daughter chains, but also for identical pairings of parent and daughter isotopes. While the decay of a single atom occurs spontaneously, the decay of an initial population of identical atoms over time, t, follows a decaying exponential distribution, e−λt, where λ is called a decay constant. Because of this exponential nature, one of the properties of an isotope is its half-life, the time by which half of an initial number of identical parent radioisotopes have decayed to their daughters. Half-lives have been determined in laboratories for thousands of radioisotopes (or, radionuclides). These can range from nearly instantaneous to as much as 1019 years or more.

The intermediate stages often emit more radioactivity than the original radioisotope. When equilibrium is achieved, a granddaughter isotope is present in proportion to its half-life; but since its activity is inversely proportional to its half-life, any nuclide in the decay chain finally contributes as much as the head of the chain. For example, natural uranium is not significantly radioactive, but pitchblende, a uranium ore, is 13 times more radioactive because of the radium and other daughter isotopes it contains. Not only are unstable radium isotopes significant radioactivity emitters, but as the next stage in the decay chain they also generate radon, a heavy, inert, naturally occurring radioactive gas. Rock containing thorium and/or uranium (such as some granites) emits radon gas that can accumulate in enclosed places such as basements or underground mines. Radon exposure is considered the leading cause of lung cancer in non-smokers.[1]

This diagram illustrates the four decay chains discussed in the text: thorium (in blue), radium (in red), actinium (in green), and neptunium (in purple).

The four most common modes of radioactive decay are: alpha decay, beta decay, inverse beta decay (considered as both positron emission and electron capture), and isomeric transition. Of these decay processes, only alpha decay changes the atomic mass number (A) of the nucleus, and always decreases it by four. Because of this, almost any decay will result in a nucleus whose atomic mass number has the same residue mod 4, dividing all nuclides into four classes. The members of any possible decay chain must be drawn entirely from one of these classes. All four chains also produce helium-4 (alpha particles are helium-4 nuclei).

Three main decay chains (or families) are observed in nature, commonly called the thorium series, the radium series, and the actinium series, representing three of these four classes, and ending in three different, stable isotopes of lead. The mass number of every isotope in these chains can be represented as A = 4n, A = 4n + 2, and A = 4n + 3, respectively. The long-lived starting isotopes of these three isotopes, respectively thorium-232, uranium-238, and uranium-235, have existed since the formation of the earth. The plutonium isotopes plutonium-244 and plutonium-239 have also been found in trace amounts on earth.[2]

Due to the quite short half-life of its starting isotope neptunium-237 (2.14 million years), the fourth chain, the neptunium series with A = 4n + 1, is already extinct in nature, except for the final rate-limiting step, decay of bismuth-209. The ending isotope of this chain is now known to be thallium-205. Some older sources give the final isotope as bismuth-209, but it was recently discovered that it is radioactive, with a half-life of 1.9×1019 yr.

There are also many shorter chains, for example that of carbon-14. On Earth, most of the starting isotopes of these chains are generated by cosmic radiation.

In the four tables below, the minor branches of decay (with the branching ratio of less than 0.0001%) are omitted. The energy release includes the total kinetic energy of all the emitted particles (electrons, alpha particles, gamma quanta, neutrinos, Auger electrons and X-rays) and the recoil nucleus, assuming that the original nucleus was at rest. The letter 'a' represents a year.

In the tables below (except neptunium), the historic names of the naturally occurring nuclides are also given. These names were used at the time when the decay chains were first discovered and investigated. From these historical names one can locate the particular chain to which the nuclide belongs, and replace it with its modern name.

The three naturally-occurring actinide alpha decay chains given below—thorium, uranium/radium (from U-238), and actinium (from U-235)—each ends with its own specific lead isotope (Pb-208, Pb-206, and Pb-207 respectively). All these isotopes are stable and are also present in nature as primordial nuclides, but their excess amounts in comparison with lead-204 (which has only a primordial origin) can be used in the technique of uranium-lead dating to date rocks. 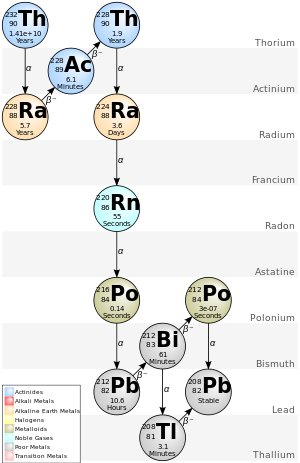 The 4n chain of Th-232 is commonly called the "thorium series." Beginning with naturally occurring thorium-232, this series includes the following elements: actinium, bismuth, lead, polonium, radium, and radon. All are present, at least transiently, in any natural thorium-containing sample, whether metal, compound, or mineral. The series terminates with lead-208. 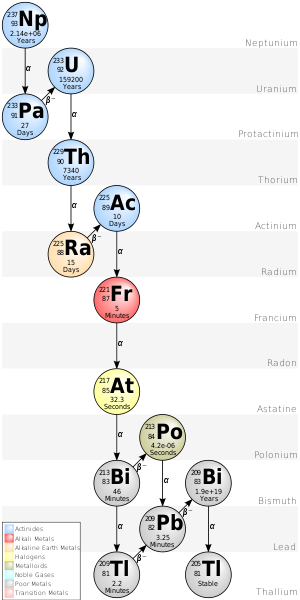 The 4n + 1 chain of Np-237 is commonly called the "neptunium series." In this series, only two of the elements are found naturally, bismuth and thallium. A smoke detector containing an americium-241 ionization chamber accumulates a significant amount of neptunium-237 as its americium decays; the following elements are also present in it, at least transiently, as decay products of the neptunium: actinium, astatine, bismuth, francium, lead, polonium, protactinium, radium, thallium, thorium, and uranium. Since this series was only studied more recently, its nuclides do not have historic names.

The 4n+2 chain of U-238 is commonly called the "radium series" (sometimes "uranium series"). Beginning with naturally occurring uranium-238, this series includes the following elements: astatine, bismuth, lead, polonium, protactinium, radium, radon, thallium, and thorium. All are present, at least transiently, in any natural uranium-containing sample, whether metal, compound, or mineral. The series terminates with lead-206. 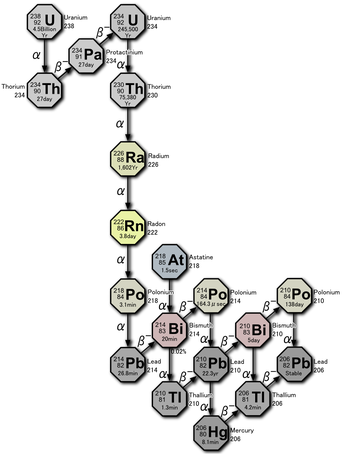 The 4n+3 chain of uranium-235 is commonly called the "actinium series". Beginning with the naturally-occurring isotope U-235, this decay series includes the following elements: Actinium, astatine, bismuth, francium, lead, polonium, protactinium, radium, radon, thallium, and thorium. All are present, at least transiently, in any sample containing uranium-235, whether metal, compound, ore, or mineral. This series terminates with the stable isotope lead-207. 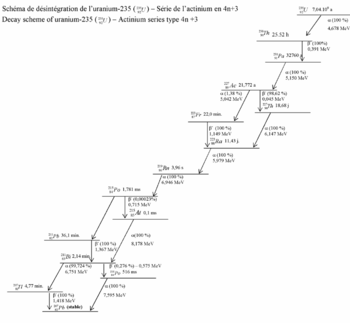 This image gives the detailed routes of uranium-235 decay.

Since the heavy original nuclei always have a greater proportion of neutrons, the fission product nuclei almost always start out with a neutron/proton ratio significantly greater than what is stable for their mass range. Therefore they undergo multiple beta decays in succession, each converting a neutron to a proton. The first decays tend to have higher decay energy and shorter half-life. These last decays may have low decay energy and/or long half-life.