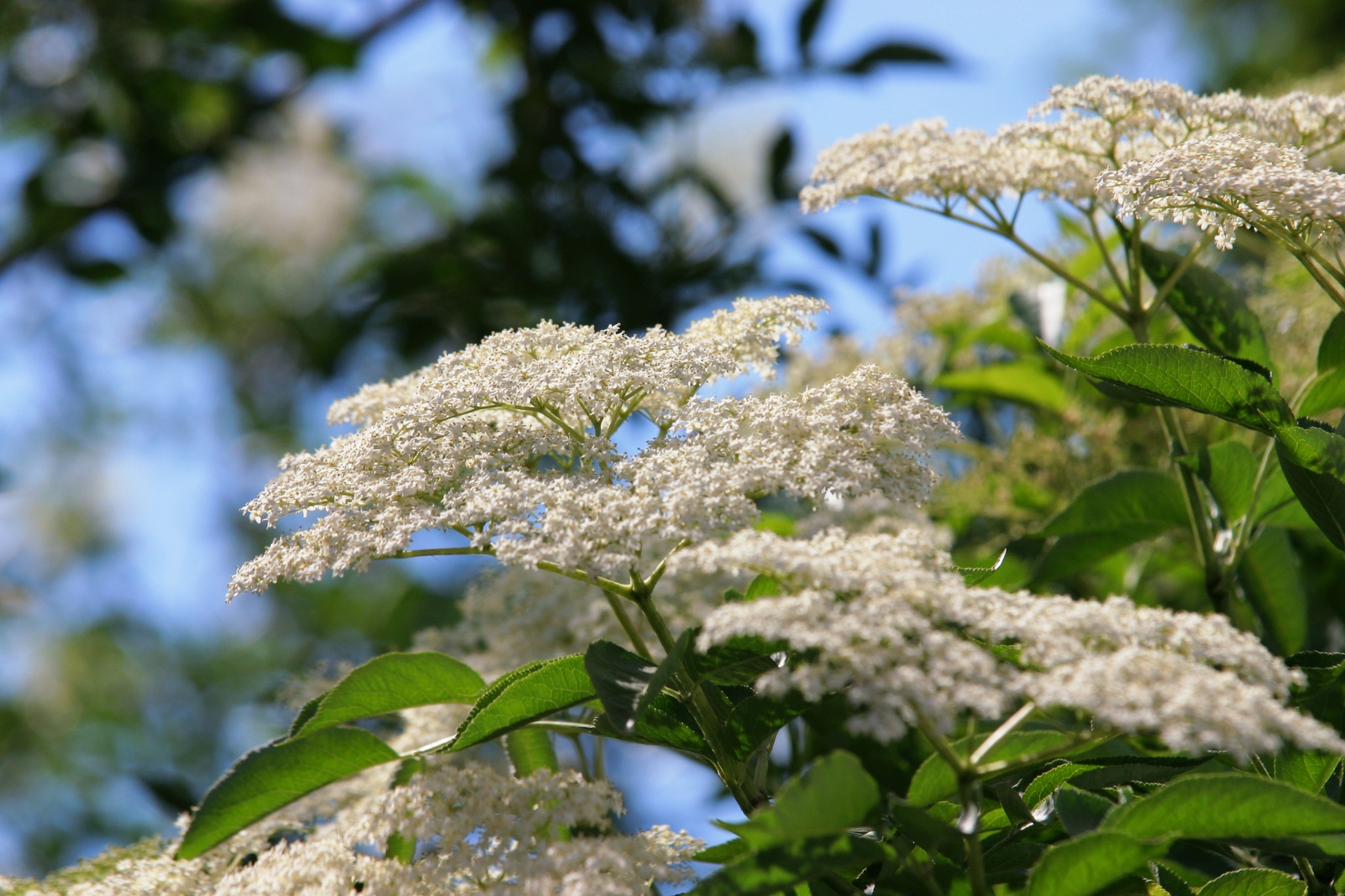 "Sambucus" (Elder or Elderberry) is a genus of between 5 and 30 species of s or small s (two species ), formerly treated in the honeysuckle family , but now shown by genetic evidence to be correctly classified in the moschatel family . The genus is native to temperate to subtropical regions of both the and the ; the genus is more widespread in the Northern Hemisphere, with Southern Hemisphere occurrence restricted to parts of and .

The leaves are opposite, , with 5-9 leaflets (rarely 3 or 11), each leaf 5-30 cm long, the leaflets with a serrated margin. They bear large clusters of small or cream coloured in the late spring, that are followed by clusters of small red, bluish or black (rarely yellow or white) berries.

*The Blackberry Elder "" of western North America is intermediate between the preceding and next groups. The flowers are in rounded s, but the berries are black; it is a small shrub, rarely exceeding 3&ndash;4 m tall. Some botanists include it in the red-berried elder group.

*The dwarf elders are, by contrast to the other species, plants, producing new stems each year from a perennial root system; they grow to 1.5&ndash;2 m tall, each stem terminating in a large flat umbel which matures into a dense cluster of glossy berries.
** "" (Asian Dwarf Elder; Himalaya and eastern Asia; berries red)
** "" (European Dwarf Elder; central and southern Europe, northwest Africa and southwest Asia; berries black)

There are many uses made of . Ornamental forms of many of the species are grown in gardens.

The berries are a very valuable food resource for many s. Elders are used as food plants by the e of some species including , , , Emperor Moth, The Engrailed, and The V-pug. The crushed foliage and immature fruit have a strong fetid smell.

in California are very often found around red or blue elderberry bushes. Females lay their eggs on the bark. Larvae hatch and burrow into the stems.

Dead elder wood is the preferred habitat of the mushroom "", also known as "Judas' ear fungus".

The Elder Tree was supposed to ward off evil influence and give protection from witches, a popular belief held in widely-distant countries. If an elder tree was cut down, a spirit known as the Elder Mother would be released and take her revenge. The tree could only safely be cut while chanting a rhyme to the Elder Mother. [Howard, Michael. "Traditional Folk Remedies" (Century, 1987); pp. 134-5]