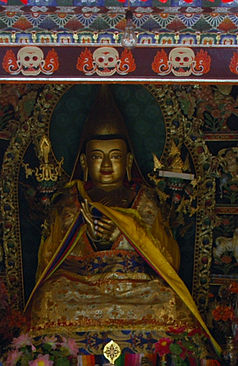 Statue of Je Tsongkhapa, founder of the Gelugpa school, on the altar in His Temple (His birth place) in Kumbum Monastery, near Xining, Qinghai (Amdo), China. Photo by writer Mario Biondi, July 7, 2006

The Gelug or Gelug-pa (or dGe Lugs Pa, dge-lugs-pa, or Dgelugspa), also known as the Yellow Hat sect, is a school of Buddhism founded by Je Tsongkhapa (1357–1419), a philosopher and Tibetan religious leader. The first monastery he established was at Ganden, and to this day the Ganden Tripa is the nominal head of the school, though its most influential figure is the Dalai Lama. Allying themselves with the Mongols as a powerful patron, the Gelug emerged as the pre-eminent Buddhist school in Tibet since the end of the 16th century.

A great admirer of the Kadampa (Bka'-gdams-pa) teachings, Tsongkhapa was an enthusiastic promoter of the Kadam School's emphasis on the mahāyāna principle of universal compassion as the fundamental spiritual orientation. He combined this with a strong emphasis on the cultivation of in-depth insight into the doctrine of emptiness as propounded by the Indian masters Nāgārjuna (2nd century) and Candrakīrti (7th century). Tsongkhapa said that these two aspects of the spiritual path, compassion and insight into wisdom, must be rooted in a wholehearted wish for liberation impelled by a genuine sense of renunciation. He called these the "Three Principal Aspects of the Path", and asserted that it is on the basis of these three that one must embark on the profound path of vajrayāna Buddhism.

The central teachings of the Gelug School are the Stages of the Path (lamrim), based on the teachings of the Indian master Atiśa (c. 11th century) and the systematic cultivation of the view of emptiness. This is combined with the yogas of highest yoga tantra deities such as Guhyasamāja, Cakrasaṃvara, Yamāntaka and Kālacakra, where the key focus is the direct experience of the indivisible union of bliss and emptiness.

Six commentaries by Tsongkhapa are the prime source for the studies of the Gelug tradition, as follows:

Each Gelug monastery uses its own set of commentarial texts by different authors, known as monastic manuals (Tib. yigcha). The teachings of Tsongkhapa are seen as a protection against developing misconceptions in understanding and practice of mahāyāna and vajrayāna Buddhism. It is said that his true followers take The Great Exposition of the Stages of the Path as their heart teaching.

The Gelug school focuses on ethics and monastic discipline of the vinaya as the central plank of spiritual practice. In particular, the need to pursue spiritual practice in a graded, sequential manner is emphasized. Arguably, Gelug is the only school of vajrayāna Buddhism that prescribes monastic ordination as a necessary qualification and basis in its teachers (lamas / gurus).[citation needed] Lay people are usually not permitted to give initiations if there are teachers with monastic vows within close proximity. This discipline was laid down by Tsongkhapa as a mechanism intended to help prevent Buddhist teachings from degeneration. Je Rinpoche through his unsurpassed wisdom and direct perception of Manjuśri has shown sentient beings a view of how vajrayāna teachings can be practiced without compromising vinaya.

Tsongkhapa founded the monastery of Ganden in 1409 as his main seat. He had many students, his two main disciples being Gyaltsab Je (1364–1431) and Khedrub Je (1385–1438). Other outstanding disciples were Togden Jampal Gyatso, Jamyang Choje, Jamchenpa Sherap Senge and Gyalwa Gendün Drup, the 'first' Dalai Lama (1391–1474). After Tsongkhapa's passing, his teachings were held and spread by Gyaltsab Je and Khedrub Je who were his successors as abbots of Ganden monastery. The lineage is still held by the Ganden Tripas – the throne-holders of Ganden Monastery – among whom the present holder is Khensur Lungri Namgyal, the 101st Ganden Tripa (and not, as often misunderstood, by the Dalai Lama).

Labrang Monastery, in Xiahe County in Gansu province (and in the traditional Tibetan province of Amdo), was founded in 1709 by the first Jamyang Zhaypa, Ngawang Tsondru. Many Gelug monasteries were built throughout Tibet as well as in China and Mongolia.

Vajrayāna Practice in the Gelug

Sonam Gyatso, who was considered to be the third incarnation of Gyalwa Gendün Drup,[2] formed an alliance with the then most powerful Mongol leader, Altan Khan, in 1577.[3] As a result, he was designated as "Dalai" (a translation into Mongolian of the name Gyatso, meaning ocean),[4] and Gyalwa Gendün Drup and Gendun Gyatso were posthumously recognized as the 1st and 2nd Dalai Lamas.[5] Sonam Gyatso was very active in proselytizing among the Mongols,[6] and the Gelug tradition was to become the main spiritual orientations of the Mongols in the ensuing centuries.[7] This brought the Gelugpas powerful patrons who were to propel them to pre-eminence in Tibet.[8] The Gelug-Mongol alliance was further strengthened as after Sonam Gyatso's death, his incarnation was found to be Altan Khan's great-grandson.[9]

By the end of the 16th century, following violent strife among the sects of Tibetan Buddhism, the Gelug school emerged as the dominant one. According to Tibetan historian Samten Karmay, "Sonam Chophel[10] (1595-1657), treasurer of the Ganden Palace, was the prime architect of the Gelug's rise to political power. Later he received the title Desi [Wylie: sde-sris], meaning "Regent", which he would earn through his efforts to establish Gelugpa power."[11] From the period of Lozang Gyatso, 5th Dalai Lama in the 17th century, the Dalai Lamas held political control over central Tibet. In the course of this reign, the Jonang school was forcibly converted to the Gelug tradition as punishment for treason, along with some Kagyu and Nyingma monasteries.

Scottish Botanist George Forrest, who witnessed the 1905 Tibetan Rebellion led by the Gelug Lamas, wrote that the majority of the people in the Mekong valley in Yunnan were Tibetan. The Tibetan Buddhist Yellow Sect was the dominant power in the region, with their Lamas effectively governing the area. Forrest had a negative view of their reign, since according to him they used "force and fraud" to "terrorise the... peasantry". The Lamas completely ignored the Imperial Qing authorities in the region.[12]